Everton moving on from SportPesa, who comes in next?

Share All sharing options for: Everton moving on from SportPesa, who comes in next?

With a somewhat surprise statement yesterday, Everton announced that they would be ending their five-year kit sponsorship deal with gambling firm SportPesa.

The Toffees signed the deal in the summer of 2017, but with two seasons left on the contract, it appears the two sides have reached a mutual agreement to part ways at the end of this season.

“This has been a difficult decision but one that allows us to best deliver on our commercial plan and to grasp the new opportunities now open to us.

”The club would like to thank SportPesa for all of the work that has been done together. Our partnership has seen our first team visit Africa on two occasions, as well as former players and club staff take part in numerous activations in the region.

”This has allowed us to grow our own footprint in Africa and further strengthen our special relationship with the continent.”

The Blues being sponsored by a betting company did not sit well for many fans, especially considering the Club’s close ties with charity work through Everton in the Community. When questioned by supporters during the January Annual General Meeting, club CEO Denise Barrett-Baxendale admitted that the club would prefer to sign up with a different sponsor in the future.

”I think you raise a good point. The company that we deal with has responsible gambling and we know our sport is underpinned by gambling.

”In an ideal world moving forward we would look to have a different type of sponsor on the front of our shirts like all football clubs would, but that is a commercial decision that we make as a football club.”

Everton’s current deal is worth about £9.6 million per year, only surpassed by West Ham United’s £10m outside the top six clubs, who all start at £35m (Tottenham Hotspur) and go all the way to £64m (Manchester United). 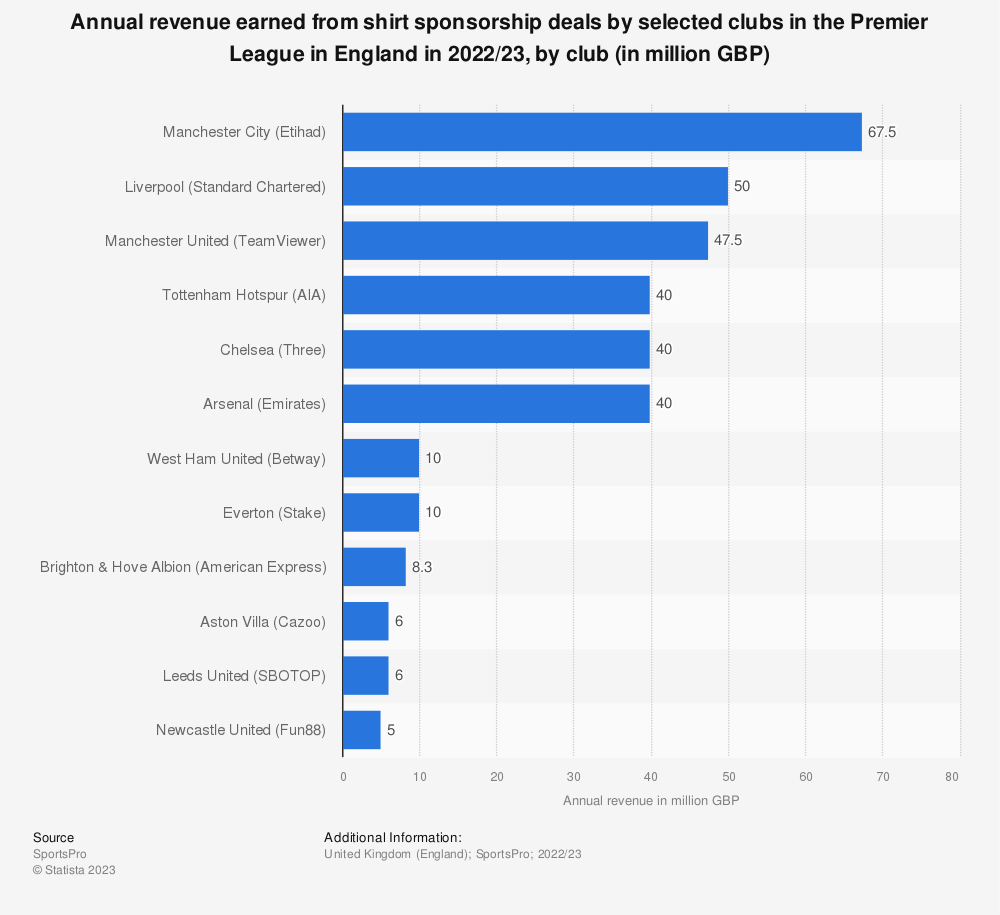 In recent months, there has been an uptick in sponsorship activity for the Blues, with Farhad Moshiri’s business partner Alisher Usmanov ramping up his involvement with the club through his firms USM and MegaFon.

If money was not an object, then the Toffees signing a deal with either of Usmanov’s firms for the comparable sum of what the top six sides are getting could be a way to inject cash into the club’s transfer fund kitty. Financial Fair Play rules dictate that sponsorship deals need to be of fair market value, so Everton will need to somehow convince the authorities - should it come to it - that even as a club outside the top six they still deserve a kit sponsorship comparable to those sides.

Of course, these issues could be easily bypassed if the Blues can find an unrelated kit sponsor that can get the club a deal closer to the top sides.

The name emblazoned on the front of the kit is important as a brand ambassador for the football club, and we’ll wait keenly to hear who Everton have in mind for their next shirt sponsor.