The Royal Blue Mersey Fantasy Football League keeps chugging along, and here's your leaderboard after three weeks. Click on the link for the Fantasy Football hub with a listing of all the articles so far.

Some changes, some people holding steady - click here to check out your position. It's still very early in the season though, and a 30 point swing right now will move you about 60 places on the table, so it's not time to panic and use your wildcard, yet.

The highest score this week was 102 points, with the average at 42 points. As we go into the points analysis below, pay heed that there are only three forwards in the top 15 points-getters - with the number of midfielders and defenders scoring freely, forwards who score consistently are becoming more of a placeholder, so feel free to change your team formations to reflect that, especially if you have built a strong midfield and back four. 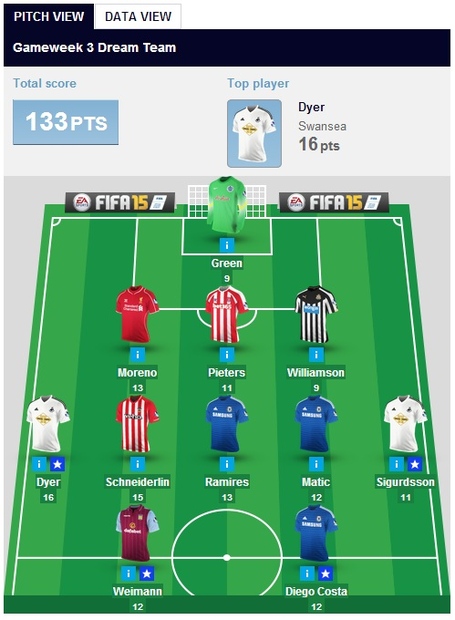 If last week's defensive performance by Everton against Arsenal dismayed you, you would have been doubly horrified by the capitulation to Chelsea this weekend, that too at Goodison Park. Roberto Martinez's failure to bolster the defensive corps has been puzzling to say the least, but with the international break upon us we are currently in the "I hope you know what you're doing" phase.

Goalie Allan McGregor stayed on top of the goalies' list, despite a one-point performance. Hugo Lloris also had a rough outing as Tottenham Hotspur did their customary bottling against Liverpool. Swansea City's Lukasz Fabianski has joined the top three, reflecting the Welsh side's rise to the top of the table. Tim Howard at this point should not be owned while Martinez works out how to plug the gaping cracks in the Blues' backline.

Among defenders, new boy Eric Dier fell off slightly after gathering just the one point over the weekend. Branislav Ivanovic continued his fine goalscoring form, and at this point is a must-own for everyone. He comes in at £7.2m, but with 29 pts so far, his consistency is well-worth the 4pts/£m. Ryan Shawcross, Nathaniel Clyne and Ashley Williams round out the top five.

Gylfi Sigurdsson had another excellent outing and is leading Swansea's charge this season. He tops the midfielders category with 29 points, with teammate Nathan Dyer just behind at 27. Both are value pick-ups at £6.5m and £5.6m respectively. Big money buys Raheem Sterling, Aaron Ramsey and Cesc Fabregas follow, all in the £9m range though. A name to keep an eye on is Morgan Schneiderlin at £5.5m- with the transfer window now closed, he is the main man in the Southampton midfield and contrary to previous speculations, the Saints are not folding like a crepe and have actually been playing well.

As already mentioned, Steven Naismith and Diego Costa are on top of the forwards' ranks, though the former comes in at exactly half the latter's cost. Another name we mentioned last week Andrea Weimann continued finding the back of the net too, and he's in at third just a couple of points behind. The proven and consistent players have not been proving themselves consistently, so it's really hit or miss at this point. A couple of top strikers have been added to the Premier League in the transfer window - Radamel Falcao is at £11.0m while Mario Balotelli is at £10.0m - both should be considered better buys than Robin van Persie at £12.6m and no goals to his name. Alvaro Negredo and Fernando Torres have left the Premier League and need to be dropped immediately. Olivier Giroud is out until January and should be dropped by the 6% still holding on to him as well.

Finally, this week 266,471 people used their wildcards - 9.1% of all fantasy football players. Once again, use caution with your wildcards, as you get one free transfer a week, and each additional transfer costs 4 points. Don't lose the plot this soon into the season! As always, let's hear your comments below, as well as any questions you might have or suggestions for what kind of information you would like to see here on the fantasy football column.