Week 6 is upon us, we look at the best players from last week.

Welcome to the latest edition of the Royal Blue Mersey Fantasy Football League update (#RBMFFL). Last week was a tough week for scoring points, and there has been some upheaval on the leader board.

It's still pretty tight, and there's a long way to go to the end of the season, so hang in there and make all the right choices! Click here to check your position if you're not in the top 10.

The top score of the week was below 100 pts, 98 to be precise, with the average a meager 36 pts. 165,310 people played their first wildcard - if you've already played yours then don't panic. A couple of changes here and there every week will get your team back on track. Remember, aside from the first free transfer every week, every subsequent transfer costs 4 pts, which is usually worth it in the bigger scheme of things. 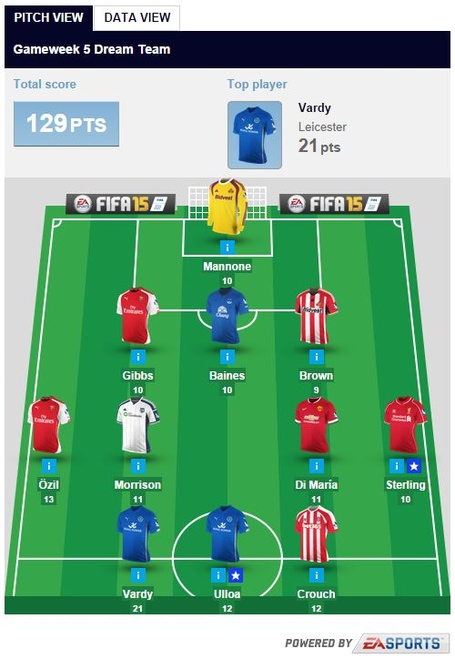 Newly-promoted Burnley have their goalie Tom Heaton in front of the goalies' pack - with there being no surfeit of goals this Premier League season, it's the goalkeepers who have been the most affected. Southampton, Aston Villa, and Stoke City have conceded very few goals so far, thanks to some soft schedules. With most decent goalies being in the £4.5-5.5m range, the best bet remains looking at the team schedules and picking out whoever has the most favorable upcoming schedule, which also means avoiding free-scoring teams like Chelsea, Everton and Arsenal, and to some extent Manchester City.

The Saint's Fraser Forster has a pretty kind schedule all the way to the end of the November, while Swansea's Lukasz Fabianski has some nice matchups for the next few weeks. Heaton, Brad Guzan and Julian Speroni will be dropping in the next few weeks, so keep an eye on them if they're on your squad.

The same three teams mentioned above have defenders high on the list thanks to the clean sheet bonus points. Look for players on those teams who have been scoring points via goals and assists for some great value. Nathaniel Clyne, Ryan Bertrand and Jose Fonte (Southampton), Michael Duff, Jason Shackell, Kieran Trippier and Ben Mee (Burnley) are all excellent value, and all come in the £4.5-5.5m range.

Among the more renowned and consistent defenders, Branislav Ivanovic and Leighton Baines are in the leading pack but their services do not come cheap - both tend to get the goals and assists often though, and are worth the cost.

Midfield is an area you can bolster your team, but you will have to be prepared to shell out the big bucks too. Raheem Sterling, Cesc Fabregas and Aaron Ramsey all cost a packet, but their respective teams' successes start and end with them, and are worth their prices. Gylfi Sigurdsson and Nathan Dyer are a big part of Swansea's good form, but have been quiet the last two weeks. Morgan Schneiderlin has been pulling the strings in the Southampton midfield, and is a worthy pickup too.

Angel Di Maria has already gotten very comfortable in the Manchester United team, and despite being £9.8m, should be on your team. If that is too rich for your taste, Ander Herrera is also a key cog in that middle, and is £7.3m. Some cheaper options to fill out the midfield include Crystal Palace's Jason Puncheon and Stoke's Victor Moses. Stewart Downing and Mark Noble are both important for West Ham United, and come in pretty cheap too. Finally, here's a hot tip - Nemanja Matić has played every minute of every game for Chelsea, and is only £5.5m. He's not a big points-getter, but will continue to rack up the bonuses from playing for the London side.

This has been the year of the unheralded striker so far. Forget overpriced Wayne Rooney, Robin van Persie, Sergio Agüero, Daniel Sturridge, Mario Balotelli and Radamel Falcao. Aside from the unstoppable Diego Costa, no striker over £8m is worth having when forwards Leonardo Ulloa (£5.8m) and Graziano Pellè (£7.7m) are available and potting the goals at free will. Save your money for now and when the big names go on hot streaks, pick them up then.

Good luck, and see you here again next week!