Going into Week 5, we look at the best players from last week.

The RBM Fantasy Football League is going along fine, with the top 5 bunched together pretty tight, still all to play for though. There's only 50-odd points separating the top fifty positions, click here to check your position.

Click on the link for the Fantasy Football hub with a listing of all the articles so far.

The top score of the week was 116 pts, with a higher average of 52 points - once again, there was no shortage of goals this past weekend. 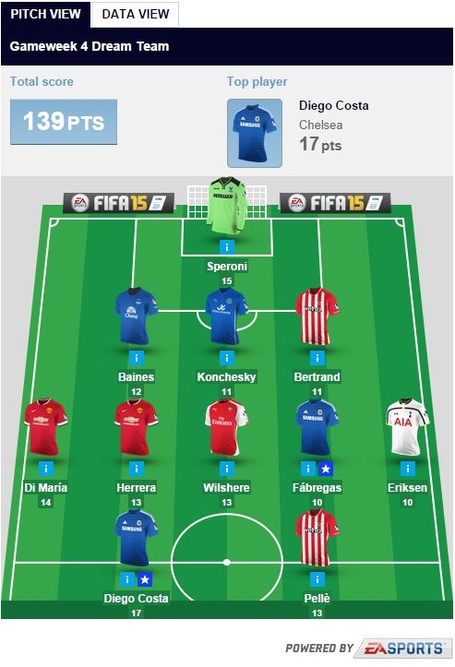 Among the goalies, Brad Guzan has taken over at the top on the back of Aston Villa's excellent performances which have taken them up to second in the table. With Arsenal, Chelsea, Manchester City and Everton in his near future though, it might be best to keep him off your squad and stick with a goalie like Fraser Forster or Lukasz Fabianski who have kinder schedules coming up.

Leaders among the defenders Branislav Ivanovic and Eric Dier both had lower-scoring games, and one wonders if the bubble has burst for them. Nathaniel Clyne has been scoring consistently and at just £5.2m, might be a sneaky good buy. One-time leader James Chester needs to be dropped at this point as even after his return from suspension he has failed to crack Hull City's starting lineup. Keep an eye on Burnley's Kieran Trippier - the Clarets have had two straight clean sheets and Trippier is a good crosser of the ball from the right touchline, which got him 12 assists in the in Championship last season.

The top five midfielders remain mostly unchanged - Gylfi Sigurdsson, Cesc Fabregas, Nathan Dyer, Morgan Schneiderlin and Aaron Ramsey. Manchester United looked good against a woeful QPR side, with all their midfielders netting - Angel di Maria, Ander Herrera and Juan Mata. Wait another couple of weeks before pulling the trigger, though di Maria has looked right at home in the Premier League so far.

Nacer Chadli and Kevin Mirallas have both been in sparkling form lately, and should be on your side as both Tottenham and Everton have easier fixtures coming up. Among lower priced midfielders, Stewart Downing and George Boyd are playing plenty of minutes and should get you some additional bonuses there.

Diego Costa is far and away the most reliable striker out there, with an astonishing seven goals in four games, from thirteen shots all in the box. Despite that £10.8m pricetag, he needs to be owned as he continues his rich vein of form. Next are a trio of cut-price strikers all at £5.6m - Steven Naismith, Leonardo Ulloa and Andreas Weimann. All three have been among the goals and are worthy of a spot on your roster. Graziano Pelle at £7.6m is also worthy of a look for the amount of chances he has been getting for Southampton. Connor Wickham has been lining up as a lone striker and is also worth picking up at just £5.9m. Finally, Emmanuel Adebayor is one of the strikers who is slowly making a march up the table and is at £8.6m, as has Wayne Rooney at £10.4m.

More and more people are hitting the reset button, with 374, 471 people using their first wild card this past week. If you are barely scraping together the average points per week, this might be the time for you to build a new squad from scratch. As always, feel free to ask your questions in the comments below.