Season's already two games in and we can start seeing some trends here.

Lots of fantasy football players in the Royal Blue Mersey Fantasy Football League have loaded up on Everton players, and unless you have Steven Naismith in your squad, it's not been a happy time so far. Here's the link to last week's article.

There has been a change on the leaderboard, but it's still pretty tight at the top.

The highest score in the system for the week was 99 points, with the average at 44 points. This week's dream team had some carryovers from last week. 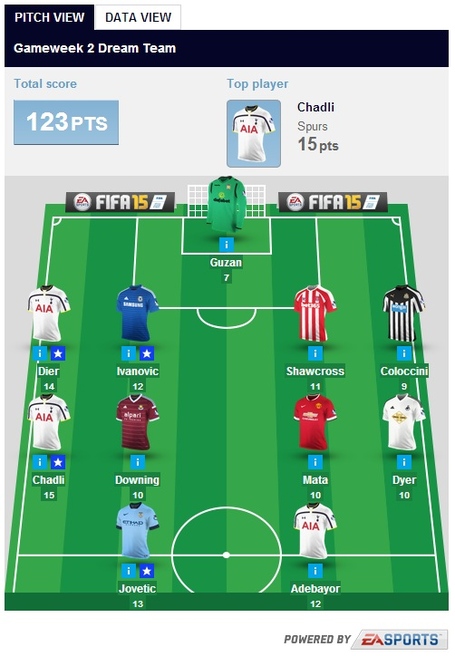 Everton once again gave up the lead and shipped two goals, which does not bode well for Tim Howard and the rest of the defence. Seamus Coleman at least redeemed himself with a goal. Manchester United also showed that it might be a while before they are a contending force. Meanwhile Tottenham Hotspur were at their marauding best and defender Eric Dier might be to fantasy what Coleman was last season. Keep tabs on that lad.

There is very little variation in goalie prices, from £4.0 to £6.0m, so you have quite the selection of shotstoppers to work with. The top 3 has only one 'big' name in Hugo Lloris, while the American fans will tout the merits of Brad Guzan, it's Allan McGregor who leads with 16 points after two games. Hull don't face a big game until Manchester City in week 6, so the Scotsman should continue his impressive run. Lloris has Liverpool, Arsenal and City upcoming, so picking him up might not be the best bet, while Guzan plays Liverpool, Arsenal, Chelsea, City and Everton in successive weeks after next Saturday, which will bring him down a peg or two. Swansea City goalie Lukasz Fabianski has Chelsea in Week 4, and then a pretty easy run until Week 10, and might be a good pickup.

Among defenders, we've already mentioned Dier. Another fullback who had a good outing was Branislav Ivanovic who had an assist and a clean sheet to complete a good couple of weeks. Dier has 29 points with Ivanovic at 22. Danny Rose, Ron Vlaar and Nathaniel Clyne round out the top five. Last week's star James Chester got himself sent off and is suspended for the next game. Another familiar name Ryan Shawcross had a good game with 11 points and is worth a look. Alan Hutton of Aston Villa has been consistent after two weeks and is an interesting purchase at only £4.1m.

Aaron Ramsey's goal started the comeback for Arsenal, and got him to the top of the midfielders' charts. He leads with 19 points, but comes with the hefty pricetag of £9.1m. Nacer Chadli was the player of the week with 15 points, but didn't play at all in the first week and is a risky pickup. Juan Mata did hit double figures this weekend and should be a key figure in Louis van Gaal's side, but also is not cheap at £8.9m. If value is what you're looking for, Stuart Downing of West Ham United (and formerly another club that we don't need to mention) scored 10 points this week for only £5.5m, but there is no guarantee of consistency there.

Your best value bet in the middle of the park remains Gylfi Sigurdsson as he is a key cog in the Swans picture. Sebastian Larson is also in the top three midfielders, but has shown himself to be pretty inconsistent in the past. Eden Hazard and Samir Nasri are still getting into the pace of things, so if you do have them then patience should be the virtue you need to channel.

In the forward ranks, it's good old graft that looks to be paying off with Steven Naismith leading the pack. At just £5.1m, his 18 points is an excellent buy. Stevan Jovetic had a starring role yesterday bagging a brace, but will return to the bench once Sergio Aguero is fully fit. The Argentinian striker is getting there, plundering a goal within seconds of coming on as a sub yesterday too. Diego Costa got another goal too this weekend - Costa and Aguero are the kind of players that will get you points as long as they are fit enough to play, but both command high, high prices as well, over £10.0m for their consistency.

Saido Berahino and Leonardo Ulloa did not score this weekend, but are the centerpieces of their teams' attack and should get plenty of playing time and opportunities. Add to that list Marouane Chamakh and Nikica Jelavic who lead the lines at their teams at well, and can pop up with goals ever so often.

A closing stat to leave you with - 152,604 fans used their wildcards this week. That is, 5.2% of all the people playing fantasy used their wildcard and cleared out their squads and started anew. In Week 2. Of a 38-week season. Use your better judgement, make a couple of changes at a time!

Let's hear your comments below, as well as any questions you might have or suggestions for what kind of information you would like to see here on the fantasy football column.