The first game is in the bag, and we look back at the top performers.

First of all a big thank you to all those who signed up to play in the Royal Blue Mersey Fantasy Football League. We have over two hundred people participating and we're looking forward to a season of banter and hopefully lots of success for Everton!

After the end of this weekend's fixtures where we saw some established names continuing their form from last season, here are the league leaders -

The highest scoring team throughout the system was 101 points, with the average at 47 points, which was slightly higher than the norm last season. There are 2,934,464 fans playing on the Premier League platform, so there is quite a bit of competition to show that your footy knowledge belongs in the upper echelons.

Here is the Dream Team from Gameweek 1 - 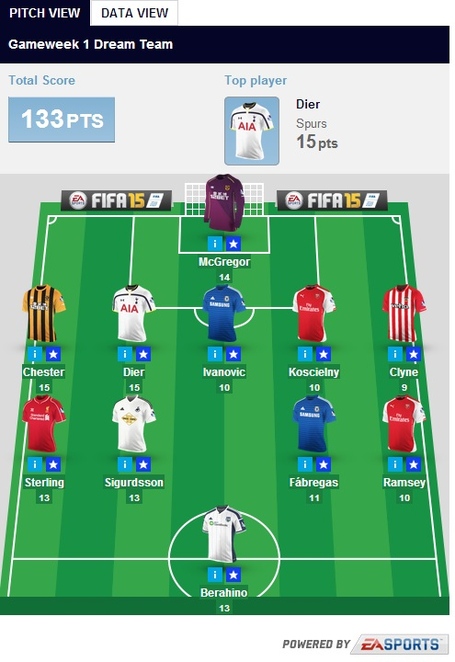 Which brings us to the next section - whose stock is rising and who you need to discard before this coming weekend. Manchester United were underwhelming and those hoping for a quick turnaround in the Red Devils fortunes under Louis van Gaal might be in for a longer wait then they expected. Chelsea looked dominant though they were playing against Burnley FC, and provided some excellent players for the value.

Hull City's clean sheet boosted their defence and goalie's scores, and they have a pretty favorable schedule in the next few weeks, so it might be worthwhile keeping them on the roster - GK Allan McGregor and defender James Chester are both budget picks providing excellent value. Tottenham defender Eric Dier also looked very good and capable of scoring - worthy of the low money he's going for. Ron Vlaar had a starring performance in the World Cup, and kept up his good form over the weekend - he's going for a low £4.5m thanks to what is expected to be a rough season for Aston Villa. Everyone expected Southampton to be terrible after Liverpool raided their ranks like hyenas picking through bones in the savannah, but Nathaniel Clyne showed there might still be hope for the Saints - he's going for a decent £5.0m.

Gylfi Sigurdsson's return to Swansea City wasn't the stuff headlines are made of, but his goal to sink United at Old Trafford certainly was. The Iceland international merits a look at a relatively cheap £6.1m for a scoring midfielder. Not too many other midfielders covered themselves in glory, but expected stars like Raheem Sterling, Aaron Ramsey and Cesc Fabregas did not disappoint either.

Among forwards who showed excellent value this weekend were West Bromwich Albion's Said Berahino who scored a brace, Everton's Steven Naismith and Villa's Andreas Weimann who also found the back of the net. All three are available for less than £5.5m and figure to get plenty of playing time. The usual suspects who you thought would score did - Wayne Rooney, Diego Costa, Daniel Sturridge, Sergio Aguero and Edin Dzeko. Another name worthy of a look from his performances is newly-promoted Leicester City's Leonardo Ulloa, still available for only £5.5m.

Remember, you have only one free transfer for the week, so use it wisely. Also, feel free to cut Ross Barkley loose for the next few weeks at least. If you do feel the need to use more than one transfer, it will cost you four points from the upcoming week. And please do not go hog-wild and use one of your Wildcards to change out the whole team - still way too early for that kind of overreaction!

Let's hear your comments below, as well as any suggestions for what kind of information you would like to see here on the fantasy football column.