Share All sharing options for: Everton's Draw In Advanced Statistics

Everton's draw on Saturday was a classic Everton gut punch. Get the lead, hold it, look underwhelming, and concede late. But there has been a lot of arguing about just how good Everton really was, especially in the second half. While some were content with Everton's lackadaisical approach, others had an issue with it. The real question is what do the underlying stats say, and they aren't kind to Everton. One of the things to note here is that because of the low sample size, we might get a few numbers and percentages that look like outliers. 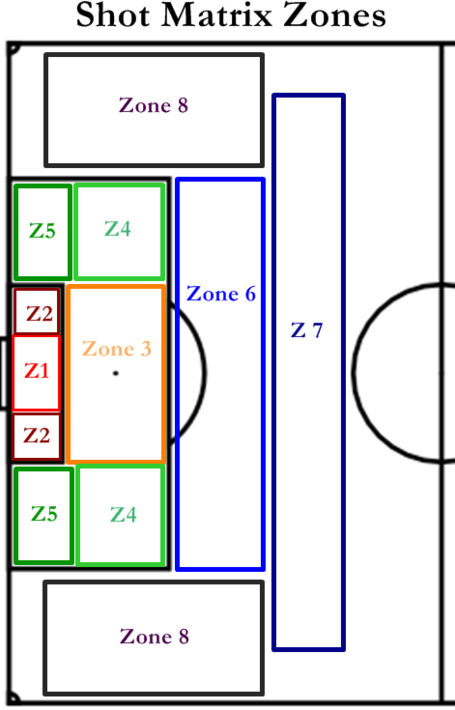 Before we look at Everton's numbers I want to establish a baseline. The graph below charts the number of shots and their results for each of the 8 shooting zones, the image above shows them thanks to the fine folks over at Cartilage Free Captain. This data comes from summing up all 10 EPL matches from the weekend. As we go we'll add to these totals to create a much more stable baseline to compare Everton's stats to.

The target rate column is the percentage of shots in the zone that were shots on goal. unsurprisingly zone 1 puts an astounding amount of shots on target, and  converts a large number of them into goals. This is where we can put that cliche about having to try to miss when you are that close to goal.

But the important question is what Everton's numbers look like compared to this, below are the numbers from the weekend.

Any of the fields with N/A just means that Everton hasn't had any shots in that zone yet. What is unfortunate for Everton though is that the zones where we do have data, especially zone 3, the target rate is low. Granted the only shot Everton put on target from zone 3 was a goal, but I'm fairly confident in saying that won't continue.

Next week we'll revisit the shooting statistics as well as introduce some of the corner kick and free kick data. While Evertonians weren't happy about set piece defending this week the entire EPL as a whole was a bit off statistically. We'll see what happens after week two.