It was a mixed bag as Everton kicked off their pre-season campaign with several individual players impressing, but some defensive wobbles and an injury sustained by Seamus Coleman are cause for at least mild concern.

There were definitely moments in Everton's first pre-season friendly in which it was clear that the players were seeing their first game action in a couple of months, as the Toffees drew 2-2 with League Two neighbors Tranmere Rovers. The biggest concern to emerge from the match was Seamus Coleman leaving midway through the second half with an injury, possibly a hamstring problem of some kind. The good news is that it didn't look terribly serious, and with this being the pre-season there was of course no reason to risk further injury by allowing Coleman to continue. Hopefully the substitution was merely precautionary in nature, but we'll keep you posted.

Steven Naismith fired Everton into the lead in the first half with a brave lunge at Luke Garbutt's excellent cross, but the rest of the game was blighted by defensive mistakes that led to two Tranmere tallies by Cole Stockton and James Rowe, the former made possible by a horrendously mis-hit back pass by John Stones. Leon Osman did manage to briefly put the Toffees back into the lead with a cool finish off a badly defended corner kick, but Rowe's goal with Antolin Alcaraz out of position and Stones hesitant to cover confirmed that the game would end with the honors even.

- Garbutt had a terrific game from the left back position. Both he and Tyias Browning played the roles of Leighton Baines and Seamus Coleman respectively to a tee, getting forward with frequency and attacking from the wings. In Roberto Martinez's preferred 4-2-3-1 formation, the full backs need to have the endurance and the ability to be able to put in a cross on one end of the pitch and then defend in the six-yard box seconds later. Garbutt certainly looked up to the task today, setting up Naismith for the first goal with a beautiful cross and clearing several dangerous situations on the defensive side. Garbutt could see plenty of playing time with the first team as Bryan Oviedo works his way back to full fitness, so it's comforting to see him play so well. Left back is one position that shouldn't be an issue this year.

- Also, is it just me or does Garbutt look exactly like Washington Nationals outfielder Bryce Harper? 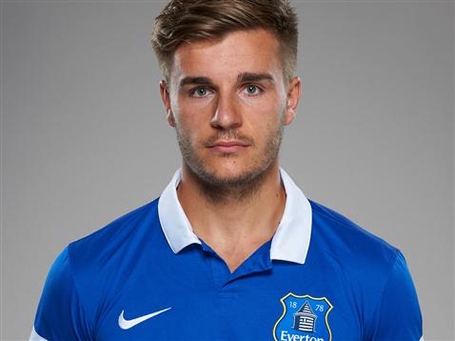 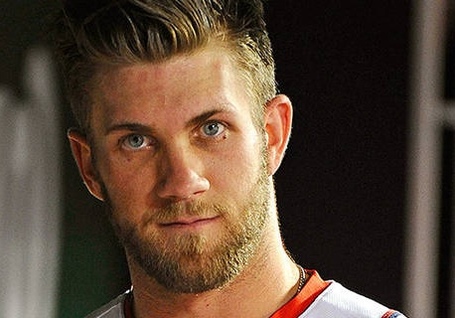 - Some of the other young players also had solid showings. In addition to the aforementioned Browning, Conor McAleny and John Lundstram put in a good shift. Though McAleny didn't score he always looked a threat around the Tranmere goal, and while Lundstram misplaced a few passes on occasion, the good outweighed the bad and he nearly scored on a spectacular volley. Shane Duffy was decent, but Matthew Kennedy, Chris Long, and Hallam Hope were all a bit anonymous.

- I also thought Aiden McGeady had a really good 45 minutes. His ball control, service, and combination play were all excellent. While he was fine after arriving at the club in January, it would be quite nice to see him really assert himself and take the next step this year.

- Sticking with the positives, how awesome was it to see Darron Gibson back on the pitch in an Everton shirt? His performance won't have blown anyone away by any means, but he looked to be back to his usual quietly efficient self. I love how Gibson keeps the play moving - the ball is never on his feet for very long, and he's always looking to advance the movement forward. That should fit in perfectly with the Martinez style.

- Now for the not so good stuff. It doesn't take a brilliant tactician to analyze what went wrong on the first goal allowed - Stones simply made a terrible attempt to hit a long clearance from the opposing goalkeeper back to his own netminder, and the result was a one-on-one situation with Joel Robles for Stockton. I thought Stones actually looked pretty good before the mistake, so let's chalk that one up as a fluke. He could have possibly done more after Alcaraz was caught upfield in the lead-up to the second goal.

- The other two players who looked shaky to me were Antolin Alcaraz and Robles himself. Neither really did a lot for me last year, and their performances today didn't do much to change my opinion. They both just look unsure of themselves a lot of the time and a calamitous mistake always seems right around the corner, and that just seems to unsettle the rest of the defense. Robles will probably see a lot of action in the cups and Alcaraz will undoubtedly be called upon to play substantial minutes at some point, so some improvement from them would be nice to see. Hopefully Alacaraz will get better as he moves further away from the injuries he sustained last year.