RBM - Everton Player of the Year (Round One)

Here's your chance to pick who you thought made the biggest difference to the side.

Share All sharing options for: RBM - Everton Player of the Year (Round One)

With the end of the 2013-14 season upon us, it's time to start handing out some Everton awards. The most prestigious of those of course is the Player of the Year honour, and this is sure to be a contentious one because so many players have stepped up and given excellent performances numerous times during the season.

To make things more fair, we here at Royal Blue Mersey have picked the top eight players we thought that were integral to the team's performances this season, and personified the Everton spirit best. We paired off these players in a Wimbledon style seeding off our votes and you will get to choose from these pairs, until we reach who should be our consensus Player of the Year.

So here we go, here's the top 8 players: 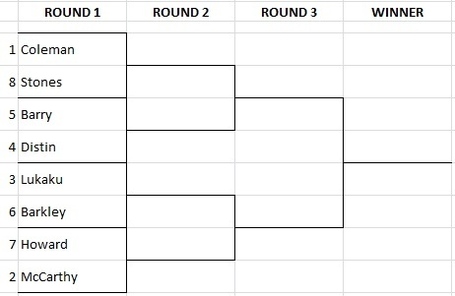 Vote in each of the matchups presented, and the winner will move on to the next round. The polls will only be open for a few days, so don't forget to vote and spread the word as well!