Roberto Martinez recently claimed he could convert Baines into a midfield general. We take a deeper look.

Share All sharing options for: Leighton Baines and Philipp Lahm: An Analysis

When Manchester United took on Bayern Munich last week at Old Trafford, among the crowd were Roberto Martinez and Leighton Baines. You would have thought the Everton duo were on a scouting mission, though the object of their attentions was not someone obvious. They were in fact there to take a look at the playing style of Philipp Lahm. The defender-turned-midfielder has been rejuvenated this season after Bayern manager Pep Guardiola moved him to the middle of the park and Martinez is eyeing a similar role change for the England left back as well.

The physical similarities between the two players are striking, with both measuring up at 170cm in height and Baines a few kilograms heavier. However, there is more to them than meets the eye. Both players are accomplished fullbacks, adept at beating their man and getting crosses in. The two easily fit into the wingback role when required, but are getting into the middle phases of their careers where searing pace is not their forte anymore.

Lahm is 30, and has been a fixture in Bayern's starting lineup since 2002. A right-footed player, he is equally comfortable playing on either wing and is widely considered as one of the best fullbacks to have played the game. The 'Magic Dwarf' has picked up several personal accolades over the years, including getting named to the World Cup Team of the Tournament (2006, 2010), Euro Team of the Tournament (2008, 2012) and in the UEFA Team of the Year (2006, 2008, 2012 and 2013). He is presently the captain of the all-conquering Bayern Munich side as well as the German national team, with 105 caps.

Baines needs little introduction to Everton fans. The 29-year old first broke into the Second Division ranks with Wigan Athletic in 2002-03, and since then steadily climbed the ladder before switching to Everton in 2007. He has always played at leftback and possesses unerring accuracy in his magical left foot, consistently finding the goal with his freekicks and penalties. In fact, Baines remains the only player in Premier League history to have taken over ten penalties and not missed a single one. The Kirkby-born defender has been on the Premier League Team of the Year twice, and twice Everton Player of the Year as well. He has been capped 22 times by England, having struggled to displace Ashley Cole from the national side.

Bayern under Pep Guardiola play a primarily 4-3-3 formation, but that has often morphed into a 4-2-3-1 setup, depending on how the game is going. Toni Kroos can fall back deep to play alongside Lahm as two holding midfielders, who are then better able to dictate play while protecting the sometimes fallible back four. A key characteristic of Lahm is his versatility. When at rightback, he was able to take advantage of Arjen Robben and Thomas Muller's tendencies to cut inside from the right wing to get deep and play in defence-splitting passes. He has taken that ability under Guardiola's prompting this season to become a midfield general, mopping up in defence and playing the short passes forward that Bayern use to probe their opponents before slicing them apart with the killer through ball.

"Like Lahm, Leighton doesn't give the ball away, he's got a very low centre of gravity and technically he is as good as it gets. When you have that control of the ball and have been such a good defender, and as a left-back you have to be very good on one-v-one situations, it is very important to have that defensive mindset in those midfield areas. That is important for defensive balance.

As a player Leighton has been through so many different experiences and has always found a way to rise to new challenges in his career. I am convinced he can step up to a new challenge. You need to look at the physicality and he is a naturally fit boy so can easily go into the role. He can be more expansive in central midfield than in his left back role. That's why I wanted him to see it first hand."

Martinez has shown this season that he is perfectly capable of playing to the strengths of the squad he has been given, without paying too much attention to their opponents. Under him, youngsters like Ross Barkley and John Stones have flourished. The Blues manager however, has also shown his tactical nous by jumping on opponents' weaknesses to create an advantage, as experienced in a most unforgettable manner by Nacho Monreal and the Arsenal side. Similar to his fellow Spanish counterpart Guardiola, he also switches easily between 4-2-3-1 and 4-3-3 as needed.

Everton's first taste of the current midfield 'general' came with Darron Gibson in 2011-12. Since then though, Gibson has been in and out of the squad with injuries. When Martinez came to Goodison this season, he employed Gareth Barry and James McCarthy to great effect in shielding the back four. McCarthy has been tigerish in that position, consistently getting in front of players and blocking shots. Barry on the other hand has complemented him perfectly by collecting the ball and distributing it to great effect to all parts of the pitch.

Barry is at Everton on loan from Manchester City and while he is out of contract at the end of the season, his high wage bill might be a stumbling block in ensuring his stay at the Blues. Barry is also 33 and could be entering the closing stages of his career. Gibson is no certainty to be an all-season player with his chequered injury history. By getting the word to Baines that he is looking at switching him to a midfield role in the future, Martinez is laying the foundation for what his future teams could look like. The emergence of Bryan Oviedo as a solid leftback has certainly factored into his thought-process as well.

Depending on whether Barry and/or Gibson are still around next season, Baines could easily slot into the left-sided slot in a 4-2-3-1, or the central role in a 4-3-3 formation. McCarthy won't be going anywhere and should have the right side locked down. This leaves an opening in the middle '3' of the 4-3-3, which could rotate between Barry, Gibson and even Osman who has played there. In the regular 4-2-3-1, the left winger is a predominantly attacking role and if Gerard Deulofeu doesn't return on another loan stint, Martinez could be looking for a full time left-sided winger if he is not comfortable with Aiden McGeady in that position. 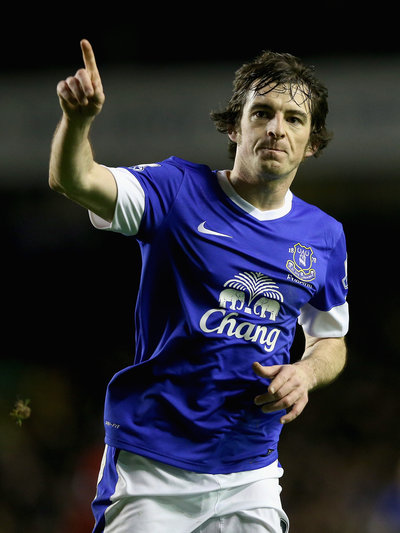 Often dubbed the 'Fifth Beatle' for his mop-headed hairstyle, Baines has fought through a deep-seated shyness to emerge as a successful fullback. This fear of failure has provided him with the searing motivation to do well over the years. In the lead-up to the 2010 World Cup when he was almost a certainty to be in the England squad to South Africa, he mentioned that he would have a hard time being away from home for nearly two months and caught a lot of flak for his forthright comments. Whether this played an eventual role in Fabio Capello's squad selection or not, Baines was left home for the trip. As oft-quoted since, Baines was on his way to buy a trampoline for his son when he received that call from Capello, the leftback was undaunted by the setback and bounced back to force his way into the England set-up again.

It is this resilience that Martinez will be hoping that Baines can tap into again when he moves him over into midfield. The skills are all already there - Baines possesses excellent close control, shows fantastic vision when playing the ball into space and is not afraid to mix it up when required, which Mikel Arteta can bear witness to. He has shown both power and guile when taking setpieces and could translate that ability to dictate play from the middle of the park. There's little doubt that he can have more of an impact centrally where he'll have more leeway than currently where he is limited by the left touchline, as long as he is protected by a ferocious tackler like McCarthy.

Toffees all over will be waiting with bated breath to see the next reincarnation of Leighton Baines in the Everton squad.