While the footballing world was taking in yet another lamentable Manchester United performance against Liverpool on Sunday, Kevin Sheedy puts the boot in on David Moyes.

Sheedy knows Moyes and his methods well as he worked alongside the Scot in his position as Everton Under-18s coach since 2006.

But in a series on Tweets on Sunday evening he was less than complimentary about Moyes, starting with his tactics.

Punt the ball up to Fellaini. Great viewing.

This was at 10pm on Sunday, presumably watching highlights of United's thrashing at the hands of Liverpool on Match of the Day 2.

Twitter user Gary Guyers then responded to Sheedy and his response was telling:

@garyefc1982 Correct on both counts Gary.

As Under-18s coach Sheedy must have been frustrated that the efforts of his players were apparently being ignored by the manager, as he later confirmed:

@davidjbricey yep David he did.

@GeorgeRobboEFC George chill. We now have a Manager who wants to win games. COYB.

Then, at just after midnight, Sheedy posted another tweet, later deleted but already transmitted to his 8,000 plus followers. 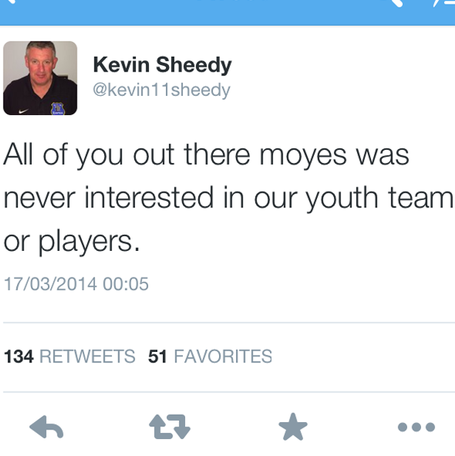 It was an extraordinary rant from a man not normally associated with such outbursts. He is relatively new to Twitter though so it may well be he did not quite appreciate the impact of his comments. I've no doubt the club has had a quiet word with Sheedy today and reminded him of about the pitfalls of social media.

That said, his comments certainly do fit in with rumours surrounding Moyes' tactics and apparent mis-trust of young players while in charge of the club. Everton make a big show of their youth facilities (and rightly so) so I can understand Sheedy's frustrations if Moyes did indeed 'ignore' young players.

I'm sure Moyes would counter that argument by pointing out the fact he gave debuts to the likes of Wayne Rooney, Ross Barkley, Jose Baxter & James Vaughan when they were just 16.

He is also a easy target at the moment given his struggles at United and you wonder what happened to the relationship between the two men that caused Sheedy to turn on his former boss so publicly.

Still, given Moyes is no longer in charge Sheedy's grievances are no longer relevant as Roberto Martinez appears more than willing to give Everton's youth its chance.