Should Everton Experiment with a Tactical Change?

After a disappointing January and a sluggish start to February, the Toffees sit in 6th place, looking up at spots it looked they could certainly claim earlier in the season. Should they change things up in an attempt to get there?

Share All sharing options for: Should Everton Experiment with a Tactical Change?

Let me make one thing clear: the sky is not falling, nor am I suggesting that it is. The boys in blue are through to the last 8 of the FA cup, still very much alive in the Champions and Europa League races, and have been able to grind out two tough results in the face of injury in the last two weeks.

But, that being said, this just hasn't been the team that we saw through much of the first half of the season, as Calvin rightly pointed out in the match report from the Swansea match. Confidence has seemed a little short, and though the possession has been there, often the chances have not been, the defenders have been prone to brief mental lapses which have often led to goals, and the team just looks flat at times.

Which leads us to the question I have posed; should Roberto Martinez consider changing the formation? The 4-2-3-1 has served the Toffees well for much of the season, but they seem to have hit a bit of a wall in using it.

The holding midfielders, James McCarthy and Gareth Barry, have looked a step off the pace in the past two matches, and have been struggling to get the ball where it needs to be to create chances (though their defensive work, as always, has continued to be solid).

The 3 attacking midfielders have been a wave of inconsistency as well. I've been harping on it for much of the season, but the contributions of Steven Pienaar, Kevin Mirallas, Ross Barkley, and Leon Osman have been far too inconsistent, and often left the strikers without service. The jury is still out on Aiden McGeady, given the brevity of his time with the club thus far, and Gerard Deulofeu's injury and subsequent return have left Evertonians not entirely sure what can be expected of him.

Perhaps it's fatigue, perhaps other clubs have figured out how to play against the "new-look" Everton, perhaps the boys are just mired in a run of poor form. Whatever the cause, the effects have been clear, and if the Toffees want to jump back into the top 4 race, things have to get turned around quickly.

There is good news for Everton though; March is almost certainly their easiest month in terms of Premier League competition. They host West Ham, Cardiff, Swansea, and go to Fulham, all matches that are quite winnable on paper.

Everton supporters will certainly have not forgotten January's draws at Stoke City and West Brom though, also winnable matches on paper.

So perhaps Roberto Martinez ought to take those matches as opportunities to see how his side would perform if deployed in a different formation. Let's take a look at what other options might be. 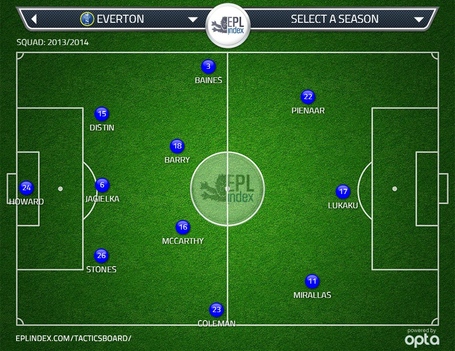 This is perhaps the most obvious choice, given that Martinez toyed with it extensively in preseason, and has used it at the end of matches during the season.

This formation allows Leighton Baines and Seamus Coleman to get more involved in the attack, which is a huge plus. Inversely, on defense, their presence on the wings gives the team essentially 5 defenders, provided they are given time to get set. The wingers also get pushed farther up the pitch, which would hopefully help provide more service for Lukaku or any other striker.

There just doesn't appear to be a place for Ross Barkley here, which may very well be on of the top reasons Martinez went away from this formation when the season started. With Johnny Heitinga now gone, depth at center-back is a little thin, even assuming that Antolin Alcaraz is healthy. Playing a dominant possession game may be difficult with so few players in the center of the pitch. Is John Stones ready to be a full-time starter? Transition defense may suffer if teams can counterattack before Baines and Coleman can get back into the play. 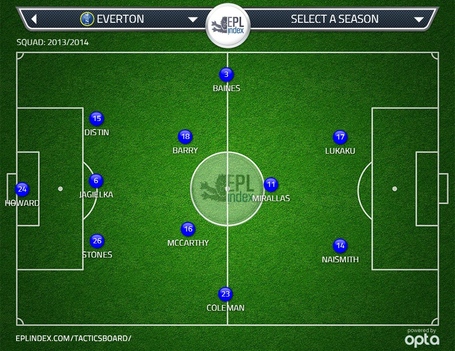 (Note: Naismith or Traore could be the second striker. Nobody yell at me for putting Naismith in a starting 11.)

The striker, whoever it has been, has often seemed isolated, and Lukaku, Traore, and Naismith could all likely benefit from having a strike partner. Kevin Mirallas would be allowed to play centrally, as he has said he prefers. Again, Baines and Coleman can get more involved in the attack, as well as provide 5 defenders in the defensive third. A central midfield trio of Barry, McCarthy, and Mirallas could be solid in possessing.

Again, where does Ross Barkley fit? (Or where does Mirallas fit if Barkley is your top choice to play behind the strikers.) Pienaar, McGeady, and Deulofeu are all stuck on the outside looking in. Again, is John Stones ready for this kind of role? 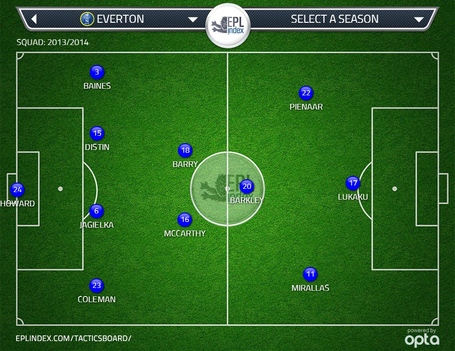 The 4-3-3 allows the wingers to think more offensively, without the potential defensive setbacks of the 3-4-3. A front four of Lukaku, Mirallas, Pienaar, and Barkley has potential to be incredibly explosive. The advanced play of the wingers opens up lots of space for Coleman and Baines to run in to. The tight midfield three would hopefully allow for a good chunk of possession.

Ross Barkley is forced to take up a slightly more defensive position. Though possession would likely come easily to the midfield, turning it into chances could be tough with lots of space between attacking players. 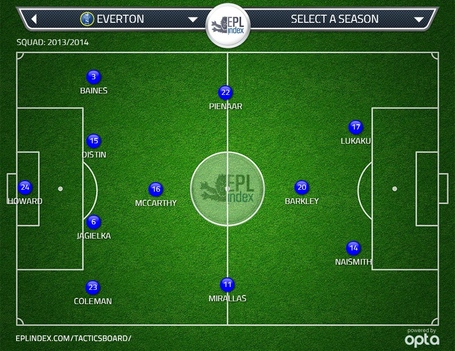 The diamond midfield allows Barkley to really get up just behind the strikers, and provide valuable link-up play. Hopefully having two strikers would ease the attacking burden on both. With the club's current bench players, there is depth at every position on the pitch in this formation.

Either Gareth Barry or James McCarthy would have to sit out. Either Mirallas plays out wide, or he gets pushed central and there is no room for Ross Barkley. There is only one holding midfielder to help cover for the attacking full-backs.

Do any of these formations appeal to you? Do you think Martinez would be better off not tinkering at all? Have your say in the poll and comments below!