Tough sledding last week. You know it's a bad day when Graham Dorrans, no less, is the top scorer in fantasy.

Week 6 was a hard week to make any moves up the leaderboard. The top three remains the same in the Royal Blue Mersey Fantasy Football League (#RBMFFL) from last week -

The average for the week was low again, only 38 pts though the highest was 93 pts. The Dream Team for the week was at 127 pts and 108,451 people used their first wildcards this week. At this point if your team is not consistently above the average and the one or two changes every week are not cutting it, then it's time to play your wildcard and clean house. 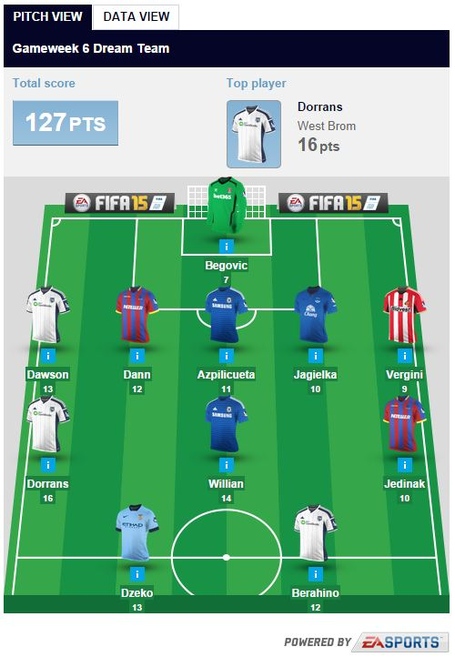 There's a new name atop the goalie charts, and it's not one you expect. Julian Speroni is the new leader, with a pair of ex-Arsenal keepers behind him in Lukasz Fabianski and Vito Mannone. Right now picking the best goalie of the bunch is akin to a crapshoot, on any given day just about any one of a dozen shotstoppers can jump to the top.

We'll pretty much repeat our advice from last week - Southampton's Fraser Forster has a pretty kind schedule all the way to the end of the November, while Fabianski has some nice matchups for the next few weeks. Tom Heaton, Brad Guzan and Julian Speroni will be dropping in the next few weeks, so keep an eye on them if they're on your squad.

Not much has changed among the defenders either. Southampton defenders Nathaniel Clyne, Ryan Bertrand and Jose Fonte are all worthwhile buys. Spurs' Eric Dier has hit a dry patch after all his early goals and can be safely dropped. Speaking of goals, Branislav Ivanovic and Leighton Baines should be on your radar as they are making their presences felt on their respective sides. Another Chelsea player Cesar Azpilicueta can be had for only £6.0m, which is pretty reasonable for a player who will get some assists and clean sheet bonuses for you consistently. Despite his blockbuster of a goal in the Merseyside Derby, wait and watch on Phil Jagielka to see if Everton sort out their defensive woes.

Chelsea midfielder Willian played his first full ninety minutes of the season, and netted himself 14 points. Coincidence? While he does play a key role in the London side's midfield, until he starts games you can lay off him, and the same can be said for Oscar. There are plenty of decent players out there who play consistent minutes and get points without you having to break the bank for them.

Like who? Fancy you should ask, because we have a name right here for you - Morgan Schneiderlin. He seems to have put his little Twitter outburst from the offseason behind him, has fully gotten behind the Ronald Koeman project, and has played every minute of every Saints game so far. At only £5.9m, he has to be in your squad going forward. Among the more expensive players, Cesc Fabregas is another name to keep tabs on. Tottenham's Nacer Chadli has found himself among the goals recently while ex-Spurs Gylfi Sigurdson is still pulling the strings for Swansea.

With Manchester United skipper Wayne Rooney facing a three-game suspension, Juan Mata comes back into the squad and Angel Di Maria will play a more prominent part in the midfield. Both are worth owning, but come with hefty pricetags, as do Steven Gerrard and Eden Hazard - spend your money elsewhere we say.

We have another name to add to the top five among the forwards - Saido Berahino of West Bromwich Albion. Any combination of Diego Costa, Leonardo Ulloa, Graziano Pelle, Sergio Aguero and the aforementioned Berahino will ensure you're raking in the goals. Among budget options for strikers you have Dusan Tadic, Dafra Sakho and Fraizer Campbell, all of whom can be had for under £6.0m.

Leave a comment here if you have any fantasy football questions, and we'll see you here next week!