Everton vs Juventus: The Fan's Dilemma

Share All sharing options for: Everton vs Juventus: The Fan's Dilemma

I'll preface this piece with an admission of 'Guilty as Charged' - there was no fan in the entire world as torn as I was when I heard Juventus were taking on Everton. I grew up an Everton fan in those heady days of the early 80's, and have lived through the dark years that followed before David 'Moses' Moyes led us to the light. But in between that there grew an admiration for a certain team in Italy that played a version of the beautiful game I dreamed the Blues would play. That team in black-and-white stripes went on to conquer all, sweeping teams aside. I might have been chosen to be a Blue, but the Bianconeri stripes are visible on my soul too.

Fast forward to summer 2013, when news broke that my two favorite football clubs would play each other, that too in the country I lived in, there was no curbing my enthusiasm. Having never lived in Europe, this was to be my first opportunity to see either of my two teams, and instead I would go one better, and watch the both of them! The wife, who has had to endure early morning yelling and screaming at the TV and dawn trips to The Banshee with the Boston Evertonians to catch Everton games, knew how important this was and graciously offered to modify our anniversary vacation so that this event could be accommodated. Now if only Everton could start qualifying for the Champions League this would not be such a novelty.

The Everton USA fan club had organized a pregame party for the game, and in the spirit of brotherhood invited the Juve SoCal group for a drink and some banter before the match. The teams were playing at AT&T Park, which is usually a baseball field and home of the San Francisco Giants, who were World Series champions in 2010 and 2012. The party was great fun, with easily a couple of hundred people packed into Pedro's Cantina and the Everton and Juventus fans trading chants and two deluded Liverpool fans walking in and getting roundly booed as they hid their noses in their beers. We also got to meet Graeme Sharp (Sharpy!!).There was one other special gesture before fans headed off to their seats at the stadium, with the two sets of fans holding a small candle-lit memorial to those who lost their lives in the Heysel Stadium disaster in 1985. Everton has always led from the front with their responses and support for their red brethren in the Hillsborough incident, and kudos to David Kurtz for coming up with the idea for the vigil for our fellow Italian fans.

Football games at baseball pitches tend to be slightly awkward as the footy rectangle sits awkwardly on the baseball diamond, so our first row behind homeplate seats which would usually be prime for that sport ended up right by the corner flag! We had Tim Howard defending the goal in front of us and to be honest, he had little of note to do in the first half. Juve starting what was in essence a 'B' side didn't help matters much either. What was interesting is that Roberto Martinez did play the three-man defence that he stuck with at Wigan, and that too against Antonio Conte, who pioneered the same formation at Juventus, to the tune of consecutive Serie A titles.

John Stones joined Phil Jagielka and Sylvain Distin in the back three and looked calm and composed throughout the night, even hitting the post with a header. Of course, his serene demeanour would manifest itself later on in the game, but more on that in a bit. Everton were patient throughout, and ball distribution down the sides where Leighton Baines and Seamus Coleman played wingback looked fantastic. Apart from Victor Anichebe who looked ill at ease alone upfront, pretty much the whole team had an excellent outing.

Kevin Mirallas finally gave us something to cheer for as he jinked his way past the hapless pair of Luca Marrone and Federico Peluso to hammer home behind Marco Storari for the first goal of the game. It was at that point that Conte had had enough and brought on legendary midfielder Andrea Pirlo. From there on there was only one team in the game and it wasn't the Blues. Pirlo has a stately, unhurried manner, and always manages to slow the game down or speed it up to whatever tempo he wants it at. One feels that under Martinez we will end up looking that way soon too, but with multiple players filling in the 'maestro' role. Unsurprisingly, with just nine minutes to go, Leon Osman made a poor clearance out of the box and Kwadwo Asamoah rifled home. 1-1 and headed to penalties.

Osman's misery was not over as his penalty was then saved and the penalty shootout got off a terrible start for the Blues. Tied at 4-4 with one shot to go, the ever-reliable PIrlo then astonished the crowd by dragging his penalty wide of Howard's right post. Into sudden death we went, Stones stepped up and shanked his 'Panenka' penalty which nevertheless went in past a visibly irritated Storari and instantly initiated the "Pirlo wears Stones' pyjamas" meme that went around the interwebs in seconds. Howard then saved from Peluso to end the game and send the Blue half of the twenty two thousand odd crowd into raptures, chants of "U-S-A.. U-S-A.." filling the air as the seagulls swooped in.

Game ended and we trooped off back to the bar - for me personally I wouldn't have wanted either team to lose so for it to go to sudden death was probably the only satisfactory result, and Everton deserved to win the game on the balance of play. I couldn't have envisioned a more perfect evening for the first time I saw either of my two favorite football teams play! 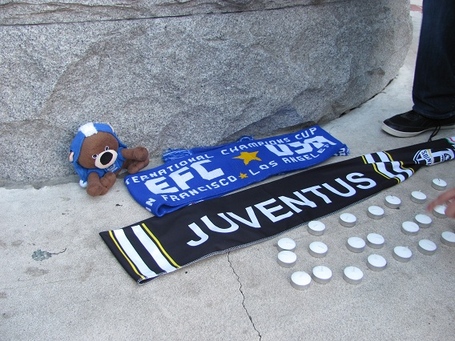 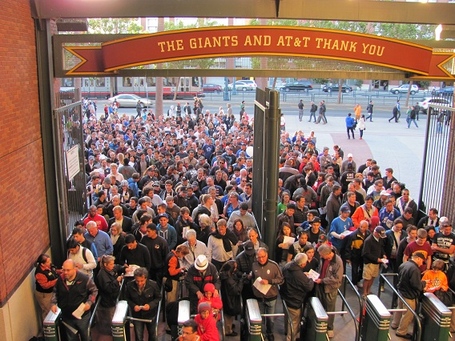 Fans filing into AT&T Park before the game. 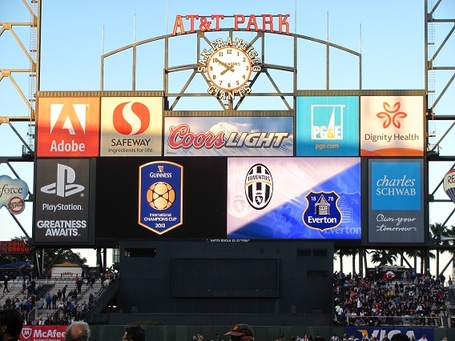 Scoreboard at the AT&T Park before the game. 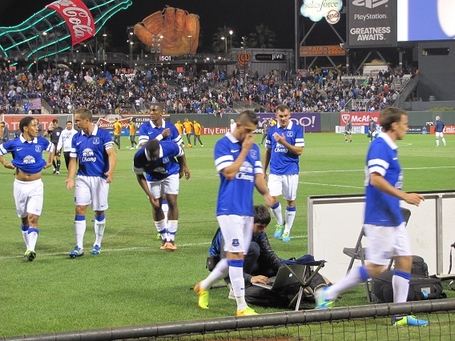 Everton players leaving the field after an uneventful first half. 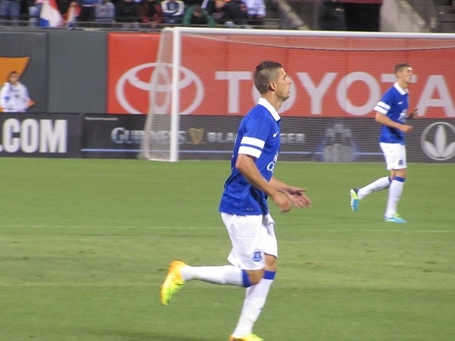 Kevin Mirallas about to receive the pass that would lead to his goal. 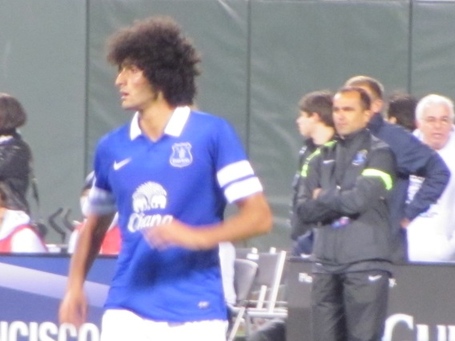 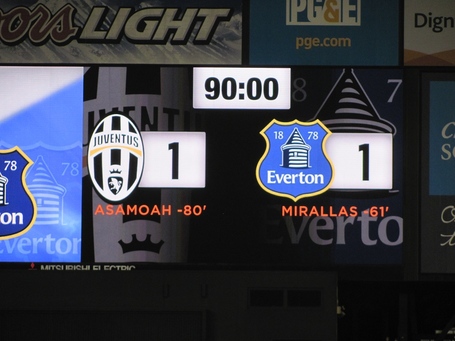 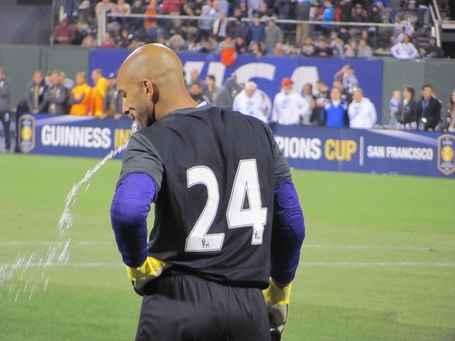 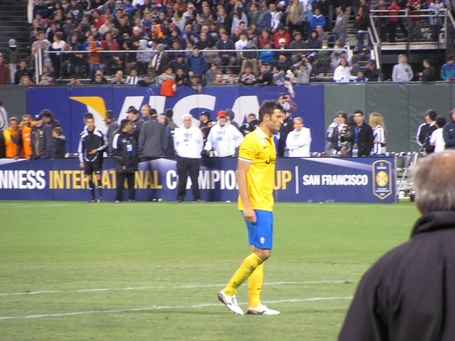 Federico Peluso about to have his penalty saved to end the game. 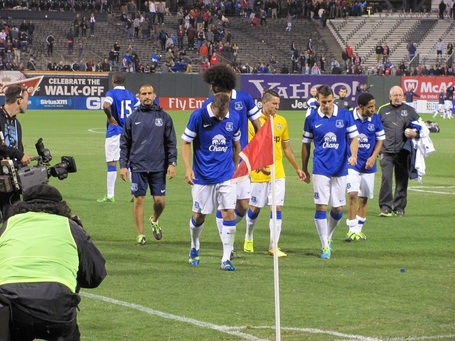 Everton players leave at the end of the game. 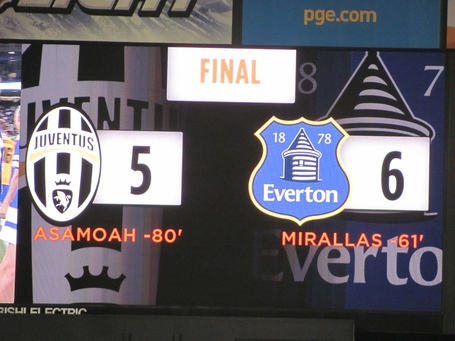 Scoreboard at the end of the game. 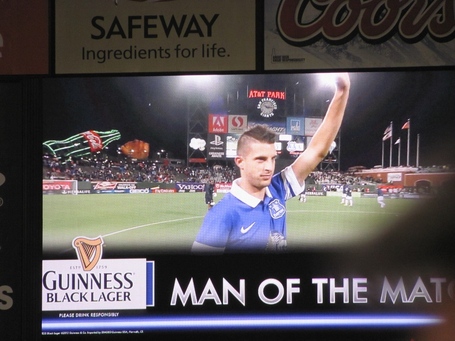 Kevin Mirallas acknowledges the applause at the end of the game.