Here's what didn't go right for Everton on Saturday.

Two games into the Roberto Martinez era and we have yet to see the manager truly make his mark. During this weekend’s fairly banal 0-0 draw at home against West Bromwich Albion Everton looked virtually indistinguishable from the team that played under David Moyes. Transitions take time, and all that, which is fine, but at the same time I’m somewhat leery of a team that can easily be taken right out of its game plan by a little token pressure from a midtable side. And that’s exactly what happened on Saturday.

Here are Tim Howard’s passes during the first 15 minutes of the game. 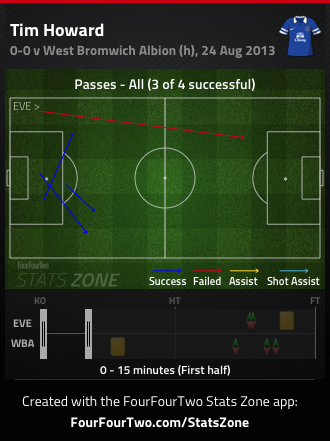 Seems pretty much like what Martinez would want. Its only four passes, but three of them are short distributions and one seems like a sensible clearance from the corner. Now, here are his passes for the next 70 minutes. 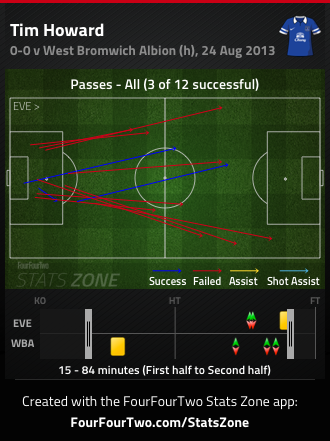 West Brom applied pressure on Timmy’s passing early on, so that was all she wrote for playing from the back (in the last five minutes of the game Timmy tapped it short twice so that a defender could bomb it into the zone, I cut those out). Now, for some teams that would be fine. You take what the defense gives you. If they give you room to play, you use it, if they try to choke off the space go get in behind them. The problem is that’s not how Martinez wants to set up. For Martinez, getting pressed is a good thing, not a bad thing. The whole point of Martinez’s system is to beat the press and exploit the space by working the ball on the ground. In fact, if they don’t press you, part of what Martinez wants Everton to do is keep working the ball back into its own territory until the defense follows. So, if all it took was a few minutes of aggressive defense from a mediocre team, one that isn’t even a particularly strong pressing team, to get Everton to revert to the form we’re all used to seeing.

That form involves lots of crosses, and lots of shots that have very little chance of going in the net. 22 shots is a ton, it’s a really big number, and putting up stats like that on a regular basis is good, except there are a whole heck of a lot of caveats to go with that number. Mostly they have to do with where those shots came from. 13 of them came from inside the penalty area, which would be great, except that of those eight, five were from set plays, of which unsurprisingly, four were blocked. In total of the 13 shots Everton took in the penalty area only six were on target. None of this is to say the shooting performance wasn’t good, it just wasn’t quite as good as the numbers make it look. That’s the same problem they had last year, lots of chances, but very few good chances.

Looking at it another way, here are all the chances Everton created last weekend. 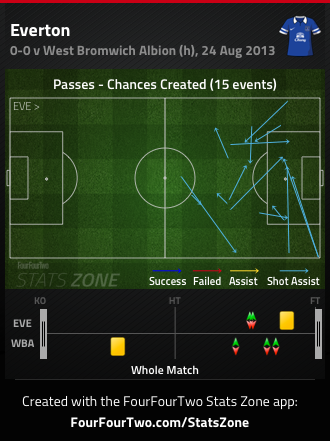 Let’s find some good chances shall we. First let’s eliminate all of the passes outside the chances created outside the penalty area. Shots from distance look awesome, but unless your name is Gareth Bale they generally don’t have a particularly high percentage chance of finding the back of the net (although I will at this point allow everybody to pause and think wistfully about young Ross Barkley’s beautiful strike against Norwich). Ok, now let’s eliminate the two corners, because again, it’s really really unlikely for a team to score from one (something like 1.2% of corners result in an assist). I’m also knocking out the long cross from the right hand side that Seamus Coleman hit. Headers from the 12 yard area aren’t a particularly good outcome for an offense. All of a sudden we’re down to four attempts, and two of those were created at really steep angles within the penalty area. Shots from outside the width of the six yard box, also not particularly high quality shots. And now we’re down from 15 chances created, to two. Seamus Coleman’s little cutback to Kevin Mirallas, and the pass that almost one the game, Phil Jagielka’s deep cross for a wide open Fellaini volley which thumped the woodwork. Two great chances out of the 15 created is not a team building high quality looks.

There are lots of reasons for this, but they all general stem from the same place, Everton’s off the ball movement is just god awful. There are plenty of culprits; in fact the entire front four are probably to blame. It’s tempting to just look at Nikica Jelavic, and his four offsides in the first 16 minutes and stop there, and that is a real problem but it’s not the only one. The Moyes system was just extremely static, in no small part because aggressive and unpredictable runs from wingers and midfielders means they risk being out of position if the ball is lost. So, for the most part it just wasn’t done. Watch the Everton team and you’ll see very little off ball movement, except for the ever present overlap run of Leighton Baines, which isn’t so much creative movement as a debilitating crutch at this point.

Much has been made of the sheer number of chances Baines creates, but most of those chances aren’t very good. It’s him skillfully working himself free to get a cross in from a corner, and pick out one of two or three mostly stationary targets. It’s a bad way to conduct offense, and it’s a system that’s just begging a fan base to shake their heads in bewilderment week after week when somehow they don’t manage to get results despite oh so many shots. The benefits of the system of course were that it allowed Everton to put a ton of shots on goal while not exposing themselves defensively all that often. But, the fact that all of those shots aren’t going in, that’s not bad luck, it’s the price the team pays for the shots they are taking.

That system is supposed to be on the way out in favor of another unconventional approach. There are supposed to be growing pains during that process. That’s fine, but in order for there to be growing pains there has to be some sign of growth. That hasn’t happened yet. And it’s a little worrying that all it took was 15 minutes of light pressure from West Brom to keep the process from getting under way.