What did we really learn about Everton during their first match under Roberto Martinez?

There was only one thing missing from Everton’s debut on Saturday. Somehow the sports gods conspired to keep the Toffees from taking all three points. Everton truly dominated the game from start to finish, against a Norwich team that didn’t put up a tremendous amount of opposition. That meant that we got a nice performance to start the season, but it also means that most of Everton’s longer lasting tactical questions remain unanswered.

For starters Everton were unquestionably unlucky to draw. When you only concede two shots on target and they both happen to go in the net, well, stuff happens. Leaving aside the copious amounts of possession for now, Everton thoroughly outshot Norwich by every metric available. They took more shots, 20 to eight, put more shots on target, seven to two, and took more shots from inside the penalty box, 13 to four. But hey sometimes it happens, shooting more doesn’t guarantee you wins, and sometimes a miss-hit cross finds Ricky from the Wolf Shop and he buries a pretty looping header in the back of the net. You just hope those things even out over the course of the season.

So now let’s get to the meat of the game for Everton fans, all that pretty pretty possession. The fact is that Norwich were perfectly happy to sit deeply and defend, ceding tons of time on the ball for Everton to use. Everton had more possession than anybody in the Premier League during opening weekend with 67.5%. That’s a ridiculous amount, the kind of extreme possession number that’s only possible if you’re Barcelona, or if the other team is willingly conceding you the ball. That’s exactly what Norwich did, and it was a fairly effective strategy. And when presented with an opponent sitting deep in their own territory, Everton looked a little bit like they always do. Here were their top four pass combinations. Look familiar? 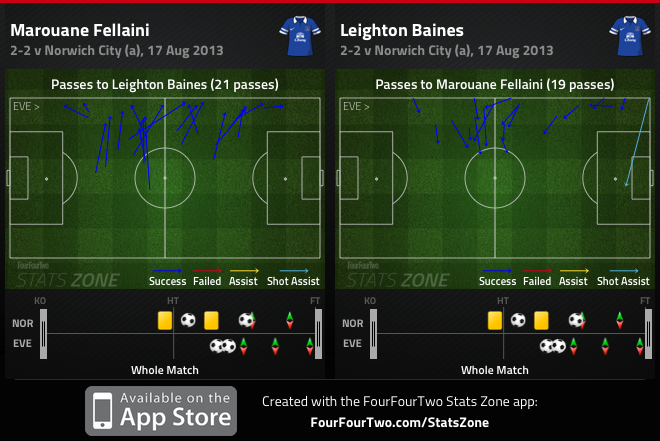 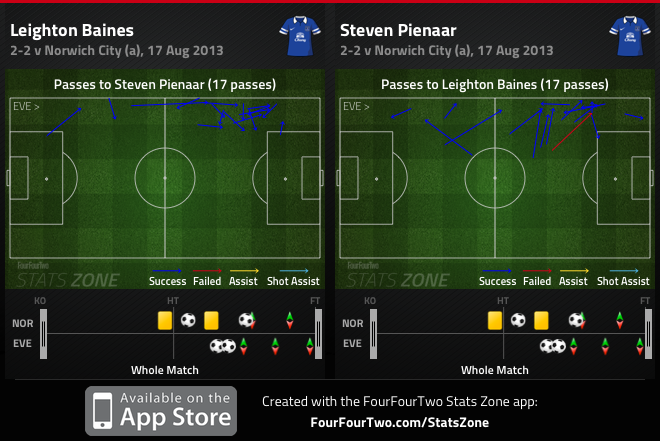 As was their habit last year, Everton had a hard time breaking down Norwich in the final third and resorted to cycling the ball on the left side of the field. Of course, unlike last year, they had Ross Barkley to unlock the defense with a ridiculous screamer of a left footed goal. And while tons of virtual ink will be spilled about his performance, for me, quietly, the star of the day was Marouane Fellaini.

As was expected Fellaini started as part of the deeper midfield pairing with Leon Osman, as opposed to the physical goal scoring attacker he morphed into under David Moyes. But, unlike in most systems where you’d expect Fellaini’s movement to be limited, as he protected the back line, the added freedom Roberto Martinez allows his players let Fellaini loose to roam the field. And he took advantage, popping up everywhere to receive the ball and cycle possession with a surprisingly accurate 89% completion rate (one thing that will be interesting to track this year if Fellaini stays, will has pass completion dramatically increase as he plays in a system that allows him to attempt fewer passes with his head and more with his feet). Tellingly he was able to put his attacking stamp on the game without taking a single shot from open play (he had two from set pieces).

And defensively the big Belgian was everything we’ve come to expect, winning four of eight tackles. He was dominant in the air winning eight of nine aerial battles, and all seven he contested in his own half, and clearing the ball seven times, five with his head.

A big part of the reason Fellaini had such a strong game is that he was often more advanced than midfield partner Leon Osman, who had a competent but somewhat anonymous game, largely staying in the middle of the field and providing stability while the rest of the team buzzed around him. Everton weren’t hurt by the alignment mostly because Norwich didn’t try to hurt them, but against better opposition it will be Fellaini, or his replacement may be forced into a somewhat more conservative role by opponents who have some actual interest in combining to play attacking football.

Defensively, both goals were the result of runs in behind Leighton Baines (yet another common refrain from last year), but both should have been dealt with well before they ended up in the back of the net. The first one was, and only an unlucky ricochet led to the Norwich’s Whitaker breaking through the defense to take the shot which Howard would parry right back into his path for a goal. The second one was also a little fluky, although Everton’s defenders probably were a little asleep at the switch watching van Wolfswinkel. Distin and Jagielka are both strong defenders, but they also had problems over the last year defending one on one in physical aerial situations.

Clearly Everton looked different yesterday. They completed a whopping 498 passes, more than anybody but Manchester City, and took 847 touches, again only behind the Citizens. But, for now at least that’s mostly noise. Half of those passes, 248, were in the middle of the field, and more than that, 280, were played either square or backwards. And they were playing a team in Norwich who had essentially decided not to contest any of those balls.

Realistically the opening match of the season for Everton was a nice set of training wheels. Norwich is one of the increasingly small number of teams uninterested in pressing defensively, and consequently Everton got to implement their bright shiny new gameplan without any contest from Norwich. So, we really don’t know how much progress they’ve made. We don’t know whether they’ll be able to play around and through defenses which challenge them, or whether the defense will hold against teams that actually have a cohesive plan of attack. What we do know, is despite looking drastically different in the middle of the field Everton displayed the same strengths and weaknesses that they rode to a sixth place finish last year. Defensively they were mostly good, except in one against one aerial duels, and offensively they struggled to unlock a defense that was dug in against them. The more things change, the more they stay the same.

Except for Ross Barkley, that kid’s awesome.