Tactical Analysis: Inside the mind of Roberto Martinez

Breaking down how Roberto Martinez approached the game at Wigan may give some hint of what he would attempt should he arrive here.

Share All sharing options for: Tactical Analysis: Inside the mind of Roberto Martinez

We interrupt your regularly scheduled Everton season wrap-up to bring you this Wigan tactical analysis. With Roberto Martinez and Everton seeming to circle ever closer, now seems like a good time to delve a little deeper into what we can expect to see from the soon to be former Wigan manager, if he does indeed arrive at Goodison.

Martinez has a reputation for preferring attack minded, possession based football. It’s mostly deserved. Both Wigan and Swansea (the team Martinez constructed and coached to a promotion to the Championship before moving to Wigan) focus on ball retention more than most teams. In his four years at Wigan, Martinez’s teams never saw less than 50% of the ball, which is nice as far as it goes. The unusual component to Wigan’s possession, however, is that it didn’t actually lead to shooting the ball more. In Martinez’s last three years the team took a below average amount of shots. Last season, Wigan were by my measure the slowest paced offensive team. What I mean by that is, when Wigan had the ball they took more time per shot than any other team in the league. It’s an approach that stands out as different from other teams in the Premier League, and deserves some closer examination.

In theory one reason for the patient play could be hunting for better shots, but the numbers don’t particularly support that. Wigan’s shots on target were not particularly good, and they were a well below average team in terms of creating big chances according to the data. All that possession didn’t get them more chances in the penalty area either, as they were only ninth in the league in terms of the percentage of their shots from inside the box. In other words, Wigan seemed to lack the ability to use the ball to create good scoring opportunities. In their second to last game of the season against Arsenal, a game they desperately needed to win, and a game which they were competitive in until the hour mark, their two biggest pass combinations were among defenders. 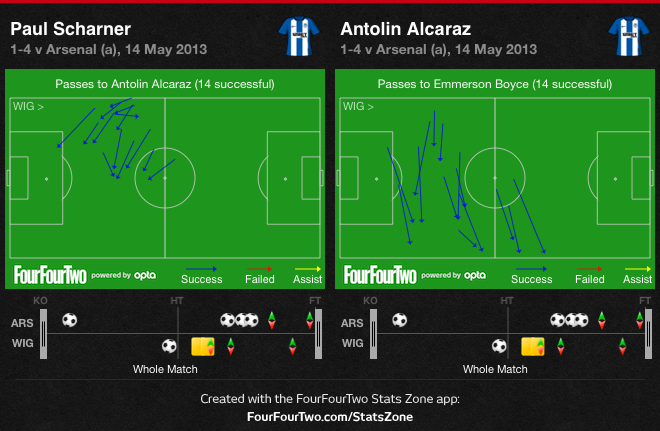 Lots of possession, including conservative possession, isn’t a bad thing. It’s a strategy designed to draw defenses out, and create spaces to exploit. You just need the players to exploit those spaces, both by creating chances and by finishing them. Wigan didn’t really have the quality to do that, which meant that the shots they got weren’t especially higher quality for all the effort that went into creating them. Would Everton be a different story if the strategy were the same. Well, Kevin Mirallas is almost certainly more talented than anybody on the Wigan roster, and Leon Osman and Ross Barkley both seem like they would be ideally suited to a system that would be designed to provide them with more space in the final third, instead of the frequently crowded areas that Everton dealt with this year. It’s a lot of guesswork though to be sure. We are all used to watching an attack that pinned opposing teams back. That was good at preventing counter-attacks and made it easier for Everton to maintain uncontested possession, but it wasn’t an offense predicated on creating good chances (it was mostly left to the magic of Baines’s left foot to do that). Still, I’m salivating at the idea of a system which will help get Mirallas the ball at his feet running at defenders more.

When thinking about how Martinez’s teams defended at Wigan, it’s important to remember two things. One, they were awful. Two, they were really really awful. Trying to break down the Wigan defense also highlights the problems with the traditional system we have of describing things by rows of players. Calling Wigan a back three or a back four is silly. Here’s why.

Martinez, like lots of managers, is pretty married to the idea of keeping one more defender in reserve than the opposition has attackers. This is not new. What's interesting is how various managers have reacted, as playing two strikers has gone out of vogue. Most, have just given their full-backs more freedom to get up the field. It’s still nominally a back four, but in today’s game full-backs are more like traditional wing-backs anyway, with offensive influence equally as important as defensive contributions (this has obviously been especially true at Everton). The same concept applies in a modern three defensive man set-up. It’s just that one of the fullbacks from the back four, no longer has any defensive duties. Instead, he just operates as a wide midfielder, and the remaining three defenders slide over to cover for him. This is why most modern back threes don’t actually consist of three central defenders. Instead, like Man City with Zabaleta, or Barcelona with Dani Alves, when teams switch to a three defender lineup, one fullback is eliminated and the defense slants over to cover. That way, when in possession, the team is still able to advance one of their defenders and still leave two at the back guarding against a lone striker (another way to accomplish this is for the third defender to basically be a defensive midfielder, who advances in the middle of the field, and drops back into the back line without the ball).

When Martinez switched to a back three at Wigan, he did it for two reasons. He was forced to because of injuries, and he wanted to better utilize Jean Beausejour’s abilities on the left. The back three at Wigan almost always consisted of at least one player, who we’d all consider to be a wide defender, and sometimes two. Neither Emmerson Boyce nor Maynor Figueroa is a true center-back by any stretch of the imagination. For Wigan, they play there all the time.

Having said all that, Wigan’s defensive system was broken. They were simply unable to prevent teams from generating lots of good shooting opportunities against them. Controlling for time of possession, Wigan were the absolute worst team in the Premier League at preventing teams from shooting. When defending, Wigan allowed teams to shoot more quickly than any other team in the league. You could understand that horrible number if they were knowingly conceding bad shots in order to better protect against big chances, but that wasn’t the case either. Over 13% of the chances they gave up were "big" chances, which was worse than the league average. Now again, a lot of that is down to personnel. Data shows them making 17 defensive mistakes that led to goals, which was also the worst in the league.

Wigan’s defense was full of players making mistakes, unable to stop teams from getting chances and prone to giving up easy opportunities. No wonder Martinez was fixated on keeping the ball. Of course, that presents somewhat of a chicken and egg problem. An approach predicated on getting people forward and using the ball will naturally challenge a team’s ability to maintain balance and recover defensively when they lose possession. Wigan clearly weren’t up to that challenge. So, did the emphasis on possession cause the bad defense, or was it the bad defense that led to the emphasis on possession in order to try and keep teams at bay?

Regardless, Everton’s defensive personnel are much stronger than Wigan’s. While a lot of the talk around Martinez focuses on playing three at the back, I wouldn’t necessarily expect that system to be implemented at Everton. Neither Coleman nor Baines would be particularly good fits in the hybrid CB-LB/RB role, and while Martinez certainly could play Jagielka/Heitinga/Distin, that doesn’t really fit with the back threes he has employed at Wigan.

Roberto Martinez is a manager more married to an approach than a formation. That approach certainly had its limitations at Wigan. His attackers didn’t create enough high quality opportunities to justify continuing to expose a collection of defenders, and his defenders did absolutely nothing to justify the faith Martinez placed in them to anchor an attack minded system. Those faults can likely be attributed to the lack of talent Martinez was working with, though. It’s a mistake to assume that a more conservative system would have achieved better results. In the best case scenario, Martinez will install a possession based, confident brand of patient attack minded football at Everton. The kind of football that sometimes flashed through at Wigan but was held back by the lack of talent. In an evil and desolate world, however, the cracks in Martinez’s approach will prove to consistently show themselves at Everton and we will come to realize that it was the brand of football responsible for the lapses at Wigan, not just the players’ execution. Given his results to date, the first scenario is certainly more likely than the second, but that doesn’t make it a sure thing. Either way though, while Martinez might change personnel, and tinker with the formation, don’t ever expect him to shy away from his philosophy.