In this piece we will look at the current Swansea manager Michael Laudrup and the tactics, ethics and more he could bring to Goodison park.

Michael Laudrup took the Swansea job in June of last year, after former manager Brendan Rodgers left the job. Laudrup gave the team stability and ensured they experienced another year in the Premier League. He didn't only ensure it he made clear space between Swansea and the back end of the table, he also helped his side lift the Capital One cup at Wembley, thus gaining them Europa league football next season. All this in just one season in the Premier league.

The team that Laudrup has fielded this year has been balanced and the ability of the players has been there for all to see. Since joining the club, as a Laudrup transfer, Michu has been this years suprise package , scoring 17 league goals. Michu has certainly been a key to Swansea's success this season, but, Michael Laudrup deserves the praise for his eye for finding a player that can score goal consistantly in the league.

This is how Laudrup has set his Swansea team up: 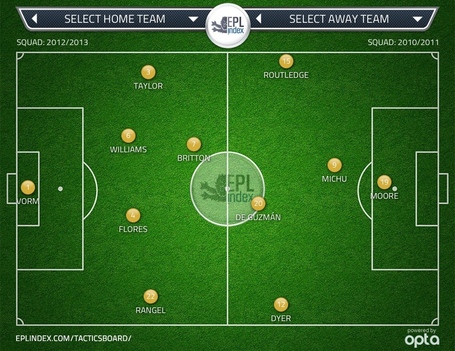 In the Swansea side I see players similar to the players we have here at Everton, for example, Michu plays in a similar style to an inform Jelavic and Leon Britton has a similar playing style to that of Leon Osman. I don't think the two teams are a million miles away from each other. The team above is an attacking team, that line-up to ensure there is always three Swansea players in the opposition's half most of the time. They also have two quick wingers, which has helped with Laudrup's desire to break quickly and smoothly.

There is no doubt that Michael Laudrup is attack minded on the whole, however, his defence has been better than most, currently in 8th position on goals conceded (46), one more than Tottenham (45) and four more than Liverpool (42). Our current goals conceded in the Premier league is 38.

Currently Swansea have scored just as many goals as they have conceded, for me the goals conceded would certainly have to be address if he was to get the job at Everton. But the attacking side is something I admire greatly. He has bought a striker capable of consistently scoring goals, in Michu, that is another thing I feel is crucial for a team like Everton.

To go forward, as a team we need someone who can provide us with an edge, a bite, that little bit of fire when the game is dull, but also that capability to go to the Chelsea's, Arsenal's and Manchester United's and be able to go for a win from the out set.

I believe that Laudrup, would work positively for Everton and will be able to take the next step to making our club a top 4 club, but again if he is not backed early on he, as Moyes did, may find it difficult.

This is how I think he may line his Everton team up, if he was to be given the job. 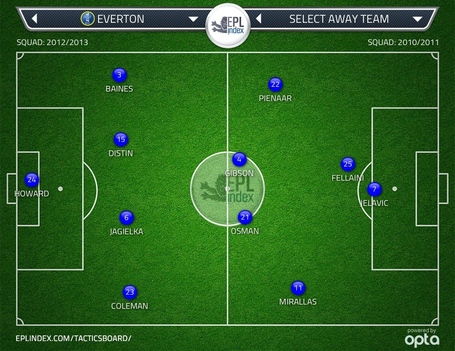 I feel that Laudrup will want to keep the balance and the structure of the side. However I think he will see similarities in Jelavic, to what he has seen in Michu, both play off the shoulder of the defenders and both have a killer touch. Whereas Moyes this season has centred his tactics around Fellaini, I think that both Fellaini and Jelavic will benefit more under Laudrup. This will be due to his first year experience in the Premier League. I highly doubt Laudrup expected Michu to have such an impact on his side and I don't believe he thought his contribution could be so significant to their success. He now trusts the forwards to do the job in his current side and I think he will transform Jelavic, so we can once again rely on him.