It's another typical Everton weekend. An excellent game plan, executed largely well, and marred by one or two costly errors that cost the team points.

Games like Sunday are a pretty good example of the limits of tactical analysis. Offensively Spurs were always going to dominate the ball, maintain possession in the middle of the field, and try to pass their way through, it’s what they do. Defensively, Spurs were going to press high up the field and play a high defensive line, they do it every game. Moyes deployed a team designed to protect the middle of the field, and play on the counter attack to exploit Spurs’ strategies. That’s pretty close to the entire tactical story. The rest is just about execution, and the real irony is that Everton executed well over the course of the game, just not at the moments that mattered.

The big failing, of course, was Kyle Walker beating Baines in the left corner to create the equalizer. Walker saw increasing amounts of the ball as the game went on, which makes sense. He was the only real source of width and speed Spurs had, their only plan B after Everton clogged the middle. Walker had plenty of time and space on the flank, mostly getting isolated 1 v 1 with Baines. That was fine though, because until the goal, he basically squandered all of his opportunities. No completed crosses and tons of unsuccessful take on attempts in the areas that matter. In effect Spurs were playing right into Everton’s hands. If you look at the way Everton played, I think Moyes would accept the game coming down to the ball on Kyle Walker’s foot, squaring off against possibly Everton’s best player, and certainly a strong defender on the ground, in Baines. Sometimes it just doesn’t work out. 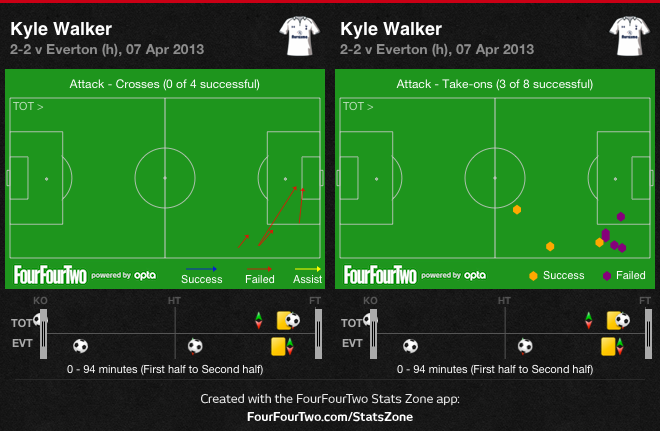 It seems odd to say that Everton had Spurs right where they wanted them, given the amount of time Spurs had on the ball, but it really is the case. There’s really nothing wrong with conceding possession if you do it without conceding real chances, and Everton did that for the majority of the game, especially after they took the lead. Spurs may have had 62% of the possession but that doesn’t mean anything if you don’t look at what they did with it. They only completed one more crosses than Everton, created one more clear chance, and took only five shots inside the box to Everton’s four. Instead of leading to dangerous chances Spurs’ possession fizzled out more often than not. They launched 15 shots from range, only managing to get four of them on target, and in the last half hour only managing to get one out of eight on goal. They crossed the ball unsuccessfully a whopping 27 times. 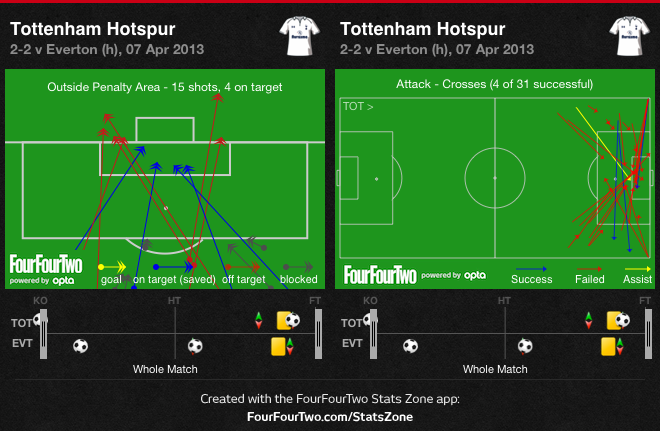 Those are really good numbers. Consider that for the season Spurs put 49% of their shots on target, and on Sunday that number was only 35%. Their crossing accuracy is usually 21%, and Everton kept them to 13%. Combine that with the fact that Spurs actually had the ball for 10% MORE of the time than they’ve averaged this year, and what you get is the justification for a game plan based on sitting back. Obviously the giant caveat is that Bale didn’t play, and his presence makes a huge difference. But, if you look at the game as a battle between Spurs trying to minimize the impact of Bale’s absence and Everton trying to exploit it, clearly those numbers indicate that Everton won that battle.

And now for a couple of unrelated bullet points:

--Selecting Barkley was certainly a surprise from Moyes. It was interesting that his desire to not start two pure strikers on the road against a good team won out over his desire not to start young players on the road against a good team. It’s just another telltale sign of how focused Moyes was on controlling the center of the field. Barkley wasn’t bad per se, but he wasn’t particularly involved in the game. He looked like what he is, a kid who may have talent but isn’t ready yet.

--It seemed pretty clear that Moyes got stuck in a substitution bind at the end of the game. Ideally he would have taken off one of the two strikers to throw another defender/midfielder out there. The problem was that Anichebe was the only real outlet ball that Everton had, and taking him off would have meant absolutely no respite to Spurs attack (as opposed to Victor missing a golden chance to put the game away late). But, since Jelavic came on as a sub, Moyes was more or less stuck keeping them both on the field. I’m not sure there’s any good solution to that problem.

--Speaking of defensive substitutions, I continue to have absolutely no problem bringing on Naismith for Mirallas late in games. Mirallas might be the most dynamic offensive player Everton have, but that doesn’t really do them any good when he’s supposed to be sitting at the edge of his own penalty area. And even if Moyes wanted to stick with him, picking up a yellow card in a dangerous location in the 82 minute isn’t likely to instill confidence. It’s not that Naismith is a good defender or anything, but he has better positional discipline than Mirallas, and for the last five minutes of a game that’s fine by me.

--There's something particularly fitting about this game ending with both teams being able to walk away having dropped points from a winning position. Its really been the story of both their seasons.

It’s understandable that we all walked away from the Spurs game a little disappointed, but on balance a draw on the road against a good team is an absolutely acceptable result. It doesn’t do much to improve on Everton’s Champion’s League bid, but it doesn’t end the dream yet either. And now we get Pienaar and Fellaini back against an absolutely brutal QPR team at home. It would be nice if, for once, that just ended up being a nice, comfortable win. With the big games they have coming up we could all use it.