Sunday's meeting at White Hart Lane between Everton and Tottenham Hotspur was an entertaining, back and forth encounter that ultimately keeps Everton in the European conversation - but it could have been so much more.

- For the second consecutive week, David Moyes had a few surprises up his sleeve as far as his team selection was concerned, though the suspensions to Marouane Fellaini and Steven Pienaar may have forced the manager's hand. In any case, Ross Barkley was handed his long awaited third career league start, having not started a game since way back in August 2011. It's been a long and strange odyssey for the highly touted prospect since then, but nineteen months and two loan spells later Barkley suddenly found himself thrust into the midst of a huge Premier League showdown.

- The other surprise was John Heitinga being given a defensive midfield assignment, with Barkley playing on the wing despite most people viewing central midfield as his ideal position. I'll let Mike handle the tactical breakdown as usual, but I was a little confused by this setup because it seemed to go out of its way to play a handful of players (Heitinga, Barkley, and Leon Osman in particular) out of position. Osman had a brutal game playing in an advanced role and Darron Gibson struggled a bit as well, and I wonder if both players might have benefited from playing alongside each other in front of the back four.

- Okay, let's get to the match itself. It was the stuff of nightmares for Everton, as they found themselves trailing not even a minute after the opening whistle blew. Without Gareth Bale to initiate the attack, Spurs turned to Jan Vertonghen to provide an unlikely assist from the left flank, but at the same time the Everton defense was nowhere to be found on the play. The ball bounced once in the box before Emmanuel Adebayor directed it with pace right at Tim Howard, who got a piece of the shot but was unable to keep it out.

- At this point plenty of teams would have folded, but to their credit Everton didn't panic. Osman pounced on a Michael Dawson giveaway and quickly fired a shot wide of the mark, but the breakthrough would come minutes later after Barkley did well to win a corner kick. Leighton Baines took the corner and found his fellow England international Phil Jagielka fading away at the back post, and the latter did brilliantly to head the ball into the ground and beyond the reach of goalkeeper Hugo Lloris.

- With only a quarter of an hour gone and each team with a tally on the scoreboard, it looked like we might be in for a wild game. However, the rest of the first half was a pretty tame affair, with chances few and far between for both sides. There was some moaning from the Spurs fans for a penalty after it looked like Gibson might have handled the ball in the penalty area, but replays showed that the appeals were unfounded. Victor Anichebe limped off with an injury but ended up returning to the game and seemed none the worse for wear; indeed, it was another terrific showing by the Nigerian forward.

- It was important for Everton to take the initiative as the second half got underway, and there were good signs when Gibson was quickly teed up for a shot that came close but was always bending away from the far post. Barkley only lasted seven minutes after the restart before Moyes decided to yank him in favor of Nikica Jelavic, an abrupt end to a largely disappointing return for the young starlet. I still think both the coaching staff and the fans need to show patience with Barkley as he works through the growing pains; it's easy to forget that he's still a teenager.

- Then, for the second week in a row, a moment of absolute class from Kevin Mirallas put Everton into the lead. Gaining possession on the right, the Belgian proceeded to go on a mazy run through the Tottenham defense, embarrassing Vertonghen and finishing wonderfully past Lloris. It was another terrific individual effort by Mirallas, who is quickly becoming Everton's most important attacking player in the absence of Fellaini (Baines gets a nod too, though he was effectively shut down by Kyle Walker in this match).

- Spurs had hardly made a peep since their first minute stunner, but the Everton defense got a wake-up call when Mousa Dembele's deflected shot was saved by Howard off the crossbar. Heitinga was the culprit for making the save more difficult than it should have been, but Howard did very well to get just enough of the ball to maintain Everton's 2-1 advantage.

- With mere minutes standing between Everton and a massive victory at a stadium where they have historically struggled, a defensive breakdown and a bit of bad luck wiped out all of the good vibes. Adebayor's bid for a brace was denied by the post, but Spurs got a break when the rebound fell perfectly for Gylfi Sigurdsson. From there the finish was simple, and White Hart Lane (and Andre Villas-Boas) went berserk.

- Thankfully, Tottenham were unable to complete the comeback, failing to duplicate Everton's feat from earlier this season. On the other hand, it could have been another dream finish for the Toffees, as Anichebe managed two more good looks before Andre Marriner blew the final whistle. But it wasn't to be, as the striker's first chance sailed over the target before his second (more dangerous) effort was caught nicely by Lloris. 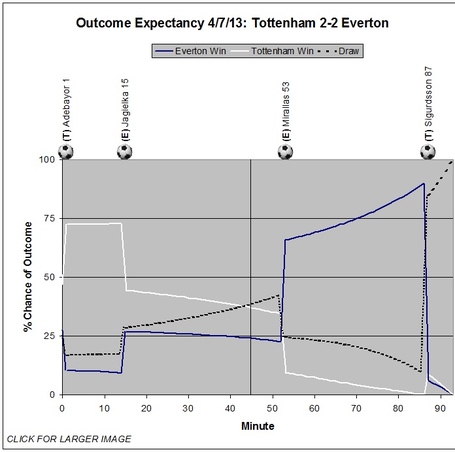