With both squads missing crucial players uncertainty reigns before an absolutely crucial away game for the Toffees. How the teams will line up is anybody's guess. Here's mine.

This is certainly not the preview I expected to be writing. I sat down yesterday to compose my thoughts while watching Spurs host Basel in the Europa League. I was planning on writing about the fairly unique relationship of Aaron Lennon and Gareth Bale. Twenty minutes in I had to scrap that plan when Lennon limped off with a leg injury. Good thing I’m watching this, I thought, now I can focus on how Spurs use Bale in the absence of a speedy winger to balance the field. Sigh. Maybe someday I’ll get to use those notes. Obviously they’re useless now, since Bale got his ankle rolled over and is out at least a couple of weeks. That’s good news for Everton obviously, but tactically it makes the waters a lot murkier. Whereas before Everton’s task was clearly first, second, third, and ninety-sixth to STOP GARETH BALE, now the pattern the game will take is decidedly less clear.

It’s an interesting challenge for David Moyes. Over the years it has become clear that against good opponents, especially on the road, Everton’s tactical plans start on the defensive side of the ball and evolve from there. Whether it’s last week’s back three or Coleman following Bale around over the last couple of years in matches against Spurs, or Tony Hibbert getting a seemingly insane start in central defense last year against Manchester City, Moyes will tinker to take away whatever his opponents top attacking option is, then fit any offensive plans on top of the defensive structure.

That’s not to say that Everton don’t have an offensive identity, but in big games it can get subordinated to defensive game planning. Offensively Everton have been defined by two things this year: Fellaini’s physicality, and creating overlaps on the wings. Of course, against Spurs they’ll be without Fellaini and Pienaar, arguably their best winger (and if you count Mirallas as a forward no matter where he gets deployed, then the case for Pienaar moves from arguable to slam dunk). That leaves Moyes faced with a conundrum. There is no defensive hook to build his game plan around, and offensively he’s missing the main identity of his attack. What’s a manager to do?

Let’s start with what we do know. First, one of the hallmarks of an Andre Villas-Boas side is the high defensive line and that’s not likely to change no matter who the strike force is composed of. Second, all of the possible wing replacements for Bale (who doesn’t really play winger anymore but whatever) and Lennon are players that are more comfortable in central positions. Gylfi Sigurdsson, Lewis Holtby, Clint Dempsey, and Mousa Dembele are all somewhere between pretty good and very good, but they are all similar in that their strengths lie in their technical abilities, not their speed. In fact, whatever lineup Spurs cobble together will have its team speed concentrated in the fullback position where Kyle Walker is quite the burner, and Benoit Assou-Ekotto (assuming he starts) while not incredibly fast, is good at getting into attack position. In general then I’d expect Spurs to look something like this. And while the personnel deployed may be up in the air I would expect the offensive roles to be more or less consistent regardless of who occupies them. 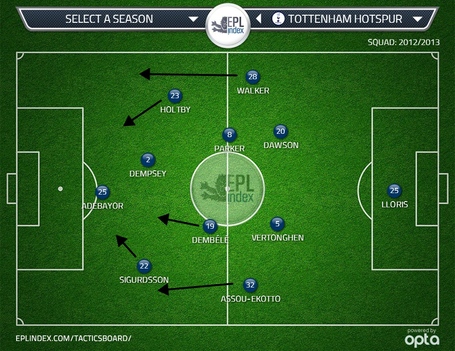 Playing two wide men who are booth looking to drift into the center will certainly make things congested for Spurs, but it might very well also cause Everton significant problems. Without Fellaini and Pienaar, Everton don’t have many players who defensively gravitate towards the center of the pitch from the edges. The one player who does fit that description, Leon Osman, starts there already. In theory this would be a perfect game to stick Osman on the right side of the field and let him do his thing, but in practice that would almost certainly mean Phil Neville returning to the side, and obviously the drawbacks from that far outweigh any possible gains from repositioning Osman.

Given all the uncertainty I expect to see is a very vanilla 4-4-2. Moyes doesn’t like to change sides very much, but I just can’t see any way that playing three central defenders makes sense on Sunday, so while it’s possible that Jagielka moves to right-back and Coleman plays in the midfield, I think it’s more likely that Heitinga just gets dropped and Jagielka moves into the center with Coleman at right-back. That means that somebody needs to come into the midfield. Naismith remains the most likely option, with instructions to stay narrow defensively and help Osman and Gibson. That has the added benefit of giving Coleman lots of room to torture a Tottenham left-back who might find himself isolated from the wide midfielder in front of him. That’s the same team I predicted last week, and it will have to overcome the same creative problems with transitioning from defense to attack that I highlighted then. The difference is that those problems will be less crucial against a team that pressures and plays a high line than against one that sits back and makes you break them down. 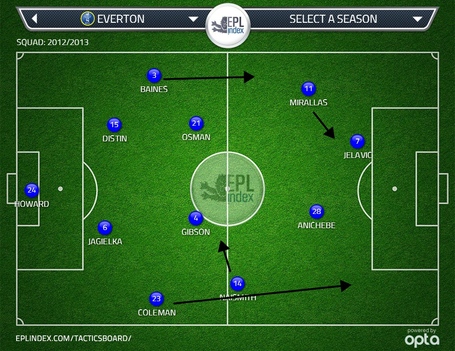 One more team selection point. It feels like this would be a really good matchup for Bryan Oviedo. He’d be a stronger defensive presence against Kyle Walker’s athletic runs and his speed would be an asset against Tottenham’s high line. Still, I’m not exactly dying to give a player their second career Premier League start on the road in Everton’s most important game of the season thus far. But, I could definitely see him being an impact sub to break open a 0-0 tie in the last 20 minutes or so.

Defensively, in addition to Naismith playing slightly more centrally, an extremely high line from Everton’s back four will be necessary to crowd out Spurs in the middle of the field. Without Lennon and Bale Tottenham don’t have the speed to get in behind, and compressing the middle of the field will help mitigate any possible Tottenham numerical advantage. One of Spurs biggest threats will likely be Mousa Dembele driving forward from midfield. He’s become a little Yaya Toure-esque this year for Spurs, with his ability to muscle past a midfield challenge and then run at the defense. Everton need to makes sure a defender is waiting for him when he tries to initiate those runs, which shouldn’t be that hard to do without having any speed merchants to keep an eye on.

Clearly this is not the match all of us expected to see when we circled it on the calendar. Between them the two sides are missing five of their most crucial attacking pieces (counting Defoe for Spurs). That’s likely going to make this a fairly ugly game. But this is Everton we’re talking about, and ugly wins against good opponents are something of a specialty for the club. If they can get another one then the Champion’s League hunt is on.