David Moyes tried something different and played a three man back line. Defensively it worked liked a charm, offensively the results were a little more mixed.

It’s pretty rare that you can reach this time of the season and have something truly new to break down tactically, and David Moyes deciding to switch things up and play three defenders flanked by a couple of wing backs certainly qualifies as new. So, without further ado the pros and cons of a Jagielka, Heitinga, Distin back three.

On the defensive side of the ball I think we can call the decision a complete success. This season Everton’s inability to defend bigger more physical forwards one against one has been the main culprit in several late goal concessions, spanning all the way from their fourth game of the year against Newcastle to the more recent collapse against Norwich. So, in that sense playing an extra man in the back against Stoke’s front two makes sense. Jagielka and Heitinga were able to double team Peter Crouch for most of the game, ensuring that even if he won headers it didn’t lead to easy chances for Stoke. As you can see Heitinga barely had any aerial challenges while Jagielka went up for 13 of them which paints a very clear picture of a game plan which consisted of Jagielka challenging Crouch in the air while Heitinga had the responsibility of containing any knockdowns or flick-ons that Crouch might execute if he won the ball. On the other side of the field Distin was left to contain Cameron Jerome, who operates somewhat less like a target man, and more as a channel runner and finisher. 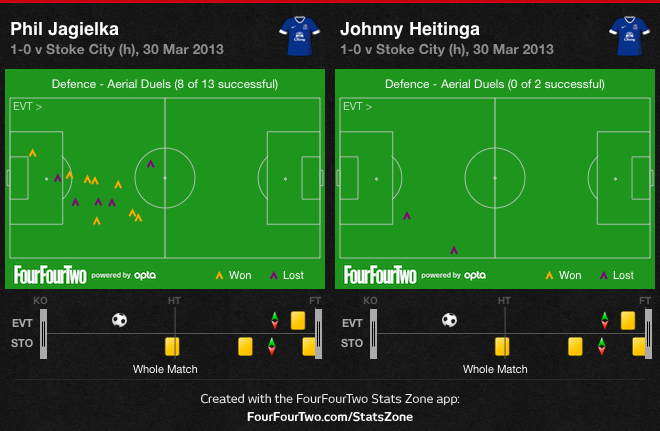 Stoke is always going to create a few chances through set pieces, long throws and the like, but from open play Everton did an excellent job stymying any attack. Although part of the blame has to be placed purely on Stoke’s shoulders. Despite having 22 crosses (of which 19 were from open play) very few of them came from truly dangerous positions deep on the flanks, areas that should have been particularly vulnerable given how advanced Baines and (especially) Coleman were. Marc Wilson in particular was fairly dreadful at playing the ball in. Despite having space to get forward into he wasn’t nearly aggressive enough trying to push deep into Everton territory. Most of his crosses came in from further up the field, and all eight of them were inaccurate. Sure, some of that had to do with three big defenders camped out in the box waiting to attack crosses, but some of that had to do with Wilson’s own shortcomings on the day. Wilson’s a fairly accurate crosser at 21% and has created nine chances in 14 games this year. Those aren’t earth shattering numbers, but they aren’t the numbers of a player you expect to complete zero of eight crosses, and perhaps if he’d taken his opportunities from deeper crossing positions he could have done more damage. 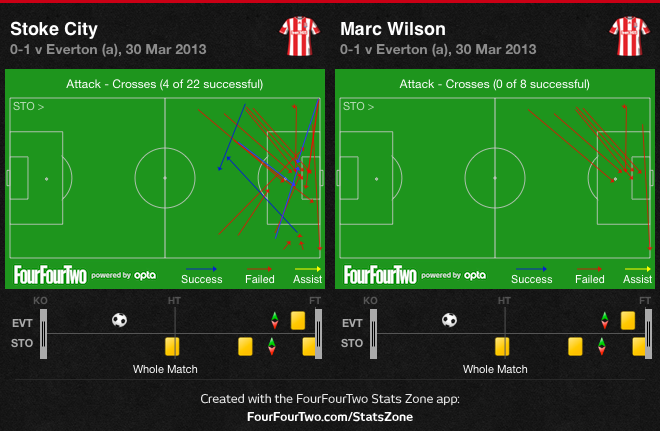 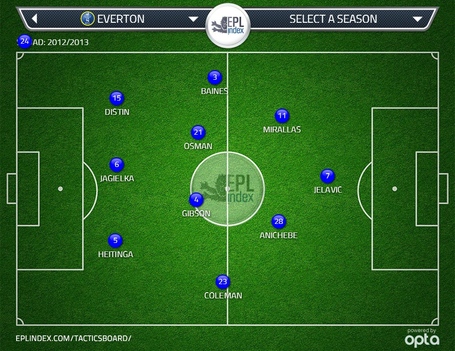 Once they won the ball, however, Anichebe, Mirallas and Jelavic changed shape to form a 3-4-1-2. Mirallas had a free role in to drift towards the wings, while Jelavic ran the channels, and Anichebe dropped between the lines to become a target for long balls. 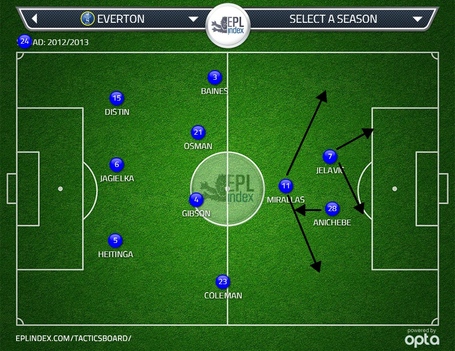 The alignment made for a couple of noticeable changes for the team. First, the wing-backs had nobody directly in front of them to combine with. That seemed to suit Coleman just fine, he loves space to run at people, but Baines’s impact, strangely, seemed to be somewhat minimized. Unlike Coleman, Baines’s impact never truly comes from dribbling past players and on Saturday he didn’t have a single successful take-on. 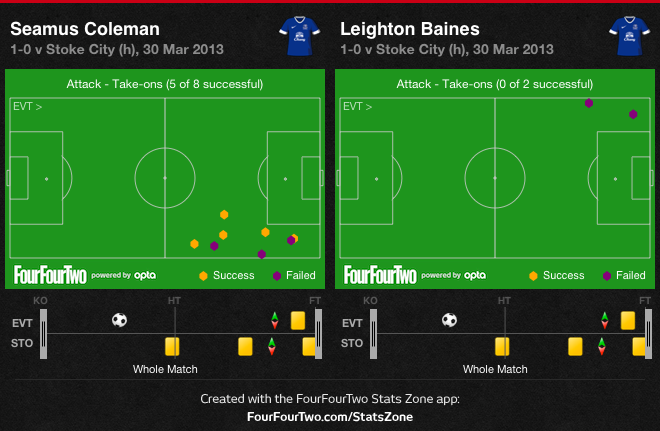 Baines is much more adept at creating space through passing and movement to get himself in position to cross or shoot. Without a player directly in front of him it hampered his ability to create to the best of his abilities. Of course, it’s a testament to just how good Baines is that I’m complaining about the system limiting him and he had four good crossing opportunities and three chances created. 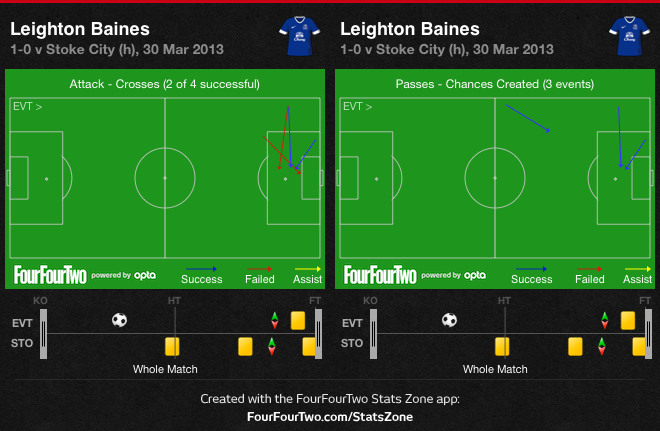 The other thing that hampered the offense is what I’m now calling the Fizzeritis. After the Manchester United game I wrote about how easy it was for United to funnel the ball to Phil Neville at right back, and watch Everton’s attack wither and die at his feet. Then Manchester City tried to do the same thing only Coleman was playing that position and destroyed City’s defense making Mancini look foolish in the process (Coleman it seems is the antidote to Fizzeritis, a role he played to some degree last Saturday as well). Against Stoke, because of the three man defense and because Stoke play compact and don’t press the ball, the role of Fizzer was jointly played by Distin and Heitinga. Stoke was perfectly happy to drop off the two big defenders and let them bring the ball forward and try to initiate the offense. The issue, as you can see below isn’t that their passing was particularly bad; it’s just that it wasn’t particularly incisive. One thing in particular that you’ll notice is very few passes into the center of the field in the final third. 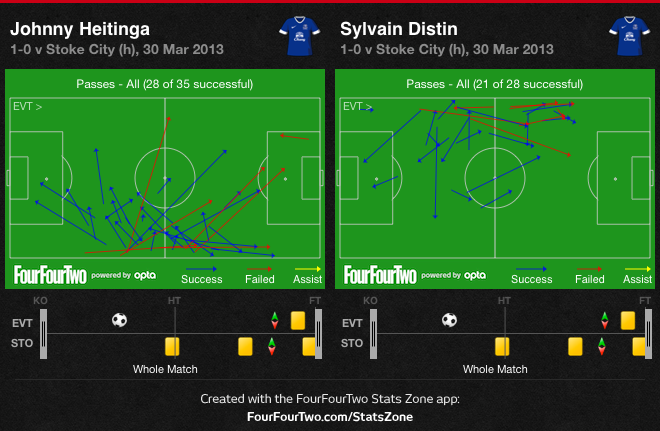 Part of that is attributable to Stoke’s game plan, they want to push the ball out wide and then use their rugged (thuggish) defenders’ height to combat crosses, but Everton needed to be better at thwarting that plan. With three central defenders that duty is going to fall to one of the two outside defenders or to a midfielder who drops exceedingly deep to pick up the ball and create passing angles (obviously Andrea Pirlo at Juventus is the best example of how that approach works). Everton really don’t have those players, so it isn’t a surprise they struggled to generate a dynamic attack.

Nevertheless, given the Mirallas moment of brilliance for the goal and Everton’s ability to kill the game off thanks to a couple of fine moments from Tim Howard, the back three experiment was a huge success on balance. Is it one I want to see every week? No. Do I want to see it next week against Spurs? Well, to get the answer to that question you’ll have to read my tactical preview later this week.