Everton's performance at Arsenal was an old school David Moyes special. It just wasn't quite enough to get the needed results.

Well, that game was a throwback. Hard fouls, getting stuck-in defensively, bending but not breaking, those have all typically been hallmarks of David Moyes sides throughout the years, and they were all qualities on display in abundance against Arsenal. On the other side of the ball, another old Moyes trait reared its ugly head as well, the lack of coherence in attack.

The system Moyes went with was largely similar to the one Everton fielded at Spurs. Fellaini played the defensive midfield role that Heitinga had occupied at White Hart Lane and Pienaar, Barkley and Mirallas played in an ever shifting three man band behind Anichebe up front. Defensively, though, unlike at Spurs where they looked to contain play in front of them, it was clear from minute one that Moyes had given strict instructions not to let Arsenal play the ball through the midfield. The frequency of tackles higher up the pitch, close to the halfway line, is indicative of a team making a concerted attempt not to give their opponents any space. Of course, that strategy also leads to the possibility of letting a speedy winger run in behind. It’s the eternal problem of facing Arsenal, do you condense the space in the middle of the field and risk one of the wingers making you look silly and exploiting space in behind, or do you sit off and let them try to combine and pass their way through. Everton chose option three, the somewhat cynical but widely used strategy of pressing hard, and then fouling speedster Theo Walcott or his substitute Alex Oxlade-Chamberlain whenever they got free. Of the 13 fouls Everton committed, six were on the right wingers. It’s pretty clear from the foul chart the two areas where Everton fouled the most are Arsenal’s right wing, and the deeper lying Arsenal midfield, where a midfielder might turn and play a ball forward in an attempt to exploit the high defensive line. 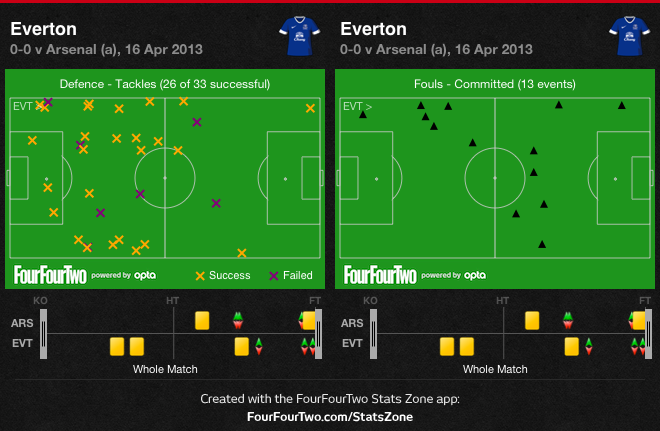 It would be a mistake though to credit Everton’s success solely to cynicism. There was a real true team commitment to making it difficult for Arsenal to do what they wanted. Fellaini was masterful in his deeper lying role, staying disciplined, breaking up play in the middle of the field, and helping to guard the space behind Baines the handful of times the sixth Beatle did manage to get forward. Looking at his action areas it’s easy to seee how steadfastly Fellaini remained deep and protected the back four. And he used his time there well, going 6/7 on tackles and making four interceptions (annoyingly the two different stat websites orient their fields in opposite directions, just another burden we tactics junkies have to live with). 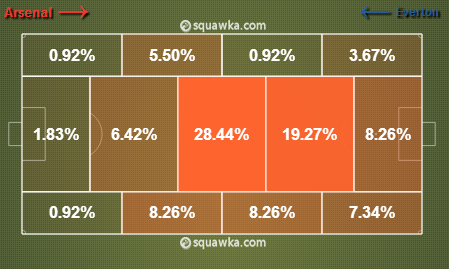 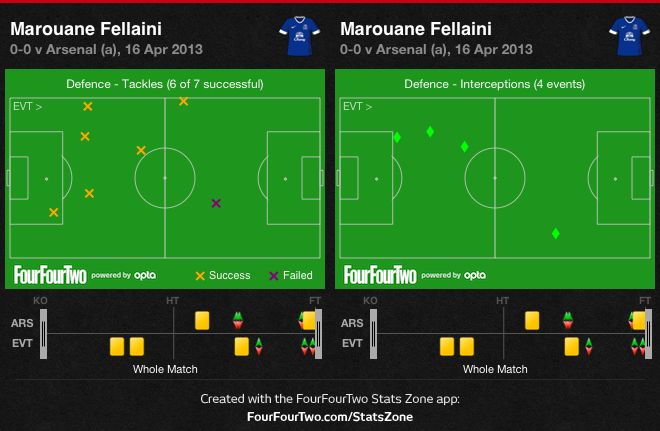 Also Kevin Mirallas deserves a lot of credit. I’ve made a point of calling him out when he seems to abdicate defensive responsibilities (whether dictated by the gameplan, or natural inclination) so it’s only fair that I point out that he spent the entire match being a willing and capable defender tracking back down the right sideline in support. 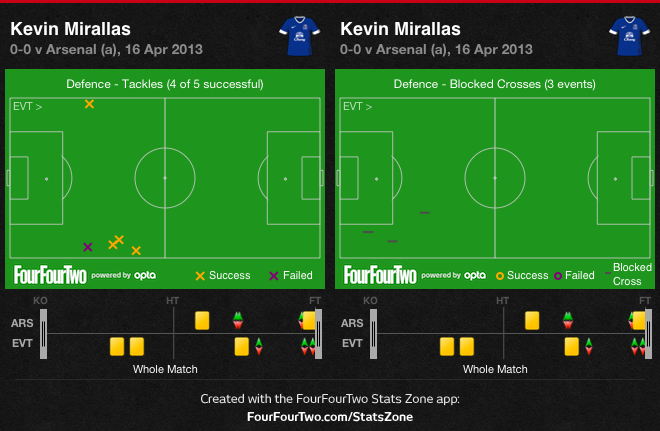 Unfortunately we can’t just talk about the defense, and offensively Everton were more or less stymied. Similarly to Everton, Arsenal played a high defensive line and pressured the ball. Unlike Arsenal though, Everton doesn’t have a Theo Walcott type speedster who can get on the end of through balls. There just isn’t that much team speed on Everton to exploit that space. And Mirallas, clearly the fastest attacking player of the bunch seems to prefer having the ball played into his feet. You can see from his passes received that only once did he really receive a long ball in a dangerous area, and that pass was late in what had become a very stretched game as Everton’s legs tired (it was a really great pass from Gibson, after keeping the ball under two separate challenges on the break he spun and lofted the ball into the box, but a clearly gassed Mirallas took a heavy second touch after controlling allowing the defense to recover and thwarting what might have been Everton’s best chance of the night). What that means is that Mirallas just kept getting the ball at his feet in deeper and deeper positions. And while his skill is undeniable, take-ons in your own defensive third, where half of his were, don’t lead to goals. At best they give a player time to initiate a counter-attack (which in general would require a better passer than Mirallas) and at worst they result in errors leading to dangerous opportunities for the opposition. None, of that’s a knock on Mirallas, he’s a truly talented player, he just isn’t going to stretch the defense. 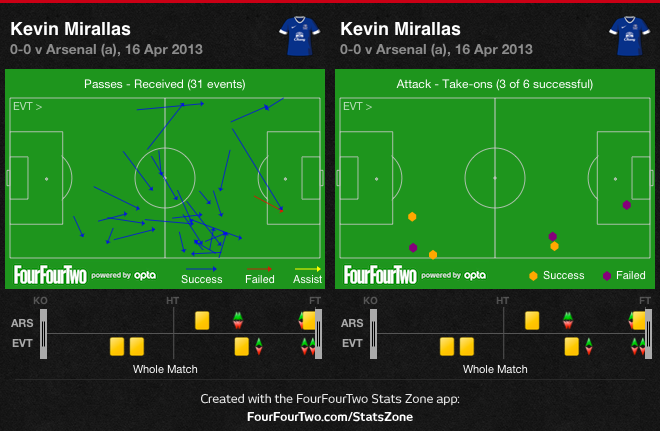 The main route forward for Everton, was supposed to be the hold-up play of Victor Anichebe. But he had an absolute nightmare of a time. There’s a big difference in class between QPR’s central defenders, who Vic absolutely tore apart, and Arsenal’s. Vic, as has been his role recently, played with his back to the goal, and was supposed to receive long balls, both in the air and on the ground, and then bring Pienaar, Barkley, and Mirallas into the play. But, of the 16 duels he was involved in (combing air and ground) he only won six. Amazingly, despite playing the whole game Anichebe completed only five passes, and attempted only nine. Those are both astoundingly low numbers, especially when you take into account his role was supposed to rely on receiving the ball and distributing it out again. Add to that the fact that he didn’t draw a single foul and that left Everton with a huge hole in attack.

Their build-up play desperately missed Fellaini’s presence as a target. That, of course, isn’t Fellaini’s fault, he was busy playing the role of elite defensive midfielder. And that’s the conundrum of Fellaini. He’s two separate above average players, a target man and a defensive midfielder, but you can’t have them both at the same time. On some level Fellaini’s skill set gives the team flexibility, but on another the lack of anybody else on the squad with truly comparable skills at either of the roles he excels at means Moyes is left choosing which part of the field to leave wanting during big games. Against lesser teams it’s not an issue, against Arsenal it clearly was.

Put the offensive and defensive sides of the ball together and what you end up with is a typical David Moyes road performance against a good team -a hard fought defensive 0-0 draw which Everton had a few chances to eke out a victory from, but also barely held onto down the stretch. The fact that the result is a disappointing one says a lot about how well this team has performed this year. There have been lots of ups and downs, but on the whole it’s a lot easier to accept them after a game like they played at the Emirates than after some of the disappointing results earlier this year. The next game they don’t win probably means the end of the Champions League qualification dream, but I’m resolved to enjoying the ride. It’s been a lot more exciting than I think we had any right to expect.