Everton gave a good account of themselves Tuesday night at the Emirates, but it wasn't enough to secure David Moyes's first victory at Arsenal in his eleven years in charge of the club. Still, the draw maintains the status quo and sets up what should be a frenetic finish to the Premier League campaign.

- The day began with a nice moment of silence for the victims of the bombings in Boston on Monday. On behalf of everyone here at Royal Blue Mersey, we'd also like to send our thoughts, prayers, and well wishes to everyone affected by this terrible tragedy.

- Everton started the match positively, putting plenty of pressure on the Arsenal defense even if they didn't always keep possession well. Phil Jagielka created the game's first chance when he picked out Steven Pienaar with a brilliant through ball, but the South African launched the ball over the goal under heavy pressure from Arsenal keeper Wojciech Szczesny. And I just gained a special appreciation for Arsenal bloggers who have to type "Wojciech Szczesny" on a regular basis.

- The game was chippy early on, with several Everton players getting away with challenges in the "grey area." It only seemed like a matter of time until an Everton player found his way into Neil Swarbrick's book, especially with a steady stream of complaints from Arsene Wenger in the referee's ear. Sure enough, Darron Gibson was shown a yellow card for blocking the progress of Theo Walcott, but minutes later he got away with a much rougher foul on the same player. On the balance of play a red card would have been harsh, so overall the referee probably got the decision right. Still, it didn't stop Wenger from criticizing Swarbrick's officiating after the match, though if he thought this was a physical game I can't imagine what he would have said if his team had been involved in that Everton-Stoke game earlier in the season.

- With Marouane Fellaini's days on Merseyside likely numbered, I had to make sure he hadn't already completed a transfer to Arsenal after his woeful clearance set up Kieran Gibbs for a shot that the defender blazed over the bar. It was a moment of madness from Fellaini, whose misplay would have instantly become a contender for blunder of the season had it lead to an Arsenal goal.

- Finally getting the opportunity to play in his preferred position of central midfield, it was time for Ross Barkley to step up today. And though it was far from a perfect performance, for the most part Barkley did exactly that. He was involved in some good stuff near the end of the first half, taking a fairly tame shot that Szczesny caught before setting up Victor Anichebe for a chance that Arsenal had to scramble to clear.

- On the other end of the spectrum, it was a nightmare of a game for Olivier Giroud. He always looked dangerous and was a constant threat to Tim Howard's goal, but I'm hard-pressed to remember a more lengthy highlight reel of misses from a single match. The worst of the bunch looked like it was going to be a carbon copy of Emmanuel Adebayor's goal in the Tottenham game, but Giroud pushed Aaron Ramsey's pass wide of the goal with the entire expanse of the net available to aim at.

- Santi Cazorla tried his luck with a decent effort that Howard pushed aside, temporarily waking up a largely quiet crowd. It was a bit reminiscent of the old Highbury Library today, with plenty of empty red seats visible throughout the match.

- Giroud continued to find new and creative ways to miss the target, first wasting a great opportunity on the counter attack after Leighton Baines shot a free kick and the subsequent rebound into the wall. Later on, Giroud lost out to Seamus Coleman and Sylvain Distin after Alex Oxlade-Chamberlain was perhaps a bit too unselfish. Finally, Giroud completed his evening of misery when Jagielka crowded his shot and forced the ball well over the goalmouth.

- The closest the Blues came to stealing a winner was when Barkley curled a whizzing rocket inches wide of the post, a terrific effort that might have become an iconic Everton moment had Barkley put just a little more bend on the shot. But the first goal of the young phenom's career will have to wait for another day, as this game was destined to end 0-0.

The defense was absolutely immense today and deserves a ton of credit for keeping Arsenal off the scoreboard, particularly in the match's final 15-20 minutes when the home team piled on the pressure. The midfielders and forwards worked equally hard, but they never were able to breach the Arsenal goal.

Five games to go. Three of them are must wins: this Saturday at Sunderland, next Saturday versus Fulham, and May 12th versus West Ham. Then there are the visits to Anfield and Stamford Bridge, two more places where David Moyes has never won. It should be a fun month of football.

Unless Everton loses to Sunderland, of course. Then this month is going to suck. 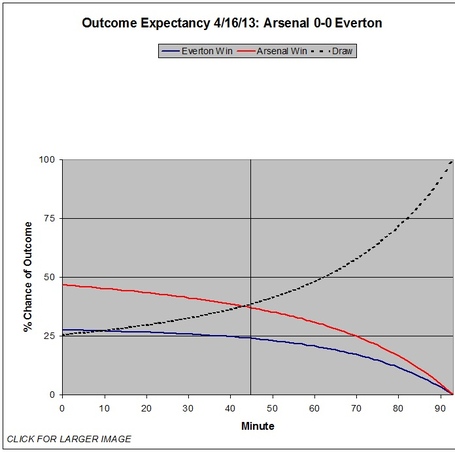