A quick tactical breakdown of why Seamus Coleman is so important to the balance of the Everton attack.

Ok. Two decent performances and maybe we can all step back off the ledge for a second? There’s nothing like a really comfortable victory to let everybody breathe again. Putting aspirations aside, it was nice to actually see the team playing the way they were capable of, even if it was only against lowly Reading. Plus, they scored some goals which gives me some fun stuff to break down.

The main attraction today is Seamus Coleman. He assisted on the first goal, and just ran rampant all day long on the right side. One thing that a little film break down makes apparent is imperative having an attacking right back is to provide balance when team’s overload on Fellaini. Let’s take a look at the buildup to Everton’s first goal. When the long ball comes into Fellaini, there’s a customary double team as a central defender and midfielder try and sandwich the big Belgian. As has also become standard, Reading’s right winger is glued to Baines. That means that a second central midfielder comes over to pick up Gibson (usually that’s Osman but at this particular moment Osman and Gibson had traded midfield roles), leaving the Reading’s left winger to tuck inside and pick up Osman. Coleman, is far from the play, and left completely unmarked 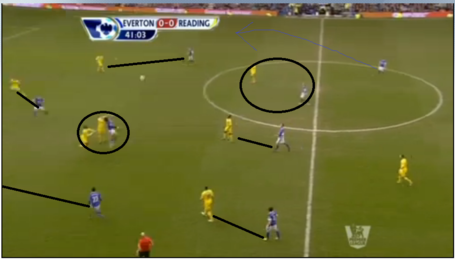 Fellaini doesn’t win the header cleanly, but after the ball ping pongs around a little bit he manages to control it in the middle of the field, and play a simple ball out to Coleman. Look how much space Coleman has to move with the ball in front of him, and as he moves into crossing position it still won’t be a defender picking him up, because the left back his been dragged inside by Mirallas, it’s the left midfielder. Meanwhile, Jelavic, Mirallas and Fellaini all get to storm towards the goal, and Pienaar and Osman get to lurk at the top of the box. That’s five players for Coleman to aim at, and only a winger to try and block the cross. 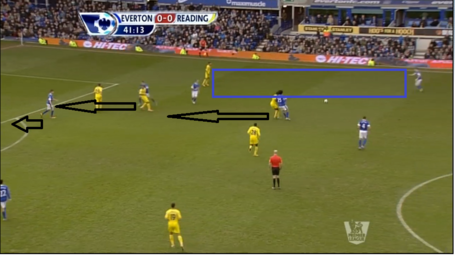 And while this particular attempt led to a goal, it wasn’t an isolated incident. Coleman received 50 passes, and 39 of them were in the attacking half, he also crossed seven times, all from roughly the same spot. We’ve all seen teams get better at defending Everton’s left side this year. The reason is that they’ve just begun to commit more players, and live with the consequences of the right back having a free run into plenty of space if Everton reverse the ball. That’s a really good strategy when Phil Neville is Everton’s right back. It doesn’t work so well against Seamus Coleman.

It’s not that complicated. Obviously if you force opponents to pack the left side of the field then the right side will have lots of open space to work with. Having players with pace and ability to exploit that space is important. Is it enough to turn the tail end of this season around? I have no idea, but clearly it’s a step in the right direction.