So many royal puns, so little time. Stay tuned as we break down Everton's dominating 3-1 victory over Reading.

- Seriously, Mucha has been the court jester for most of his Everton career, but with Tim Howard unable to play with a bad back Mucha was finally given the opportunity to showcase himself in a Premier League game. Hey, it only took three years. Howard's reign of 210 consecutive league starts ended just two shy of the Everton team record.

- The match was only a couple of minutes old when the Blues suffered another injury blow, and the fallen player was another key member of the defense. Adam le Fondre, generally accustomed to coming off the bench for Reading, slid in hard on Phil Jagielka, a dangerous tackle that left a sickening gash on the defender's ankle that cut all the way through to the bone. Jagielka will be forced to go under the knife and will certainly miss the next round of the FA Cup, and likely several more weeks after that. And Adam le Fondre will now forever be known as a villain to the Goodison Park faithful.

- On another note... John Heitinga, this would be a really great time to start playing like you did last year.

- Nikica Jelavic looked determined to end his scoring drought throughout the game, and even though it didn't end up happening I thought he worked himself into some really promising positions. Unfortunately, his finishing was simply woeful, exemplified by a virtually uncontested header in the opening minutes that wound up nowhere near the goal. He then did well to control a long ball hoofed forward from the back, but after working a great move with Steven Pienaar a goal was prevented by a last-ditch effort from Stephen Kelly.

- Meanwhile, Reading managed a couple of half-chances, but they never truly put Mucha on his heels until Le Fondre found a loose ball on a corner kick and whistled a shot off the post. Other than that chance, the Royals generated little in the first half.

- On the other end, the Reading goal was under siege. Marouane Fellaini played a perfectly weighted ball for Leighton Baines to find Pienaar in the box, but another desperate block by a Reading defender kept the Toffees outside the castle walls. Leon Osman lofted the ball forward for Jelavic for another great look, but Stuart Taylor did well to come off his line, cut off the angle, and make the stop. Later, Taylor saved an ambitious yet dangerous effort from Kevin Mirallas.

- In the end, the opening goal didn't require an elaborate setup, but instead was devastating in its simplicity. Seamus Coleman crossed the ball into the box from the right channel, Fellaini headed the ball easily past Taylor, and the score was 1-0. Everton had ruled the first half, and their supremacy was without question going into the halftime break.

- The Toffees continued to storm the castle as play resumed, and a second goal seemed vital if not inevitable. When Pienaar cleverly chipped the ball into the penalty area for Mirallas, the Belgian flashed around the defense and looked destined to score. When the dust had settled, Taylor had added another save to his growing total, but it was only a matter of time before another shot eluded the goalkeeper.

- The teamwork amongst David Moyes's players had been terrific all afternoon, but it was an individual effort that resulted in the second Everton goal. Taking possession of the ball just inside the center stripe, Pienaar dribbled the ball to the edge of the box, went for goal, and watched as his shot rocketed past Taylor and into the top corner. (cue British announcer voice) "WHAT A BEAUUUUTY!!!"

- Speaking of announcers, at some point in this match the commentator I was listening to uttered the phrase, "That shot was a bit of a daisy cutter." I need to work that one into my match reports more often.

- With a goal in the bag for Pienaar, it was time for his opposite number to get one of his own. Having scored against Oldham on Tuesday, Mirallas was no doubt hungry to make it two games in a row with a goal, and he just about had one when his shot missed both the post and an oncoming Fellaini by inches. But just moments later, Pienaar turned provider and threaded a silky pass through the shaky Reading defense for Mirallas, who had timed his run to perfection and made no mistake with the finish.

- At this point, no one would have objected to prematurely crowning Everton as the match's victor, but Reading seemed determined not to give up the throne without a fight. In a mirror image of Fellaini's goal, Ian Harte dribbled down the left-hand side and found Hal Robson-Kanu for a simple headed finish. Moyes will be frustrated that his side failed to keep a clean sheet, but it was too little too late for Reading.

- There were more scoring chances for Everton in this match than courses in a royal feast, and Victor Anichebe (coming off the bench in his return from injury) had one final bite at the cherry before time expired, but his shot was cleared off the line by Harte. The final scoreline of 3-1 could have and maybe should have been much uglier for Brian McDermott's men, but in the end it was still sweet revenge for Everton after losing 2-1 at the Madejski Stadium in November.

No player ratings from me this week, as I admittedly was only able to catch a portion of this match, and think it would be unproductive to attempt to grade the players over the full 90 minutes. I will say that in the highlights and the bits of the game I was able to see, King of the Match was a dead heat between Steven Pienaar and Kevin Mirallas. It's great to see those two finding their form again right when we need it most.

So the Toffees now have a full week to prepare for the visit of Wigan Athletic, a team that just got thumped 4-0 at home by the lot across the park, a defeat worse than the one suffered by Napoleon at Waterloo. With a royal invitation to Wembley Stadium as the prize, this is going to be the biggest match of the season to this point, and I fully expect Goodison Park to be in fine voice. But if we don't win, well... things are going to get very ugly in the Everton Kingdom very quickly. COYB! 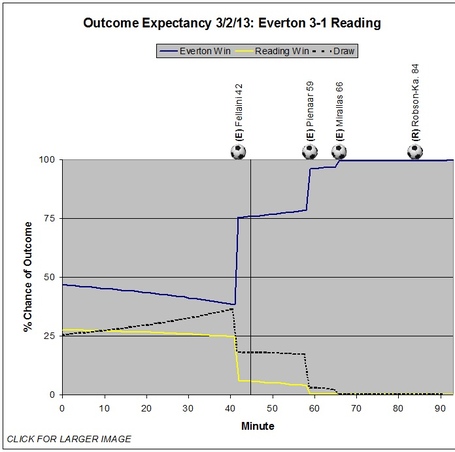 So did you find all 15 royal references? If you didn't, it's okay. Just making it all the way through this match report makes you a winner.