This win has me super stoked!

- Marouane Fellaini and Steven Pienaar were both missing due to suspensions, so David Moyes was forced to juggle his lineup and his formation ahead of today's late kickoff. Everton essentially came out in a 3-4-3 with a back three of John Heitinga, Phil Jagielka (returning early from ankle surgery), and Sylvain Distin. Meanwhile, Leighton Baines and Seamus Coleman were given license to roam up and down the flanks as wing-backs, a setup that I thought was smart and played to both players' strengths (and the strengths of the side as a whole).

- But it was a shaky start for the home team, as a long throw-in from Ryan Shotton caused havoc in front of Tim Howard. The initial glancing header from Robert Huth forced Howard into an excellent lunging save, but the ball was cleared only as far as Jonathan Walters. It looked like Walters would surely score, but from an awkward angle he was only able to bunt the ball of the crossbar. Somehow the match was still scoreless.

- Soon after that, a deflected Everton shot clearly clipped the hand of Marc Wilson in the penalty area, but any reasonable onlooker would agree that there was little the defender could have done about it.

- Without much going on, Kevin Mirallas exploded onto the scene with a spectacular solo effort that opened the scoring. Howard should technically be credited with an assist, as it was his punched cross that Mirallas collected and carried almost the length of the pitch, leaving both Steven N'Zonzi and Geoff Cameron in his wake in the process. Cameron in particular was badly beaten (something we thankfully didn't see at the Azteca the other night), as Mirallas dribbled straight at the defender before swerving and finishing with a hard shot that eluded Asmir Begovic.

- Moments later, Mirallas almost made it two goals in as many minutes, but his shot flashed just wide of the far post. Then it appeared as if Stoke City might have equalized when they actually managed to put the ball in the back of the net, but replays showed that half the team was offside and the goal was rightly negated.

- Each side managed one more shot on target before halftime, but neither Nikica Jelavic's bouncing free kick nor Walters's stinging effort were able to beat the goalkeepers.

- Stoke again came out of the dressing rooms looking like the livelier side, and Huth should have hit the target when he jumped over Distin for a clean header off a corner kick. It wasn't too long after that chance when Everton's defense again failed to clear a cross into the box, allowing Shotton to line up a powerful header that thankfully whistled safely over Howard's goal. The Toffees still led, but their one-goal advantage was hanging by a thread.

- Searching for a second goal to ease some of the tension, Everton started carving out a few chances of their own. Mirallas went for goal again, but his effort was caught comfortably after a block by Ryan Shawcross took all of the power out of the shot. Later, Darron Gibson placed his cross perfectly onto the head of Jelavic at the far post, but with defenders draped around him he also failed to generate any velocity, and Begovic saved easily again.

- Everton came closest to extending their lead when the Potters were whistled for successive fouls on the edge of their own penalty area, leading to an intense discussion among Baines, Jelavic, Mirallas, and Gibson over who would take the free kicks. Baines apparently won the debate and took the first one, went for power, and drove the ball straight into the wall. For the second free kick, Jelavic got his chance and decided to curl his shot, but Begovic managed to fingertip the ball around the post. Not that the referees saw this, as Stoke were awarded a goal kick.

- There was a cool moment toward the end of the match when Ross Barkley (who finally saw some first team action as a late substitute for Mirallas) was whistled for a foul and given a yellow card after a pair of apparently clean tackles. Gibson immediately stood up for the young midfielder and got in an animated argument with referee Mike Jones, which I thought really showcased the unity and togetherness in the team. Incidentally, Stoke flopped around today more than a fish out of water.

- One such example of this was when former Liverpool man Charlie Adam went down right at the end of stoppage time after the lightest of touches by Leon Osman, giving Stoke one final chance to find a tying goal. But the free kick was beaten away, securing the third consecutive league victory for a determined Everton team that continues to hang around in the race for Europe.

Anyone remember the last time Everton won a match 1-0? That would be the memorable 1-0 victory over Manchester United at Goodison Park in the first game of the year. That was over seventh months ago. When Everton last made it into the Champions League back in 2005, they won a grand total of eight 1-0 decisions over the course of the season. I think it's fair to say that continuing to find ways to win tight games like today's will have to be a priority for David Moyes's team as we enter the stretch run.

But this was a good solid result against a stubborn and physical (some might say dirty) team, not to mention a valuable three points to keep Everton within striking distance of the three London clubs directly above them in the table. Also, I give a lot of credit to Moyes for taking some chances by changing his formation and actually using Barkley for once. We often say that matches like this one are the matches that Everton simply must win with regularity if they want to play in Europe, and today they did exactly that. No complaints from me.

Next week's game is going to be huge. 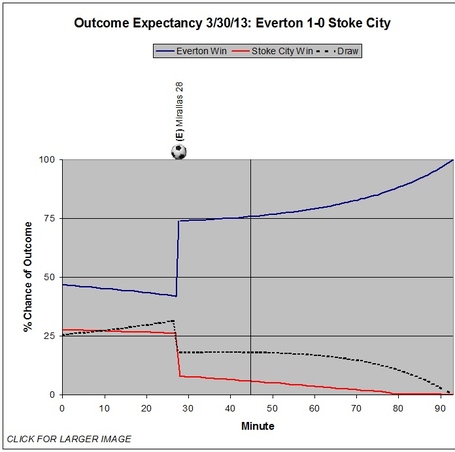