We’re all mired in the becalmed waters of the late season FIFA international break. No news, no games, just the eerie calm before the storm of the run in. But, we do have some tactical talking points to hit ahead of next weekend’s game. The suspension of the back two-thirds of Bainaarlaini means that Moyes is left with a selection question he hasn’t faced all year. Plus, eplindex.com has a fun new tactics board tool that I wanted an excuse to play around with. So, let’s get to the question at hand. Who’s going to play?

I think we can all agree that David Moyes is not exactly the most expansive of managers when it comes to team selections. It’s nice for all of us fans to sit around and pine for Ross Barkley (the magical solution despite not being good enough to get playing time at Leeds) or Shane Duffy in defense (he of the grand total of one minute of first team action this year), or even Bryan Oviedo at inverted winger (where he’s actually appeared a couple of times), but we all know that that’s a fantasy right? We don’t really expect Moyes to make those decisions, it’s just something that we can use to idly pass the hours on twitter yelling and screaming about. There’s a pretty well defined hierarchy of who plays that Moyes sticks to religiously. I don’t actually have a problem with the well-defined roles of the squad, but when you operate that way it’s only natural that fans wonder what if.

The problem though is that given what we’ve seen this year, the prime candidate to play Fellaini’s role when he’s out is Pienaar. The most obvious example I can think of is the game against QPR (the first time Pienaar got suspended) when the team lined up like this. 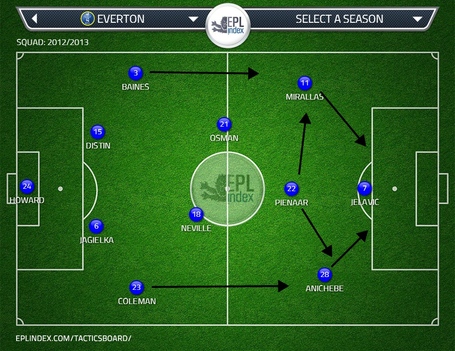 It was an unmitigated disaster, but the point behind it was clear. Pienaar was playing a kind of central winger role, tasked with drifting wide to combine with either Baines and Mirallas or Anichebe and Coleman to create overloads. Pienaar occupied the same role in the first game against Norwich (a 1-1 draw), when Bryan Oviedo got his lone start of the season on the left, and Naismith flanked Pienaar on the right.

Later in the season, when Fellaini missed 3 games due to suspension Moyes opted to shift to a more traditional two forward system with Anichebe and Jelavic partnering to mixed success. At the time Everton were suffering through some extensive injury issues which changed the personnel Moyes had at his disposal. With Coleman out Jagielka and Neville were forced to split time at right back, and with no Mirallas, Osman and Naismith split right wing duties. Still, during that stretch they managed to do what they couldn’t a couple of weeks ago, and beat Wigan at home. Here’s how they lined up for that win. 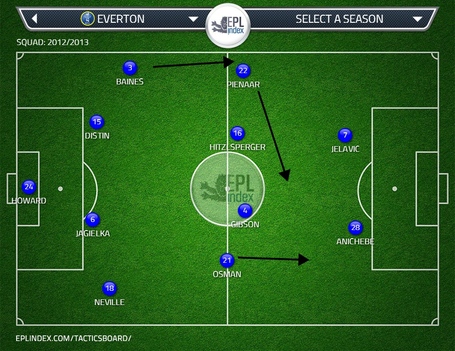 It was an exceedingly flat formation but Pienaar was again responsible for a lot of playmaking roles, albeit from his more comfortable wide position. Despite starting out wide, Pienaar was largely tasked with coming infield and moving the team from defense to attack. When Fellaini isn’t around to operate as the hub to transition through, Pienaar is asked to fill that role.

With no Pienaar then where does that leave us? Well, I think it’s a pretty safe bet that given Jelavic’s late goal against City, and Anichebe’s recent form, they will both be in the side. Where Anichebe plays will probably be determined by who replaces Pienaar. There are three options Oviedo, Neville and Naismith, and each one will tell us something about how Moyes intends the team to play. I’ll start with the least likely and move from there. Oviedo would lineup on the left, but unlike Pienaar, he’d stay quite wide, and give Baines room to cut inside him. If he starts I’d expect Anichebe to be asked to play a Fellaini like role, of controlling long balls from defenders and initiating the offense. It’s not clear to me that that role really fits Anichebe’s skill set. 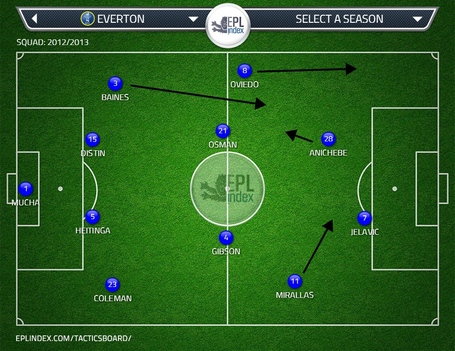 Somewhat more likely is that Moyes brings Phil Neville into the side and pushes Osman higher up the field. You won’t have to watch the game to know if the manager goes this route, just listen for anguished howls and garment rending from the blue half of Liverpool. You should be able to hear it worldwide. This choice would echo Moyes’s decision against QPR early in the year, forcing Anichebe out right with Mirallas cutting in from the left. 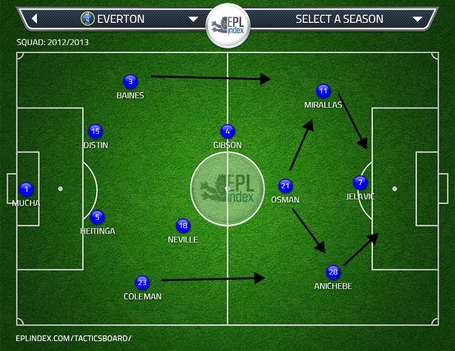 Finally, the option I think is most realistic is that Naismith comes into the side. From a depth chart perspective he’s certainly the next man up in the wing position. That would most likely mean a traditional flat 4-4-2, but there are real questions about who would shoulder transitions in this setup. Mirallas will certainly look to cut in from the wing, but he’s much more single minded in going for goal than Pienaar, who combines well with the rest of the attack. It’s also unclear to me whether Mirallas will be able to find the space he needs with two traditional strikers sitting ahead of him and Naismith not providing any width on the opposite flank. 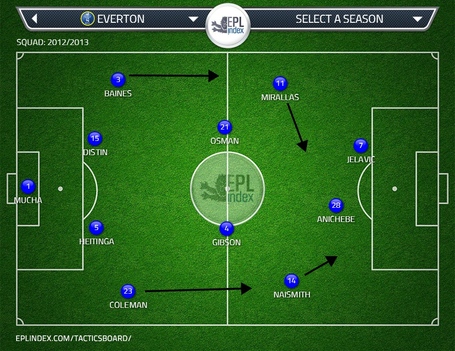 One other thing that Moyes has to take into consideration is that neither Mirallas nor Naismith has gone the full 90 minutes in a game in a long time. Starting them both means either hoping one of them lasts or really handcuffing your substation options. I’m not sure how big a role that will play in the decision making process, but it’s just another example of how imperfect all of the options are. In these situations Moyes usually just defaults to whoever the next guy in the depth chart is, and just game plans around whatever deficiencies that person brings. Hopefully he views Naismith as that guy, because at this point I’m not sure how you manage around the gulf that Phil Neville has become.

Honestly though, this team needs to be good enough to beat Stoke at home no matter who Moyes picks to start. Anything other than three points is a devastatingly bad result. If Everton is a squad talented enough to be deserving of Europe than any one of these three lineups needs to be good enough to win. Against better competition differing personnel choices might be the difference between three points and none. But, this is Stoke. Whoever's out there should be enough to take care of business.