Kolarov might have had a nightmare of a game, but it was Roberto Mancini's tactics that put him in a position to fail, and fail, and fail and....

What a difference a week makes. Honestly I don’t want to think too much about this game, I’m still afraid that it might be some sort of fever dream. I will say this though. All of us should send a big fat thank you card Roberto Mancini. We all saw poor Aleksander Kolarov get torched so badly by Seamus Coleman that I’m sure he spent St Patrick’s Day having Vietnam style flashbacks. After breaking it down a little though I really wanted to hug him Robin Williams in Good Will Hunting style and just repeat, "Its not your fault" over and over and over again. He’ll take the blame, but it was all the coach’s fault.

A lot was made of City’s decision to play three at the back. Really all that shows is that we’re all way to hung up on the number representational system. Calling Pablo Zabaleta a central defender, and Kolarov a left midfielder is just dumb. If you compare their action areas for the first hour of the game (after a red card everything changes obviously so all the stats I use today will be from the 11v11 portion of the game), which I took from the great stat website Squaka.com, you can see what looks like two traditional fullbacks. Sure, Kolarov gets forward on the overlap a little more, and Zabaleta tucks inside on defense more frequently, but they both spend the majority of the time, spread out wide near the midfield line. 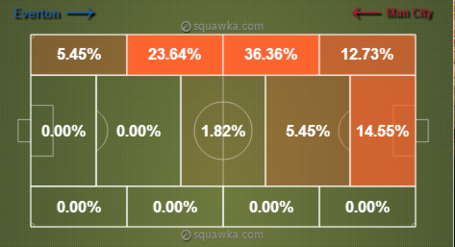 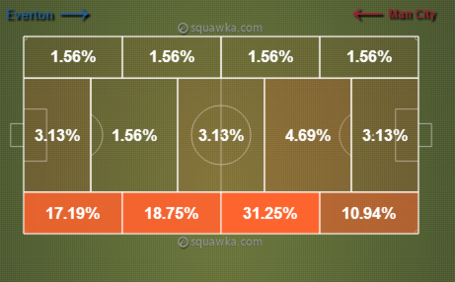 The reason Zabaleta seems to tuck inside to more central defensive positions was that he had James Milner in front of him as a right midfielder. Milner’s main job, like every other right midfielder who plays against Everton, was to track Leighton Baines, which meant dropping deep into the corner and letting Zabaleta tuck inside him. Kolarov on the other hand received literally no help. In theory one of three things needed to happen for City to effectively defend their left flank. We’ll look at them one by one.

First, Carlos Tevez could drop deep and protect Kolarov, which was so unlikely as to be laughable, and obviously never happened. Tevez, was stationed high up the field, which is where he was going to stay anyway, even if the gameplan called for him to drop deeper. 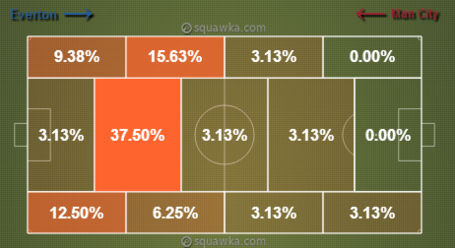 The second option, and the one that would have happened in a true back three, is Matija Nastasic’s covering behind Kolarov. But, Nastasic spent next to no time in the left defensive corner. While the action area does pick up Nastasic being on the left wing what its showing is Nastasic’s offensive positioning, which you can tell by looking at his passing chart. 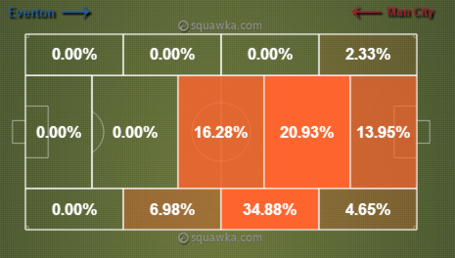 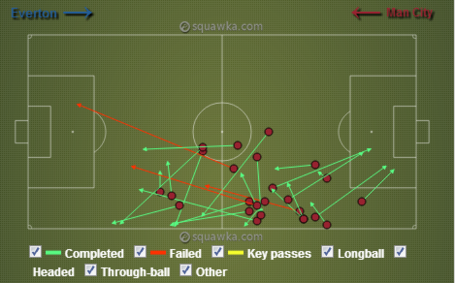 Nastasic defended like he was part of a back four. It isn’t like he got out into wide areas and was exposed. He just never went into the corner behind Kolarov which is why I think defending that part of the field probably wasn’t supposed to be his responsibility.

More likely, it was the third option, Gareth Barry, who was supposed to play as a kind of hybrid central/left defensive midfield role. You can see from his action areas, and even more clearly his heat map, that he did spend some time defending the sideline(ish) area. 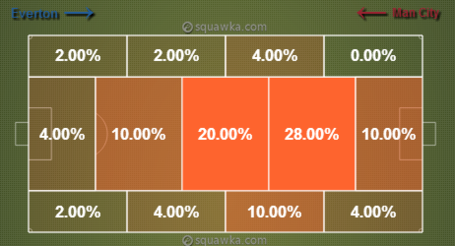 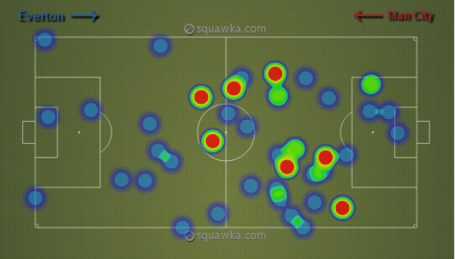 The main problem is that Barry is simply not athletic enough to shuttle from the middle of the field to the sideline when Everton swung the ball from their left to right. Coleman found the most room when the ball started on the left, and was swung through the midfield, forcing Barry to pick up Gibson or Osman, before coming to Coleman unmarked. He then had all day to run at Kolarov in space, with Mirallas ahead of him. That’s a recipe for disaster for any defender.

The gameplan seemed like it was designed for facing a team with Phil Neville at right back. Teams have been very successful this year funneling the ball to an unmarked Neville and then watching Everton attacks grind to a halt. Manchester United comes to mind as a team that did that exceptionally well. But with Coleman back there, obviously the approach doesn’t work. Also, City’s lack of Yaya Toure probably made it much harder to effectively defend the midfield. Toure’s so much more physically gifted than Barry that he would have had an easier time covering all the ground Barry was asked to (or maybe holding down the midfield on his own while Javi Garcia played the shuttled in and out). Regardless, the fault has to lie on Mancini for getting his defensive tactics completely wrong and putting his players in a position to fail.

So on behalf of Evertonians everywhere, thanks Roberto we all needed that.