I'll give this match one thing: for the last twenty minutes I think I was as far on the edge of my seat as I've been at any point since the season opener versus Manchester United. But while it was a thrilling, enthralling encounter that looked doomed to be a total disaster at one time, Everton will still be concerned that they could only muster a point at home to a team struggling to keep its head above water. And there was clearly one player who was most to blame.

- When playing a team that is low on confidence, the absolute last thing you want to do is gift them a confidence booster early in the match. Unfortunately, thanks to some awful defending by John Heitinga that is exactly what Everton did. Christian Benteke took control of the ball with plenty of work to do, but considering his pace Heitinga was probably marking him far too closely. Indeed, Benteke left Heitinga in the dust with ease and finished neatly into the inside corner of the goal for a priceless 1-0 lead.

- After opening the scoring, Aston Villa made their intentions perfectly well known as Brad Guzan took his sweet time to take a goal kick. If time wasting in the 15th minute wasn't bad enough, Andreas Weimann came somewhat close to making it two on a header at the near post off a corner kick. Marouane Fellaini was the first to threaten Guzan's goal when he dragged his shot wide without much room to operate.

- But Aston Villa has the worst defensive record in the Premier League for a reason, and Victor Anichebe (starting again in place of Nikica Jelavic) emphasized that dubious distinction when he abused his marker, backing down Ciaran Clark and using his strength to turn and fire home an equalizer. It's been awesome to see Anichebe finally step up and start to establish himself as a legitimate attacking threat recently, and I think the reason he's been able to do it is a newly found refusal to go to ground.

- It seemed like Everton would probably go on to take care of business from this point, much like in the Southampton game earlier in the year when they fell behind early but went on to win comfortably. However, everyone who thought that wasn't counting on further blunders by Heitinga. The first mistake he made was to carelessly play Benteke onside, though he did well to get back and force the ball out for a corner kick. However, he cancelled out that contribution by completely losing Gabriel Agbonlahor moments later, allowing him to glide into the heart of the penalty area untouched for a terrific header that made it 2-1 to Villa.

- It should have been 3-1 just minutes after the restart as the visitors put together a terrific passing sequence that saw Agbonlahor set up a breakaway for Wiemann, who had done magnificently to stay onside after Leighton Baines badly misjudged the play. With both corners to aim at or the option to dribble around Tim Howard (who had come out of his goal to meet the onrushing Wiemann), the striker instead shot harmlessly over the target to the relief of the Everton fans.

- Meanwhile, Everton players seemed to be dropping like flies all over the pitch. First it was Fellaini who hit the ground hard while trying to reach a free kick by Baines, then it was Anichebe who went down awkwardly while attempting to distract Guzan into making a bad clearance. Jelavic began to warm on the sideline, but both players ultimately remained in the game.

- Then Villa really did make it 3-1, thanks to a pretty finish by the spectacular Benteke and another stop on Johnny Heitinga's Excellent Adventure. Matthew Lowton was allowed to send a cross into the box, at which point Benteke blew by the listless Heitinga to nod the ball past Howard for a two-goal cushion. It was the last straw for the Dutchman, who was subbed off soon after the third goal to a smattering of boos.

- Jelavic and Bryan Oviedo entered the match with 25 minutes left as Moyes threw all caution to the winds, and Everton methodically began the slow fightback. The first step was to cut the deficit to a single goal, and Fellaini was the provider as he powered a low shot through a maze of defenders and past the outstretched Guzan to make it 3-2. Once again Anichebe was involved, holding the ball up brilliantly in the box before laying it off for Fellaini to finish. The noise around Goodison Park grew to a fever pitch as the supporters anticipated a famous comeback.

- At this point it was all Everton, as Aston Villa desperately clung to their lead (I can't imagine what was going through Paul Lambert's mind for the final twenty minutes). The substitute Oviedo tried his luck, but his shot flashed wide of the post. Then the other substitute Jelavic had an even better chance to tie the game, but his shot was saved well by Guzan after the keeper had tipped the initial cross out of harm's way.

- Because of injury delays, goal celebrations, and a flurry of substitutions, six minutes of stoppage time were added on to the end of the match to the intense frustration of the Villans. In what almost seemed like an inevitability, Fellaini rescued a point for Everton when he was somehow allowed a free header off a corner kick to power the ball cleanly past Guzan and into the goal. Goodison Park went absolutely crazy, while Villa could not believe that they had thrown away two precious points in their bid to avoid the drop. But it wasn't over yet.

- With three minutes or so still left on the clock, Everton kept pushing as they searched for an unlikely winner. And for a second it looked like they had it when Fellaini met a cross with a sizzling one-time effort, but the shot was parried away from danger by the busy Guzan. It was to be the last chance of the game, and the whistle blew to signal the end of a 3-3 classic that probably left both teams unsatisfied.

The team showed today that they haven't lost the fight and spirit like some feared they might after a disappointing transfer deadline day, but the first part of this match can't be overlooked. Defense is the number one concern right now, but David Moyes didn't help matters yesterday.

Unless Phil Neville is nursing an undisclosed injury, it absolutely baffles me why Moyes didn't play him at right back and pair Phil Jagielka with Sylvain Distin. This shouldn't have been a tough choice, and in fact it was fairly obvious to most of the fans I saw on Twitter and on here even before the three goals went in. It also seems unlike Moyes to bench his captain when the game seems to so clearly call for his inclusion. I'm eager to hear Mike's take on it, because I'm at a loss.

As for Heitinga, I don't know what to do with him anymore. He's better than this, but he also seems to have lost all confidence and he's costing us points. Surely he will return to the bench for the visit to Old Trafford next Sunday. 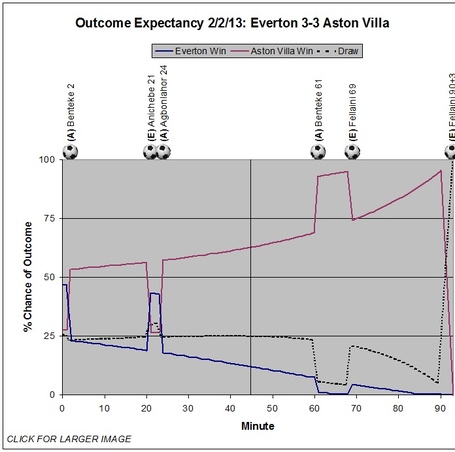