That sound you just heard was the thud of Everton's Champions League dreams collapsing.

- During the week, David Moyes called on Kevin Mirallas to take his game to the next level for the stretch run, emphasizing the Belgian's importance in Everton's quest to qualify for Europe. So when Steven Naismith was strangely listed as the starter on the right wing for Saturday's match, plenty of fans were taken aback. But Naismith and his teammates looked energetic enough (as did their opponents) in the early going, with both teams pushing the tempo and trying to make things happen.

- However, the defense left far too much space unattended when Robert Snodgrass sashayed into the box with plenty of room, and he looked set to test Tim Howard until Sylvain Distin slid in with a terrific block. A great recovery that might have prevented the Canaries from taking an early lead.

- Seamus Coleman and Nikica Jelavic were probably the most lively Everton players in the first half, and they both managed to test keeper Mark Bunn early on. Making his first appearance in a month after suffering a thigh injury, Coleman unleashed a shot (cross?) from the right that Bunn parried away from danger. Then Jelavic had an even better chance to score; absorbing a long pass with his chest, Jelavic found himself in close quarters with Bunn and wasn't quite able to find a way around the keeper.

- Marouane Fellaini then got his knee sliced open by Bradley Johnson, but when the obviously bad challenge went unpunished Fellaini responded by hauling down Johnson in frustration. No one ended up in the referee's book, however. Soon after that Fellaini launched an ambitious shot way over the goal.

- Norwich was still being allowed too much space down the middle, especially when a swarm of three or four Everton defenders couldn't prevent Grant Holt from dribbling into the area and getting off a solid shot. Thankfully, Howard was able to catch and hold the ball to nix the opportunity.

- The game looked set to head into halftime with a fair 0-0 scoreline, but an inconspicuous buildup led to Everton snatching a 1-0 lead with five minutes to go. Fellaini did well to maneuver the ball into a spot for Leighton Baines to get off a trademark cross, and Baines didn't hesitate, finding Leon Osman for a crouching header that he directed past Bunn. Looking at the replay, it was a more difficult finish than it first appeared, so full credit to the smallest man on the field for a great headed goal.

- Everton looked comfortable as the match resumed, but the game changed in the 58th minute when Chris Hughton introduced Kei Kamara (formerly of the MLS) for the ineffective Luciano Becchio. Kamara is someone I have watched countless times in the past, and while he's always been a solid player in MLS he's not really a guy I feared entering a game like this. But Kamara does have pace and it clearly caused problems for Everton's defense.

- First, Kamara tried a difficult overhead shot that Howard had to be alert to catch with Wes Hoolahan lurking nearby. Then he managed to get on the end of a lofted cross from Hoolahan, but his fadeaway header just missed the far post. There were a few shouts for a penalty (mostly from Kamara himself), but even though those appeals were denied it was growing increasingly important for Everton to find the dagger goal.

- And they nearly had it when a corner kick produced a great chance for Darron Gibson, but ultimately he was unable to keep his shot down to the required height. Honestly, I think it was at this point that the game was really lost. There was way too much sideways passing by Everton and not nearly enough ambition to get forward and get the second goal, and it was going to cost them in short order.

- Mirallas was subbed into the game for Jelavic as Moyes attempted to kill off the match, but moments later Norwich had a gut punch of an equalizer. Coleman's defending will be questioned after he lost his man which led to the initial corner kick, but Fellaini is the real goat for some absolutely horrific marking on Kamara in the box. It was a clever run by Kamara as he used the sea of bodies to essentially set a pick for himself before heading the ball powerfully into the net, but Fellaini's miscue was inexcusable at such an important point in the match.

- There were still five minutes plus stoppage time remaining, but all Everton got off in that time was a weak effort from Mirallas that was easily caught. On the other end, the Canaries were showing more confidence and more desire to steal all three points, and Holt almost found an opening before Distin slid in with another great block. But in the depths of stoppage time, with virtually the last kick of the game, Kamara and Sebastien Bassong won a long ball into the box and Holt scooped up the leftovers and scored to win it. Unbelievable.

So yeah. A heartbreaking loss, and one that likely ends any chance of Everton qualifying for the Champions League, considering the schedule that is looming. Really though, just making the Europa League should be the primary goal in the league now, though the FA Cup replay with Oldham provides a welcome distraction on Tuesday.

A comfortable win would be nice, but considering the Toffees' form at the moment I foresee a tight 2-1 type of scoreline, maybe even with extra time thrown in for additional fun. Teams go through rough patches, but something stinks right now and it's hard not to point to the lack of signings on January 31 as a turning point. Mr. Moyes, this is where you earn your money, good sir. I'd suggest stapling Naismith to the bench, myself. 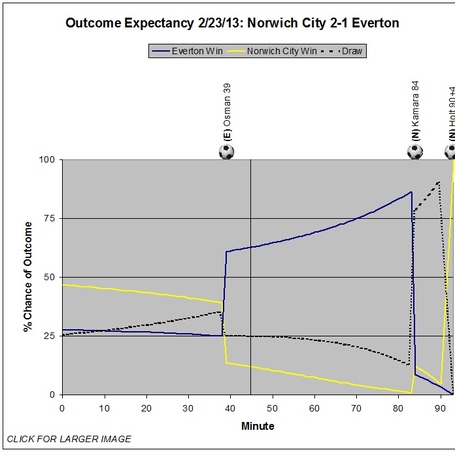