Whelp. That was pretty much the opposite of stepping up your game in a big spot. The team no-showed on both sides of the ball. Since I’ve been saying for weeks now that I’m going to focus more on defense, and there was no Everton offense to speak of this seems like a pretty good time to do it. Let’s grit our teeth and get through this thing.

First, I think it pays to take a quick second to break down exactly how Manchester United stifled the Everton attack. It was a disturbingly easy two-step process. First, Phil Jones shadowed Fellaini all over the field. The combination of Jones, and a central defender was enough to keep Fellaini from setting up shop to receive and control long balls. And when he dropped deeper to get away from a defender and drag Jones into space he was simply ineffective. Second, Antonio Valencia shadowed Baines. The winger’s instructions were clearly to stay glued to the right side and make sure Baines was never able to overlap and create 2 v 1 situations. That worked too. Usually when faced with a right winger who is basically playing as a second full back, Moyes gives Pienaar the freedom to roam inside, using Baines as a decoy to occupy two players while letting Pienaar overload central areas. He tried that this game too, but for reasons I’ll get to later Manchester United were waiting for that eventuality. Regardless, that was the whole defensive gameplan, man mark Everton’s two best players out of the game and let somebody else beat you. Nobody else could.

Everton’s defensive woes will take a little longer to examine. Let’s start with the first goal. I’ve brought visual aids. Please excuse some blurriness, and my horrible mouse drawing penmanship. We work with the tools we have. Anyway, in the first picture you can see the ball in the air being played to Valencia on the right wing, who is just out of the picture. In the way upper left hand corner I have helpfully circled Phil Neville. He is doing an excellent job guarding the right side of the field against the aliens and the mole people, but he is certainly not defending against Manchester United, since there is not a single red blob anywhere near him. In fact United left winger Ryan Giggs has been picked up by Jagielka (I helpfully circled him too). 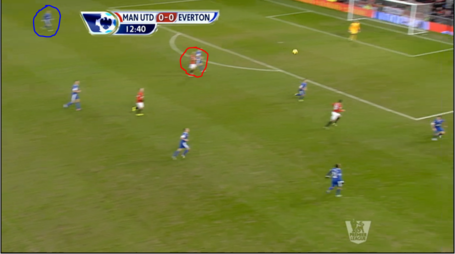 Now, we all know what happens next. Valencia wins a header against Baines in the corner, which should be no big deal, but Heitinga just gets absolutely schooled by Robin van Persie. Heitinga’s been dreadful this year, and clearly he is the first person responsible for the goal, but he certainly isn’t the only one. After RVP gets goal side, Jagielka (circled) comes over to cover, which is what’s supposed to happen. But, as you can see from all of my shakily drawn arrows, nobody else is doing their job. Neville who should be rotating onto Giggs (or maybe should have tracked him into the middle in the first place given that left back Evra hasn’t come forward) is so far out of position he isn’t even on the screen and I just had to draw the arrow from the edge of the picture. And just as bad, Osman hasn’t tracked Rooney, and is standing staring at another wide open player heading into the penalty area. This is bad bad bad execution, and it’s not just on Heitinga. Giggs scored, but it could just as easily have been Rooney.

From 1-0 down, Everton tried to make a game of it. They did a decent job exerting pressure and throwing men forward, but when they gave up the ball, it was a disaster. Just minutes before the second goal, Phil Jones poked the ball away from Fellaini, resulting in this situation. 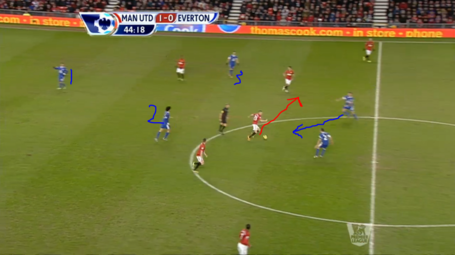 The first thing to notice is the 3 Everton players caught behind the ball (plus Anichebe further up field). Piennar (1) had just finished making a cross field run, Fellaini (2) is tracking back having just had the ball tackled, and Mirallas (3) in his right midfield position is casually walking back. Meanwhile United have 5 midfielders streaming forward. The reason there are 5 of them is that after the first goal Giggs tucked into the center of the field as a third central midfielder and Rooney dropped into the left midfield slot. Remember when I said there was a reason Pienaar wasn’t able to create 3 v 2 in the middle of the field? United’s extra midfielder is one reason why. So now to make matters worse, Osman makes a poor decision and closes down Cleverly (blue arrow). Cleverly makes a relatively simple pass (red arrow) to Giggs, which leaves the old Welshman a completely free look at playing a through ball to RVP (who is not pictured but is playing off the shoulders of the two central defenders). This time, RVP left a split second early and got flagged offside.

But less than a minute later the same thing happened again. This time, United’s right back, Raphael nicked the ball of Pienaar in the middle of the field. With Valencia stuck to Baines, Raphael had the freedom to track Pienaar inside, which was the second reason the South African wasn’t able to create mismatches against United. With Pienaar inside, and Baines up-field Osman is left to cover at left back, and track the run of Cleverly (you can just barely see Cleverly’s head at the bottom of the picture, and I marked Osman’s route with the arrow). That leaves Gibson (circled) isolated in the middle of the field against three United players. Oh, and at the top of the screen you can once again see Mirallas making very little effort to get into the play. Some of the names and positions are changed, but it’s basically a carbon copy of the previous situation. Everton are dragged all out of shape, United have a numbers advantage in the middle of the field, and Mirallas isn’t interested in helping to make up the difference. 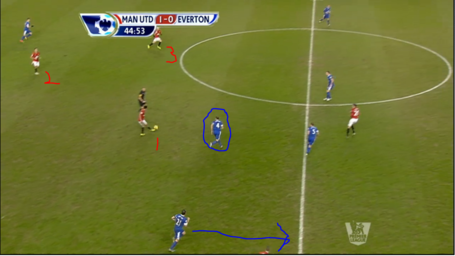 It’s no surprise then that even though Baines busts his ass to get back down field it’s too little too late, Osman doesn’t really mark anybody anyway and Raphael gets a completely free look at threading a pass through to RVP. Of course, as the picture shows, Neville also muffs the off-side trap, but that’s almost beside the point. If you give an opponent enough free, unpressured chances at beating the trap one time or another they’ll catch a defender. That’s not to excuse Neville, but as with Heitinga, on the first goal, just because he made the immediate mistake doesn’t mean he wasn’t also let down by his teammates. 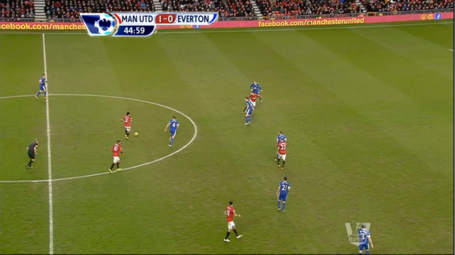 Everton just got this one all wrong. I’m not telling you anything you don’t already know by saying that Neville is really hurting the team and Heitinga isn’t doing much better. This week though Mirallas’s disinterest in tracking back (especially when Rooney/Giggs were cutting inside giving United a man advantage) and Osman’s ineffective defense were unsung goats as well. Oh well, onto Oldham and maybe some F.A. Cup to cheer us up.

P.S. Let me know in the comments if you liked the telestrator work, or if you find the normal passing charts more interesting.