I hate so much about the things this match chose to be.

- Obviously, this was always going to be a supremely difficult game for Everton, and it didn't help that there were bad vibes even before the match began. Sylvain Distin was a last second scratch due to illness, meaning that whipping boy John Heitinga was picked again to anchor the back four. The feeling of unease continued into the match's early exchanges, with the Red Devils dominating the possession and the Everton players looking nervy as they struggled to scramble the ball away from danger.

- Robin van Persie completely outclassed the Everton defense for most of the afternoon, though he should have tallied a relatively simple goal early on. Heitinga and Leighton Baines lost Van Persie completely as he did well to stay onside and dribble the ball around Tim Howard, but with the yawning net to aim at he could only strike the woodwork. The Toffees were let off the hook for the moment, but the trouble had only just begun.

- It was only a couple of minutes before United had the lead for good, as this time Van Persie turned provider to set up the ageless Ryan Giggs in the middle of the 18-yard box. Giggs eluded Jagielka and coolly finished off the inside of the post and in, his first goal of the campaign ensuring that his remarkable run of scoring in every Premier League season would continue on for another year. It was more atrocious defending by Everton, as once again Baines and Heitinga were helpless to impede Van Persie's progress.

- There was a window of opportunity for Everton to get back into the game as United eased up on the gas a bit after scoring the opening goal, but the Blues still struggled to create any truly threatening chances. Leon Osman took a shot on the half volley from outside the area that appeared promising, but David de Gea was able to parry the ball away. Then Kevin Mirallas found some space down the right with Victor Anichebe to aim at in front of goal, but the pass was just a tad behind the Nigerian, who couldn't quite make the turn.

- While a 1-0 deficit at halftime would have been challenging enough for Everton to overcome, disaster struck in first half stoppage time when the home side added a second goal. To the surprise of no one, it was Van Persie who was the goalscorer, finally getting his name onto the score sheet after a terrific 45 minutes of work. It's a rare goal that leaves three opposing players looking significantly foolish, but after Phil Neville played Van Persie onside, Howard again allowed Van Persie to dribble around him after coming out of his goal, and Heitinga failed to clear the shot off the line, all three players aren't going to be particularly eager to see a replay of this one.

- Honestly, the second half was a total snoozefest. You never really fancied Everton to mount a comeback, and the Red Devils were indeed allowed to essentially coast to the finish line. Alex Ferguson will be happy as his team has a key Champions League fixture with Real Madrid midweek, but David Moyes will be frustrated that his players never found any sort of rhythm.

- Anichebe was replaced by Nikica Jelavic about ten minutes after the restart, a move that was likely both tactical and forced due to Anichebe taking a beating throughout the game. However, I thought this was a rather poor showing by Anichebe overall, as he fell back into some of his old habits. Too often his primary objective seemed to be eliciting the referee to blow his whistle, while actually getting a shot off seemed to be a secondary concern.

- The best chance for Manchester United to add to their lead was a ridiculous corner kick sequence in which Jonny Evans had three chances from pointblank range denied. Howard did very well to stop Evans's first two efforts, while the third was saved brilliantly off the line by Jelavic. Moments later, Howard was called into action again to tip a firecracker from Tom Cleverley over the bar.

- Really, there wasn't much else to report the rest of the way, and I'm tired of talking about this game in any case. Steven Naismith replaced Mirallas with about twenty minutes left and actually looked decent I thought, and later Jelavic managed a shot on target that was saved by De Gea. Other than that, United had it easy as they saw their lead atop the Premier League table balloon to twelve points.

I'm not going to be one of those reactionary fans and declare the Champions League a lost cause, but there's no doubt that looks like a minor long shot now. The real scrap might be just to get into the Europa League, which is going to require at least a sixth place finish.

Really, I just wish that Everton had given a little better account of themselves today. In particular, the second half had an air of give up around it that you just don't typically see with a David Moyes team. I decided to give Darron Gibson the Man of the Match even though that's not really saying a lot given the overall performance of the team. But this was a bad day for Gibson too, as the former United player saw his long unbeaten streak finally come to an end (unless you want to count the match he left early against West Brom with the score still 0-0). I suppose it's fitting that the streak ended at Old Trafford.

FA Cup up next on Saturday. Just win. 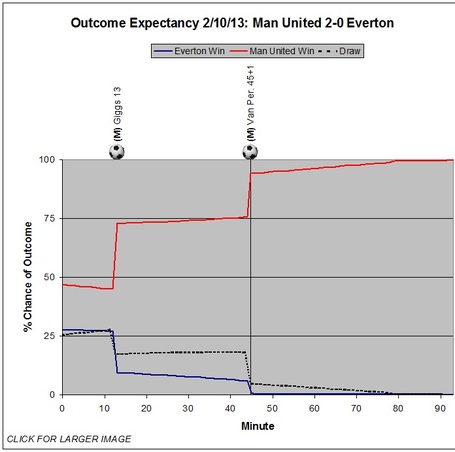