The draws for knockout competitions are usually much-anticipated affairs. The draw for the 2014 World Cup even more so. In some cases the storylines write themselves, in some new rivalries are born. The actual drawing of the teams tends to be a more convoluted process than it should be, more details here. FIFA usually attempts to keep teams from the same continent apart, all in the name of parity.

Today's draw in Costa Do Sauipe was marked by the presence of football stars past and present, among them World Cup winners and eternal bridesmaids as well. Without further ado, this is how it all shook out. 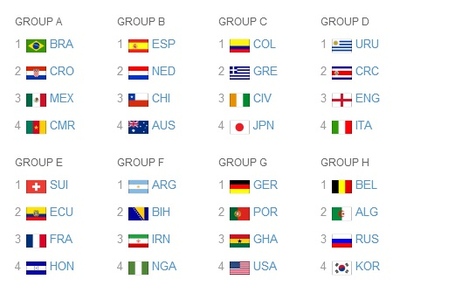 Here's a quick overview of what we can expect in each group - click on titles to read SBNation Soccer group previews.

Hosts Brazil will have little to complain about. Things could have been so much tougher for them, but under the circumstances they face a bunch of sides who have been wildly inconsistent throughout the qualifiers. On their day, any one of Croatia, Mexico and Cameroon are world-beaters, but will need to string together some solid performances to finish runners-up.

Defending champions Spain start their tournament off playing the Netherlands, a rematch of the 2010 Final. The Spaniards are of course one of the favorites and face two very good sides in the Dutch and Chile. Poor Australia and Blue legend Tim Cahill - they're in for a very rough ride.

South Americans Colombia are fourth in the FIFA world rankings, and should show their class. Behind them though things can be murky. Will Ivory Coast be able to field a cohesive unit? Have Japan developed any further than in previous tourneys? Can Greece muster up the defensive solidity that led them to a European Championship?

The term 'Group of Death' is bandied about pretty loosely, but this should be it. A certain Uruguay striker who need not be named is already detested in England - guess what happens if he puts the Three Lions out? What of Italy, can they muster up the cohesiveness from previous World Cups? Costa Rica are young and fast, and could play the spoiler role by getting one of the other three to drop points against them.

Definitely one of the weaker groups in the tournament. France, who struggled to qualify might be the happiest of the thirty-two nations tonight as they should go through without too much fuss. Switzerland are a talented lot and should accompany them. Ecuador actually finished above some more vaunted sides in South American qualification while Honduras gave a good account of themselves in the CONCACAF version.

Argentina can already start looking forward to the knockout round after being drawn in what should be a very straightforward group for them. Bosnia-Herzegovina are in their maiden world-level tournament, and their game against perennial African contenders Nigeria could decide second-place. Iran just do not have the wheels to compete at this level.

This one might be even more deathly than Group D. Germany always give a good account of themselves in international competition. Portugal struggled in qualification but on the back of CR7, romped through in the additional games. The USA have had easier group games in the World Cup, this edition might not look so good for them. Even Ghana have played the Americans hard the last two times and could play spoiler again.

Belgium are littered with stars in every position and could not have faced a more straight-forward path to the knockout rounds. Their only contest might come from Russia, who have been a much-changed side under Fabio Capello. South Korea have found it hard to win outside their continent while Algeria were not even expected to make it through the African qualifiers.