What did Everton do so well against the league leading Gunners? Here we take a look at the tactics board to see what the Toffees did right to leave the Emirates with a point.

Share All sharing options for: Everton at Arsenal: Tactical Analysis

(All images and statistics courtesy of fourfourtwo.com, powered by Opta.)

It's been bright days on the blue side of Merseyside in the past weeks, as Everton have launched firmly into the top four conversation. A draw against Liverpool, a domination of Stoke City, a historic victory at Manchester United all led up to a tremendous draw against the league leaders, Arsenal. The Toffees took nearly 56% possession from the Gunners at the Emirates, surely no small feat. But what led to Everton's possession victory, and ultimately the earning of a solid point? Let's take a look at the tactics board to find some answers. 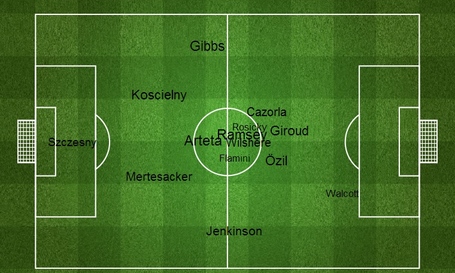 Arsenal's influence map shows a clear trend; they were intensely central. Aaron Ramsey and Mesut Ozil have both had phenomenal seasons for the Gunners thus far, and Mikel Arteta, Santi Cazorla and Jack Wilshere are all great players in their own right as well. But all these players would much prefer to sit at the center of the pitch, and that is exactly how things played out. This alignment left Arsenal weak against attacks coming down the wings, which Everton were more than happy to provide... 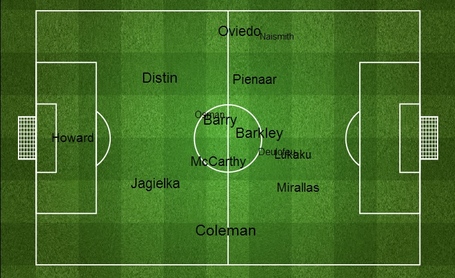 Roberto Martinez's boys played a picture perfect 4-2-3-1. Gareth Barry and James McCarthy were content to sit in front of the center-backs and keep danger from building where Arsenal wants to create their attacks. They played very important roles in this match, but certainly the stars of the game were Bryan Oviedo and Seamus Coleman. The full-backs provided much needed width, linking successfully with the midfield; Steven Pienaar and Oviedo exchanged 30 passes between the two of them alone! A quick look at the passing of Coleman and Oviedo shows how Everton outpassed Arsenal 434-317. 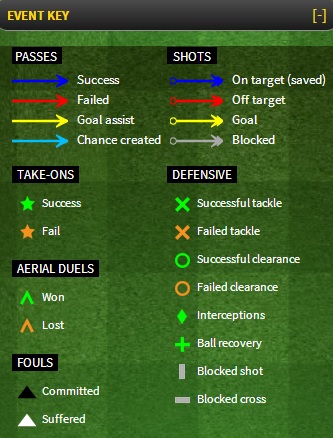 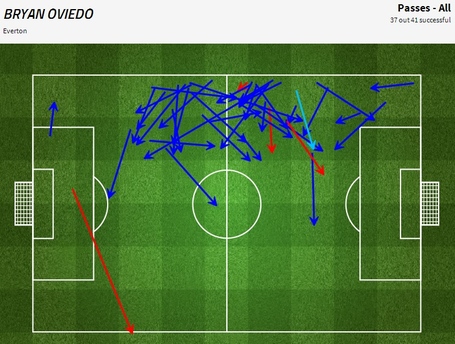 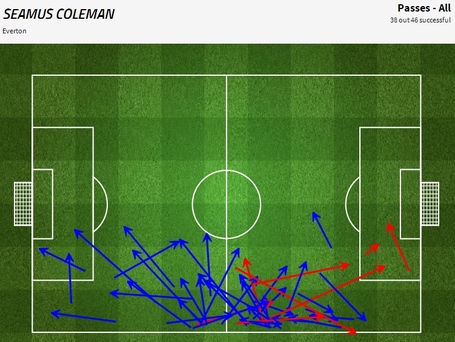 Coleman struggled a little bit with his passes in the final third, but both he and Oviedo were ever-present in the attack, and perhaps more crucially, constantly helping keep possession in the middle third. Between the two of them, only four passes in the middle third of the pitch failed to reach their target; a remarkable amount for how far up the pitch they were. And let's not forget that it was Oviedo's cross that ultimately led to Gerard Deulofeu's equalizer. Given that they did spend so much time in the middle and attacking third, one has to wonder how effective they could have been defensively. Surprisingly though, both were quite solid. 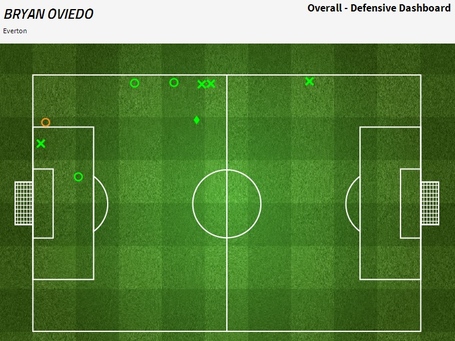 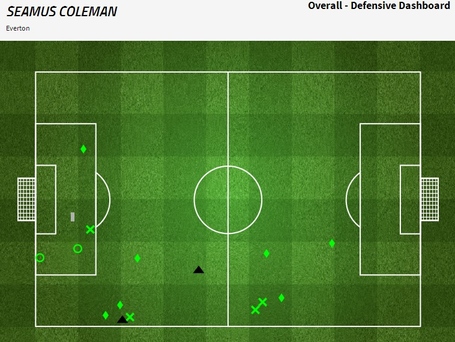 The full-backs combined for eight successful tackles, eight interceptions (seven of which were Coleman's), a blocked shot, and five successful clearances. Coleman, who has come under fire at times this season for his defensive play, and often rightfully so, stepped up in a big way to help shut down Arsenal's potent attack for much of the match.

While the whole team deserves credit for earning a point at Arsenal, certainly Oviedo and Coleman deserve special recognition; they were the key cogs in stretching the opposition, helped set up the goal, and played a very solid defensive match.