A horrific mistake by John Heitinga made this match seem closer than the scoreline would indicate, but in reality this was a fairly dominant win and a great overall performance by the Toffees. With results elsewhere going their way, it all made for a nice midweek pick-me-up. Stay tuned for a full match report...

- There were quite a few eyebrow-raisers in David Moyes's team sheet today, as Nikica Jelavic was dropped in favor of Victor Anichebe, Kevin Mirallas was apparently healthy enough to be thrown right back into the starting eleven, and Darron Gibson made the bench. All three players would play prominent roles in the match.

- The two teams spent much of the first 15-20 minutes feeling each other out and produced mainly half-chances. Romelu Lukaku wasn't getting much service for West Brom, while Everton clearly looked like the better side. Mirallas made his intent known with a dragged effort that missed the target before Anichebe came somewhat close himself, an awkward attempt that deflected off his marker and then off himself before going over.

- The game's first real scoring chance fell to Marouane Fellaini in the aftermath of another corner kick that Everton played short. While the Baggies cleared the initial danger, John Heitinga lofted the ball back into the penalty area where Sylvain Distin did very well to find Fellaini in front of goal. Ben Foster breathed a sigh of relief when the Belgian's shot deflected off the outside of the upper corner of the goalpost.

- However, Foster would not be so lucky on Everton's next attempt. The buildup play by the Toffees was terrific, as Baines passed to Mirallas who passed to Leon Osman who did brilliantly to pick out Baines streaking into the final third. The left back went for goal and just managed to find enough pace to elude the lunging Foster. As Goodison Park went berserk, Baines coolly accepted his teammates' plaudits. I like the way Baines celebrates a goal; in this age of Balotellis and Bales and Keanes it's nice to see a throwback.

- Okay, whenever they show Bill Kenwright in the stands he's almost always sitting next to this other old dude with a mustache. Now I'm not terribly familiar with everyone in the Everton front office so maybe I should know who this guy is, but every time I see him this is what I think of: 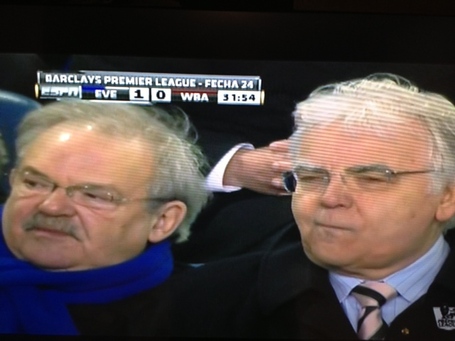 - George Thorne was stretchered off for West Brom near the end of the first half, and the delay meant there would be three minutes of stoppage time. It turned out to be a fortuitous ruling for Everton, as they were able to win a penalty (!) when Anichebe was clearly clipped inside the box. Steven Pienaar and Baines were at the heart of the play, working some of their trademark magic to find the big Nigerian forward before he was brought down. As expected, Baines stepped up to take the penalty kick, and he calmly sent Foster the wrong way to make it a brace and a 2-0 lead for the Toffees going into the break.

- West Brom really didn't come out of halftime with much urgency and even seemed a bit disinterested at times, allowing Everton a chance to make it 3-0 when Mirallas was able to cut inside and go for goal. But Foster was able to block the attempt and then catch Pienaar's followup bid, preserving his team's two-goal deficit.

- Then the Baggies were handed an absolute gift and a lifeline back into the match. A ball was played for Lukaku, who dribbled around Tim Howard after the keeper had come out of his goal. But without much to aim at, Lukaku's shot was blocked fairly easily on the goal line by Heitinga, who everyone expected to take the no-nonsense approach and clear the ball to touch. Inexplicably, the Dutchman tried to volley the ball forward but got almost nothing on it, perfectly teeing up Shane Long for a simple headed finish. Howard held his head in disbelief, as did plenty of fans in the stands. It was setting up to be a nervy finish.

- In fact, it was almost a complete meltdown by the Toffees minutes later, as they handed West Brom a free kick that Graham Dorrans struck sweetly and looked sure to have scored. Thankfully, the ball struck the crossbar and rebounded well clear of the danger area, but this was heart-in-mouth stuff for Everton.

- At this point, I think that the Blues did a really good job of pushing hard for a third goal which would have been the dagger. First, Anichebe looked like he had won another penalty for Everton when he was brought down trying to meet a cross from Gibson (who had replaced Mirallas moments earlier), but the referee looked the other way and Osman couldn't get to the rebound. Osman and Jagielka also saw a pair of speculative efforts go well over the goal.

- However, the best chance to make it three occurred during a sequence after Pienaar had seen his initial shot tipped over the bar by Foster. On the ensuing corner, Pienaar worked his way into some space and saw his first attempt blocked by a defender, but his second bid made it through the maze of bodies and struck the post. With plenty of gaping net to aim at, Osman unbelievably ballooned his shot way up into the Gwladys Street crowd. Awful, awful miss.

- But in the end, it was a miss that didn't come back to haunt Everton. The home side suffered no further scares on the defensive end of the pitch and managed to see out the 2-1 victory, making for a very happy Wednesday night for the blue half of Liverpool.

All in all, this was a really fantastic day for Everton. A win was obviously great to see, while around the league there were draws for rivals Chelsea, Spurs, Arsenal, and Liverpool. We've got to keep the momentum going now, as an Aston Villa side who look absolutely devoid of confidence at the moment come calling on Saturday. Show no mercy! 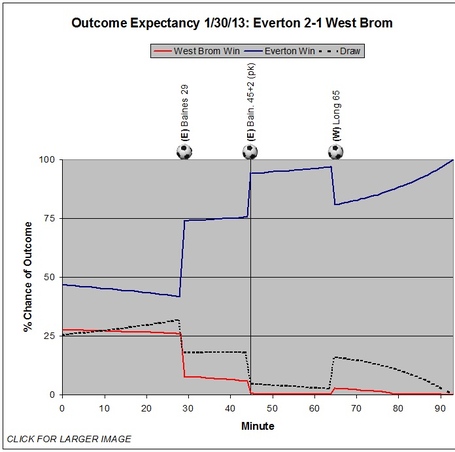