Don't score in the first two minutes if you want to win. This is what the last two matches have taught us, apparently. I have to say, I like this side of the coin much better.

- At least the Everton players wouldn't have to stress over finally keeping a clean sheet for the first time in forever, as that possibility was negated in the second minute of play. Tim Krul simply booted the ball the length of the pitch, but the ball was allowed to bounce untouched in the penalty area, a cardinal sin for defenders. As the ball looped high into the air, Papiss Cisse was there to head the ball in a high arc beyond Tim Howard's reach. It was a stupid, sloppy goal to concede, the type of goal we seem to like to give up recently.

- The Blues should be applauded though for keeping their cool and methodically working their way back into the match after going down early, much like Chelsea did on Sunday. A free kick taken by Leighton Baines was the first time Krul was called into action, and the Dutch keeper won the first of what would be several battles with the Everton left back as he made a brilliant sprawling save. Soon after that, Krul reacted well to smother a long pass with Baines and other forwards lurking nearby.

- Everton had an even better chance to score when Steven Pienaar broke free down the left with the option to go for goal or lay the ball off for a teammate. Pienaar opted for the latter, finding Marouane Fellaini for a shot that was only blocked after some desperate Newcastle defending. It wasn't Fellaini's best performance today and he took awhile to get going, but it's clear that his propensity for winning long balls and the opportunities that ability creates have been missed.

- Despite Everton's resurgence the Magpies still posed a threat, and they emphasized that point when James Perch did his best Nikica Jelavic impression off a free kick. The defender struck the post with a bouncing header, coming within inches of making it 2-0.

- But before the first 45 minutes were up, Baines vs. Krul III had been decided in favor of our favorite music blogger. First a foul was called on Cheick Tiote for a push on Fellaini, setting up a free kick for Everton from a reasonable distance. That allowed Baines to unleash an absolute screamer and instant goal of the year candidate, a swerving thunderbolt that Krul was helpless to stop. It was a punch that (figuratively) broke the back of one Alan Pardew, who was surely beyond frustrated headed into the break.

- Fellaini showed that he still has some rust to shake off when he carelessly turned the ball over shortly after the restart, and on the subsequent Newcastle attack Shola Ameobi worked his way into prime position in front of Howard. Thankfully for the Toffees, Ameobi was only able to flick the ball just wide of the mark. Not a very good start to the second half, however.

- Perhaps David Moyes sensed a change needed to be made, and the manager decided to make a rare pre-70th minute substitution by bringing on Victor Anichebe for the largely ineffective Steven Naismith. And it took all of two minutes for Anichebe to make an instant impact, scoring from what I believe was his first touch of the ball. Nikica Jelavic received a nice pass from Fellaini, and the Croatian did well to drag the ball away from his marker and find the streaking Anichebe for the goal. Everton led 2-1 with half an hour to play, but could they avoid conceding late and settling for another irritating draw?

- Newcastle had their chances to grab an equalizer of their own, but they kept coming up empty in the final third. No one was able to stop Gabriel Obertan as he slinked through the defense, but Howard dealt with the problem. Then Cisse had two bites at the apple after another long clearance from Krul caused trouble, but neither effort caused Everton considerable concern. No doubt Pardew was missing Demba Ba, the soon-to-be Chelsea striker.

- There was an opportunity for Baines to make it a brace when Fellaini was chopped down on the edge of the penalty area, but his free kick curled just wide of the post. It might have been a case of the ball being spotted a little too close to the goal, making it a tall order for Baines to beat the Newcastle wall.

- With time running short for a comeback, the Magpies really should have tied the game when the Everton defense allowed Davide Santon to glide into the area virtually uncontested. With all of the attention on the Italian, no one spotted Cisse working his way into position for what would surely have been a tap-in. But Santon decided to shoot himself (or maybe it was just a really bad pass), and Howard made himself big to keep the ball out.

- There were six minutes of stoppage time to give the home supporters some hope, which was mainly due to an earlier clash of heads between Anichebe and Phil Neville which left the captain bloodied and the striker severely dazed. But Everton were able to see out the game comfortably, and they escaped St. James' Sports Direct Park at Wonga.com Arena with three terrific points. 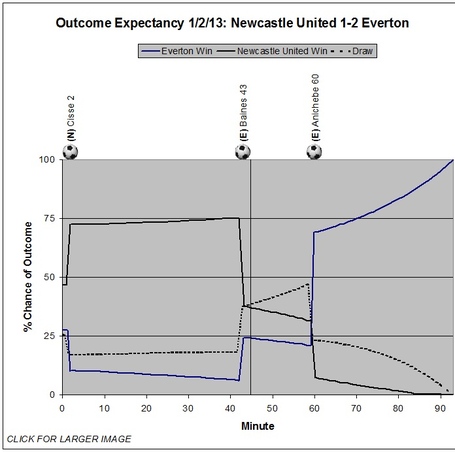