Everton were lucky that a terrible day by an overrun midfield only cost them two points and not the full three.

So that sucked. The first half of Monday’s loss to Southampton was by far the worst half of football that Everton have played this year. Improvements in the second half left the game being merely a disappointment as opposed to an unmitigated disaster But regardless, Everton lost a golden opportunity to pick up points on their chief rivals for fourth. Sigh. Anyway, let’s get to the grizzly details.

The game was the first time in a long time that Everton seemed absolutely shocked by what they encountered when they got on the field. Southampton were operating under a new coach so I assume that scouting and data gathering wasn't going to be as useful, but still it’s not like Everton have never seen a team press them energetically before. But, in possession they just didn't adjust. Leon Osman in particular had a horrific game. Look at his short passes. He failed to complete 13 which is a bad number on its own, but by my count 8 of them were in his own half. When part of your role is to be a holding midfielder giving away possession in dangerous areas like that is the biggest sin you can commit. He did it over and over and over. Although, somewhat unsurprisingly 7 of those 8 passes happened before Fellaini was dropped back to pair with him in the center of the midfield. But, lest we be tempted to draw the wrong conclusions, Fellaini also failed to complete 4 short passes in his own half. 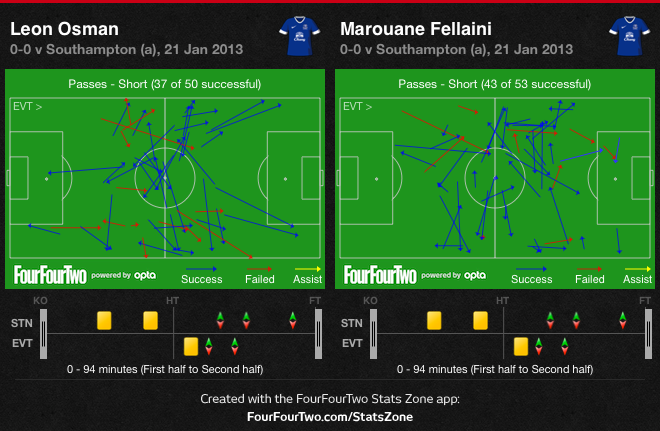 Everton’s midfield just had the wrong gameplan, and never really adjusted, and that put the defense under pressure the entire game. Although, I suppose if we are desperate for silver linings, then the Distin, Jagielka, Howard combination is the place to look. I thought the two defenders and goalkeeper probably played their best (maybe second best after the opener against United) game of the season under heavy heavy pressure.

It’s hard to look composed defensively when you keep giving the ball away in the middle of the field, but the problems in the first half went deeper than just the transitions. Southampton’s extra midfielder was quite effective in helping them boss the center. As with most things, Everton tend to deal with an extra opponent midfielder in two different ways. If they are playing a side they expect to be conservative they don’t ask Fellaini to defend, and instead rely on two banks of four, with Fellaini staying in position to receive an outball and initiate the offense. Or against top quality teams when not in possession Fellaini will drop further off and get goalside of the deepest opposition midfielder.

Moyes clearly wanted to execute the first strategy, and it clearly wasn't working. But, for some reason he didn't seem to want to go into a more defensive shell. Presumably he expected the Southampton team to tire, and the pressing and running to lessen after the first 20 minutes or so, and he wanted his team already prepared to be on the front foot. Honestly though, I’m just guessing. For whatever the reason Moyes instead decided to try swapping Fellaini and Osman. I assume the reasoning was that Fellaini’s defensive skill would be enough to halt Southampton’s momentum and Osman’s pace would allow him to shuttle better between attack and defense. It was a colossal failure. Fellaini, as usual, was fairly effective in his defensive role, but with him deeper, Everton’s midfield passing problems were just exacerbated (half of Fellaini’s incomplete short passes in his own half came during this time period) as they had no choice but to try and pass their way forward.

This is again where Gibson is sorely missed. Without Fellaini as a target, whether because he’s partnering in the midfield, or he’s just dropping deeper, Gibson is currently the only player on the squad who has the composure and passing range to take a touch or two under pressure and hit a good ball out wide to switch the play and key the attack.

And speaking of the attack, I think it’s time we all had a chat about Jelavic. I've generally been one of his biggest defenders, but I think it’s past time that Anichebe got a real look at taking his spot up front. Whether it’s just bad form, or that he’s a one trick pony that the league has caught up to, Jelavic hasn't been good for months now. And Anichebe has been stellar for much of the season. Even more than his recent inability to get out of his own way in front of net, the fact that he seems to have lost any ability to hold the ball up is damning. The fact that he’s an utter after thought in the game plan is ok if Fellaini and Mirallas are both firing on all cylinders, but when they aren't you can't afford the luxury of a one dimensional player who isn't even executing his one dimension that well.

The rest of the attack suffered from its normal problems. After Everton got their defense more or less sorted out in the second half, primarily by just using two banks of four slightly deeper, staying more compact, and conceding Southampton possession in the middle of the field, their offense achieved a little more cohesion. Although even then, the same old problems reared their ugly heads. The passing charts below show just how much this team misses Mirallas. Compare the first game against Southampton and this one. The only difference is Mirallas. All of the attacks through the right flank are just flat out gone, and effective as the left side is you just can’t consistently break teams down that way. As an aside you can also see on both charts a little Gibson sized donut hole right in the middle of the field, especially in the 3-1 game when Everton had more possession in the final third. 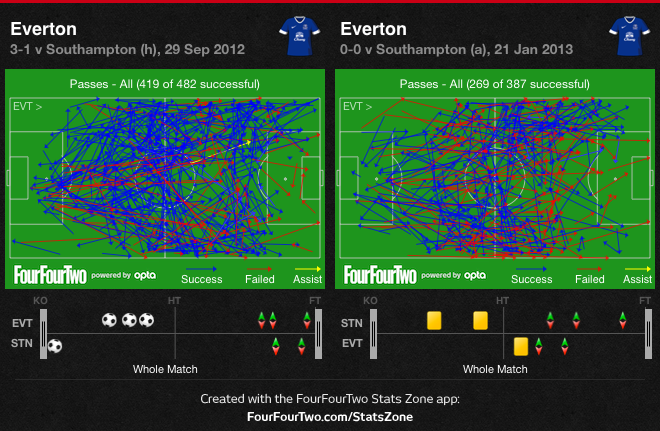 What a crappy game all around. New problems showed up, old problems weren’t solved, and we all get another disappointing result. Next up is Aston Villa, hopefully with even more Kevin Mirallas than the 25 minutes or so we got on Monday. If that’s not enough to salve some of our wounds than I’m not sure anything will be.