That's three straight hours of watching players kick a football aimlessly around a large rectangular field, if you're scoring at home. Let's relive the action, shall we?

- The first 45 minutes were unequivocally awful for Everton, and it didn't help that Southampton came out flying to start the match. When the Toffees did manage to gain control of the ball, they usually coughed it right back up due to sloppy passing and lackadaisical play in general.

- Phil Jagielka gave his manager quite a scare in an early exchange when he headed a Southampton cross narrowly wide of Tim Howard's post. Later, Seamus Coleman gave the ball away carelessly in his own half, which led to Jason Puncheon firing a shot that barely missed the same post that Jagielka had grazed moments earlier.

- Puncheon didn't do much else for the rest of the game, at least on the field anyway. Off the field though, well... let's just say he had a little emergency in the second half. Pure gold.

- Southampton's in-form striker Rickie Lambert undoubtedly caused the most problems for the Everton defense, showcasing a varied skill set that left Howard scrambling on more than one occasion. A long free kick from Lambert struck the post (though Howard, at full stretch, probably had it covered), and later he managed to elude Jagielka in the penalty area but was unable to curl his shot around the goalkeeper.

- Maya Yoshida and then Lambert claimed they were pushed inside the box, but the penalty claims were mild at best and laughable at worst. A better chance came when Gaston Ramirez gained control of the ball in the final thrid with an eye for goal, but Leighton Baines was able to push him outside just enough to make the save a manageable one for Howard.

- The chances just kept coming for the Saints, and they saw their best opportunity yet on a sequence late in the half. A corner kick was the source of the trouble, and when Lambert headed the cross past Howard it looked sure to be the opening goal. However, Nikica Jelavic was there to make a rare contribution by scrambling the ball off the line to Baines, while Jos Hooiveld's follow-up effort was saved by Howard. Desperate defending from the Blues, who were probably relieved to still be even at this point.

- Lambert had one final chance in the half's dying moments, but he again headed the ball wide of the target.

- Predictably, David Moyes had his troops ready to go coming out of the break, and Everton looked miles better in the second half. Maybe the best chance to break the deadlock was their first chance after the restart, when Marouane Fellaini chested down a cross from the right and fired his shot into Artur Boruc from a couple of yards away. Steven Pienaar had done well to pick out Coleman in the initial buildup.

- Unfortunately, that was to be Coleman's last contribution as he was forced out of the match with some sort of upper leg strain. Hopefully it's not serious, but it did open up a spot for Victor Anichebe which proved to be a positive substitution. Baines managed to pick out Anichebe, who had done well to hold his run and played a nice square ball for Jelavic. It looked like the perfect time for the Croatian to break out of his scoring drought, but Jelavic got his finish all wrong and lost the ball in his feet without even managing to get off an attempt. I think we can officially be worried about Jelavic at this point.

- Next it was Fellaini who found Anichebe on a similar play, but this time the striker decided to go for goal himself. Boruc was equal to the task, however.

- Without a doubt, the best news to come out of this match was the welcomed return of Kevin Mirallas. Though he had to be content with a spot on the bench, with the team in desperate need of some inspiration Moyes threw him on with twenty minutes to go. While it was obvious that Mirallas is not quite up to speed just yet, he still managed a pair of decent efforts in the time he was on the pitch. The first shot sailed wide and the second shot was caught by Boruc, but it was still hugely encouraging to see the injury-prone Belgian make an appearance.

- The rest of the match fizzled out without much drama, and the game ended in a second consecutive 0-0 draw.

While I was watching the game today, there was an old man I could see through my window who was sitting on his porch across the street. He spent the entire two hours spitting sunflower seed shells and watching the cars drive by, and he probably had a more enjoyable afternoon than I did.

In fairness, this was actually a somewhat entertaining 0-0 draw as both teams were not without their chances, but nobody could find that elusive thing that I believe is called a goal. Tim Howard gets Man of the Match for me for keeping the match scoreless in the first half, even though he didn't have any particularly difficult saves to make and mishit a few clearances.

Everton remain three points off the Champions League pace, but they really need to take advantage of the teams above them dropping points, and today they were unable to do that against a team they should definitely be able to at least score against. Thankfully, the schedule is cushy for a while longer, with an FA Cup trip to Bolton on Saturday followed by home dates with West Brom and Aston Villa. After that, things get considerably trickier. Three wins over the next three matches would be really, really good to see. 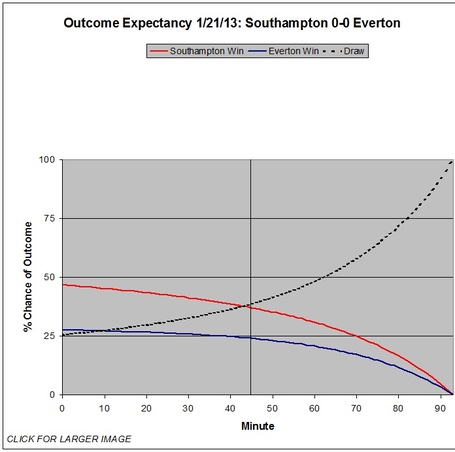