A study of ball possession in the Premier League, how efficient teams are at using it, and how this study specifically relates to Everton. The results may surprise you.

Share All sharing options for: An Everton Possession Analysis

We've heard it all season long: Everton are dominating teams but aren't making the most of their possession, wasting opportunities to kill off games and settling for too many draws. But is that really true? We generally believe what our eyes tell us, and I expect that you could count on one hand the number of Everton fans who disagree with that first statement. But as I found out, the numbers tell a bit of a different story.

The first thing I had to do for this analysis was figure out a way to determine a team's possession efficiency. This was done by figuring out how many minutes of possession on average are required for each Premier League team to score a goal, and then comparing the results. Here's how that table looks: 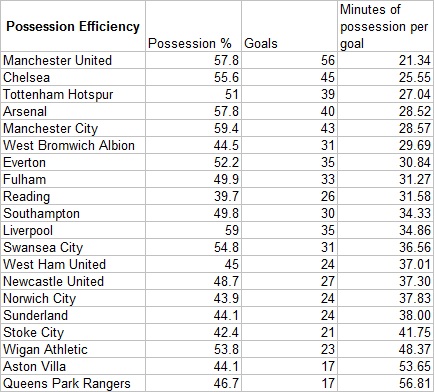 As you can see, Everton ranks seventh in the league in their ability to turn possession into goals, lower than their league position of fifth but not a substantial difference. What really struck me about this table is how closely it resembles the actual Premier League table, with only a few teams like Reading and Stoke City as outliers. It would seem there is a pretty strong correlation between possession efficiency and points earned.

But offense is only one half of the story, so I decided to run the same test for every team's defense; in other words, how efficient each team is at forcing the opposition to waste its possession. Here are the results: 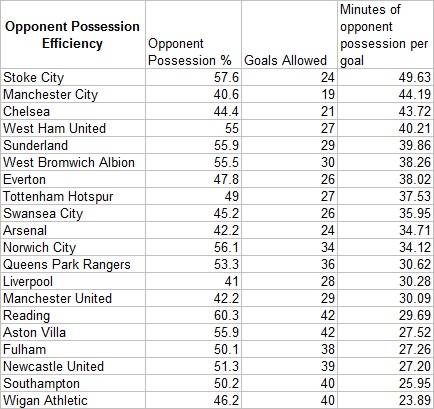 Again, Everton ranks seventh. This would seem to indicate that defensive efficiency is just as much of a problem as offensive efficiency for the Toffees, and that's assuming there actually is a problem somewhere. A ranking of seventh is not catastrophic in either category, but if Everton are going to reach the next level (i.e. the top four) they are probably going to need to improve in at least one of these areas. However, the point is that they don't necessarily have to start making more of their own possession if they can find a way to limit the efficiency of their opponents.

I also wanted to delve a little deeper into Everton's situation specifically, so I created a few more charts based solely on data from their games. The results were odd, to say the least. Check out these charts: 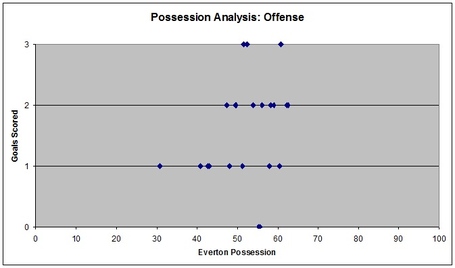 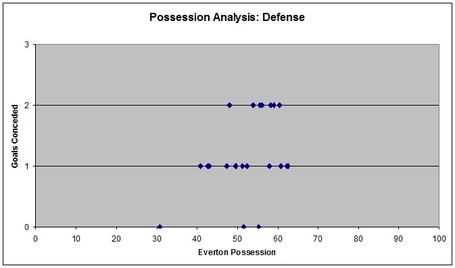 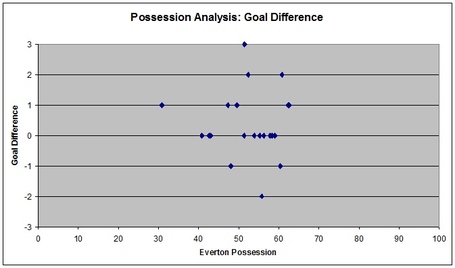 The blue dots on these scatter plots represent the 22 matches that Everton have played so far this season. As you can see, the x-axis in each chart shows the amount of possession Everton had in each game, while the y-axis shows goals scored (in the first chart), goals allowed (in the second chart), and goal difference (in the third chart).

What do you notice? If you said, "Nothing, Sean, it just looks like a bunch of random blue dots to me," you're actually right. You would expect to see a correlation between ball possession and goals, but these charts show only a very weak correlation (if that), and there are plenty of outliers among the data. While 22 matches is not a terribly large sample size to draw from, based on the information we have so far there doesn't appear to be a significant relationship between winning the possession battle and winning the game (for Everton anyway). It would be interesting to run this study across the Premier League, because I think you would find that Everton is actually the exception to the rule.

Here are a couple of more graphs that don't really tell us much but are interesting to look at:

The first graph shows Everton's results game by game, while the second graph shows cumulative results (like in the stock market). As you can see, after some early domination Everton have slacked a little bit in the possession department, though overall they are still having a fantastic year in that regard.

I suppose I have to draw some sort of conclusion to all of this analysis now, but I'm honestly at a loss as to explain why the normal rules don't seem to apply to Everton. While it's true that they have played some games they should have won easily based on the possession numbers, there have been other games in which they have done better than expected. I guess all you can do is continue winning the possession battle and hope that results normalize as the season goes on.