The 0-0 draw against Swansea illustrated that right now Everton have no fallback option when the Bainaarlaini monster isn't working.

As 0-0 draws go, last weekend’s game was actually pretty interesting. The defining storyline of the game was clearly Swansea’s decision to start natural fullback Angel Rangel as a right midfielder. So, let’s take a look at both sides of the ball and see how that one decision cascaded into every aspect of the game.

First, defensively, Rangel’s presence meant that Swansea really only had two players in attack, Nathan Dyer and Michu. That meant that the defensive pairing of Jagielka and Distin, with help from the covering Neville were more than enough to smother the attack. The game played into Everton’s strengths. No big strong attacker to contend with, and no pressure down Everton’s right to test Coleman. Nice and easy.

The problem of course, is that Rangel was effective in his intended role, limiting the impact of Everton’s left side. His job was basically to shadow Leighton Baines the entire game. I can’t honestly say I can remember another instance of a fullback being man-marked, but that’s what Rangel did. It certainly didn’t eliminate Baines and Pienaar from the game, and the pair will still able to create chances, and Baines specifically was able to get into deep positions and cross the ball, but it did largely stop the two left sided players from penetrating into the box.

Now, we’ve seen teams flood that side of the pitch before, and Everton have frequently reacted well by switching the play to the opposite flank, and attacking with a combination of Coleman and Mirallas. This game though, with Anichebe starting on the right, that was never going to work. As we’ve talked about before, Anichebe is basically a striker starting at right midfield, and his gameplan is to sneak into central areas, and finish moves that start on the left. He is not going to stay wide, and combine with a fullback to create overlaps, or pump crosses in, or take defenders on.

In effect what happened is that Coleman was left on his own to be a defacto right midfielder (with Neville to cover for him). And Coleman was very good, he found space cutting inside and creating a handful of chances, but since he didn’t have anybody to combine with he didn’t have very many passing options if he couldn’t get into a dangerous position himself. And that meant, that despite the space Everton weren’t able to create nearly enough chances from that flank. As you can see below everything remained slanted to the left. 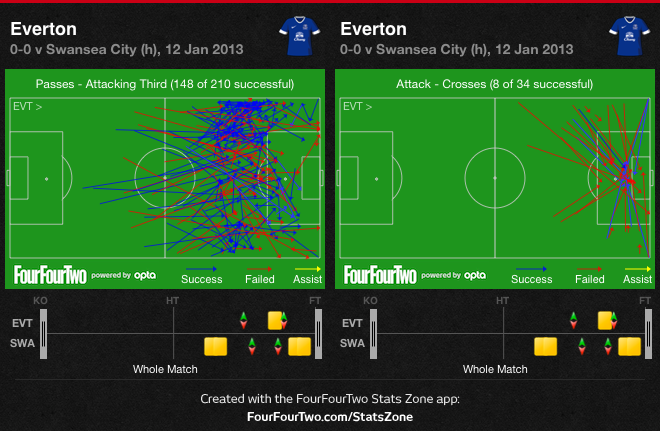 Another way to look at it is to compare Coleman’s passing with Baines’s. Baines has Pienaar to combine with, Coleman has nobody. That ended up with the ball going back to Jagielka 15 times (the third highest Everton pass combination). 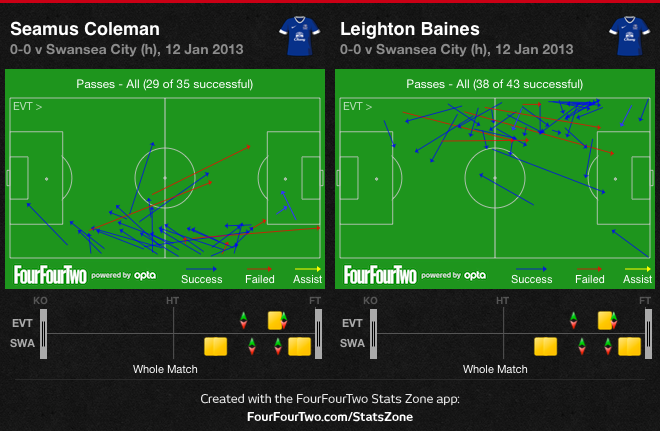 And what happened after Coleman was forced to go backwards with the ball, pretty much this every time (The 4th most and top pass combinations). 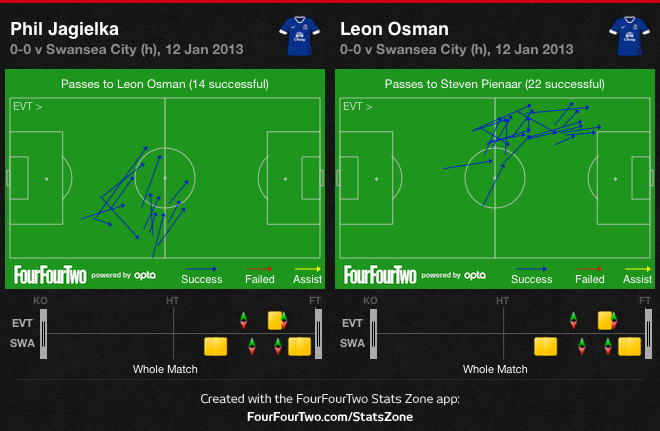 The ball kept getting funneled back to our left side, and Swansea kept being able to cope with that eventuality, it was like they kept kicking it into a brick wall, hoping one time to bust on through.

Brining on Naismith in the 70th minute left the team with the same problem, only now it was Naismith on the right with Jelavic and Anichebe up top, and Fellaini playing in support. I think the game probably called for Oviedo to come in as another true wide player. Maybe that means playing him on the right, or maybe it means switching Pienaar over to combine with Coleman. Either way you are either taking advantage of a lot of open territory or forcing Swansea to change tactics. But, Moyes opted to play it more conservatively and largely leave the attack plan unchanged.

The reality of the game was that once Swansea decided to play defense first and worry about scoring a goal second, this was going to be an uphill climb for Everton. They certainly have enough talent on the squad that an individual moment of brilliance from somewhere can cause a breakthrough, but systematically speaking with no Mirallas and no Gibson a patient clinical breakdown of a good well drilled unambitious defense is unlikely. The two missing players are the ones that provide the secondary options and creative unpredictability. Given that, it’s understandable that Moyes decided to hope that Plan A, even though it was well defended would eventually break through, instead of asking Oviedo to play a bigger role and shift the balance of play. It didn’t work this time. Hopefully though, with players coming back there won’t be a next time.