There was very little scoring in this game. In fact, you could even say that nobody scored. That would be an accurate statement if that is what you were to state. But hey, clean sheet!

- With transfer rumors swirling around Marouane Fellaini all week, the talismanic midfielder needed to block out the noise as he started in his typical position just behind the lead striker. When the defense opened up to allow Fellaini to take an early shot on target, the Belgian was only able to send his effort directly at Michel Vorm for an easy catch.

- A more challenging situation then developed for Vorm when he was forced to come all the way out of his 18-yard box to block the ball away from Nikica Jelavic. There was still a chance for Victor Anichebe to find the back of the net, but he couldn't produce the required finish.

- Jelavic had an even better chance to open the scoring when a lovely cross from Steven Pienaar picked out the striker right in Vorm's lap. But when Jelavic made contact with the ball, he wasn't able to hit it cleanly and his shot dribbled agonizingly wide. Still, Everton were looking dangerous enough and prevailing in the possession battle.

- The chances kept coming for Jelavic, but he still couldn't hit pay dirt as his header was cleared off the line by Dwight Tiendalli, who was guarding the post on the corner kick. Though the shot was probably going wide anyway, it was another missed opportunity for the Croatian striker. Jelavic continues to search for his first Premier League goal since his winner against Tottenham before Christmas.

- Anichebe then had his own effort cleared off the line, but this time it was Ashley Williams who did the honors. Seamus Coleman eluded a defender to carve out a great look for Fellaini, but his redirected shot was again sent straight into the waiting arms of Vorm. A free kick from the banged up Leighton Baines caused Swansea's defense considerable concern, but Leon Osman's header missed the goal completely.

- Somewhere in that flurry of Everton domination there was one fantastic chance for Michu, a chance that turned out to be the only real opening for Swansea over the entirety of the match. Thankfully for the Toffees, Tim Howard reacted in time to tip Michu's chipped effort over the top of the crossbar.

- Despite the lack of goals, the first half still provided some promise that a breakthrough was not far away for Everton; the second half, however, was a different story entirely. Credit should be given to the visitors for a rock-solid defensive effort, as Michael Laudrup undoubtedly organized his team extremely well.

- There were a few moments where it looked like Everton might scrounge up a winner. Phil Neville even had a rare sniff of goal, and though the captain said he was disappointed not to score on Twitter after the game it wasn't really a problem for Vorm to deal with. Sylvain Distin also came somewhat close, but his header over the goal was not kept low enough to truly worry the keeper either.

- Jelavic then headed the ball down into the path of Fellaini, but he was unable to pick the ball out of his feet to get off a shot from what would have been close range. More terrific defending from Williams, who along with Chico Flores was massive for the Swansea defense all day long.

- The Swans' game plan was clearly to shut down the Baines-Pienaar pairing and take their chances elsewhere, and the strategy worked to perfection. Everton's left-hand side was seriously congested and the situation only worsened as the match went on, with first Anichebe and then Steven Naismith unable to provide an adequate threat down the right to balance the play on the field. This is a match where it would have been really nice to have a healthy Kevin Mirallas available.

- Apostolos Vellios made his usual late-game token appearance as David Moyes tried desperately to find some offense, and Vellios did create one good look for Jelavic with time winding down. With a single touch Jelavic curled the ball with some pace, but the ball sailed just above the far post. Swansea used the rest of the match to show that they are extremely adept at time-killing tactics, and Everton had to settle for a frustrating 0-0 draw. It was the first time Everton had kept a clean sheet since shutting out this same Swansea team 3-0 on September 22, and it was the first time that Everton had been shut out themselves since losing to West Brom 2-0 on September 1.

On the surface, this result doesn't seem horrific or embarrassing or anything like that, but it's still a decent blow considering Spurs dropped points at Loftus Road earlier in the day. However, there is a good chance that Spurs could drop even more points next weekend as Manchester United come calling, so at least the draw for Everton more or less maintained the status quo. This team desperately needs Nikica Jelavic to find his confidence again, and fast.

Well, I guess I had better get back to watching #SuperSunday. Although, one has to wonder if that moniker would be trending on Twitter right now if Everton (and not Liverpool) were playing United. Hmmmmm... 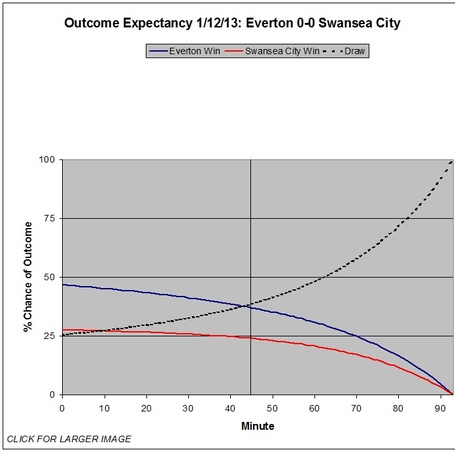