Did you hear that horrible high pitched chalk on a blackboard sound this weekend? That was the screeching halt to Everton’s stellar start. So, it’s in the cold harsh unforgiving light of a no longer perfect season that I once again break down the numbers for you. Take heart though, because after the jump I’ll tell you why it’s really not as bad as you think it was.

I think it’s important to contextualize this weekend’s game a little bit. There was a time when Everton would have walked into the stadium this week playing for a draw. A year ago, in their first road game against a woeful Blackburn Rovers side, David Moyes fielded a team that consisted of Victor Anichebe more or less alone up top and central defender John Heitinga in midfield. And while they ended up winning the game after a last minute (questionable) penalty, they gave up a penalty of their own and conceded twice as many shots as they earned. It was ugly to say the least.

A year later things are very different. For the second straight road game Moyes started an attacking midfield duo of Darren Gibson and Leon Osman. Everton walked into the stadium planning to play on the front foot. Not only that, they have enough fire power that WBA decided that their best plan was to bunker down and try to counter attack. Everton was allowed to possess the ball freely in its own half with very little pressure, as WBA dropped deep to prevent them from building attacks through long balls to Fellaini and Jelavic. Leighton Baines, Phil Neville and Sylvain Distin were Everton’s leading passers with 50, 46, and 41 passes respectively as opposed to Baines, Osman, Pienaar, and Gibson last week against Villa who all had over 50 passes (Baines appears on both lists, but as we all know he is just that awesome). And of course the flip side of that coin is that WBA limited the amount of long balls that Everton could successfully play. Look down below and you can see that not only did Everton not complete nearly as many passes as they did against Aston Villa, the ones that they did connect on were more lateral and less vertical, stymying their preferred attacking method. 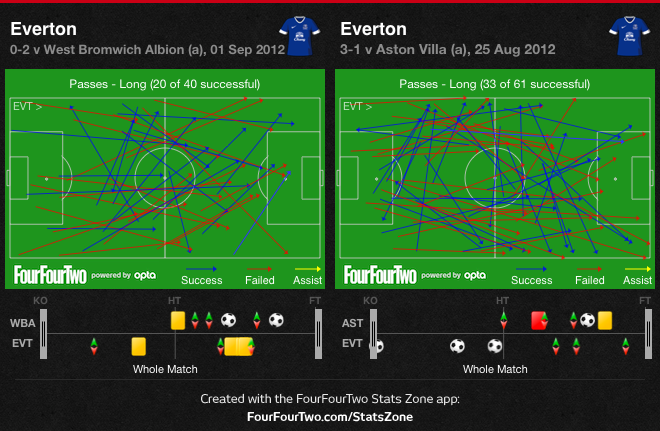 That’s a major reason why the Darren Gibson injury was particularly difficult to handle this weekend. Moving Neville from right-back to midfield and putting Hibbert in at right-back worked completely into WBA’s gameplan. With the long balls the Fellaini and Jelavic being limited, Everton’s best option was to keep the ball on the ground and work it forward with Gibson and Osman combining with Naismith and Pienaar cutting in from the wings and playing through the middle. But, Neville doesn’t have that game, and his presence in the middle really inhibited Everton’s attack. That’s a situation that was further exacerbated by Tony Hibbert not being able to handle the defensive duties of the right flank by himself. One of the benefits of playing Neville on the right in defense is that he reads the game well enough to give Naismith the freedom to roam all over the field from his right wing position. Hibbert, while he has plenty of positive qualities, needs the protection of a more traditional right winger in front of him. The upshot was a lack of service to the attacking players, which made chances harder to come by. Below I have both Fellaini’s and Jelavic’s receptions in the last two games. You can see that they just didn’t have nearly as many chances in dangerous areas. Fellaini had to come deeper into the midfield to get the ball, and Jelavic was just starved of service completely. 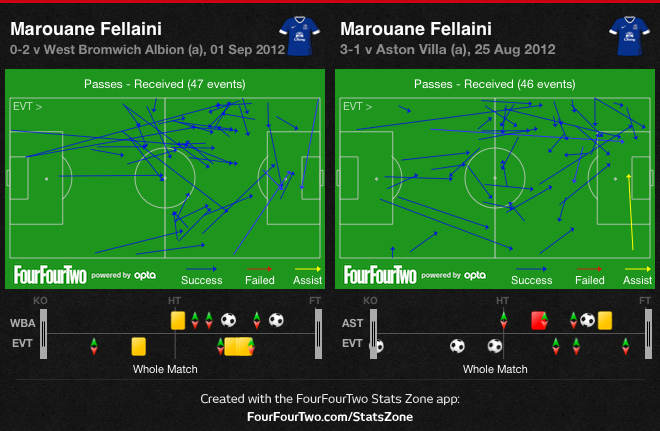 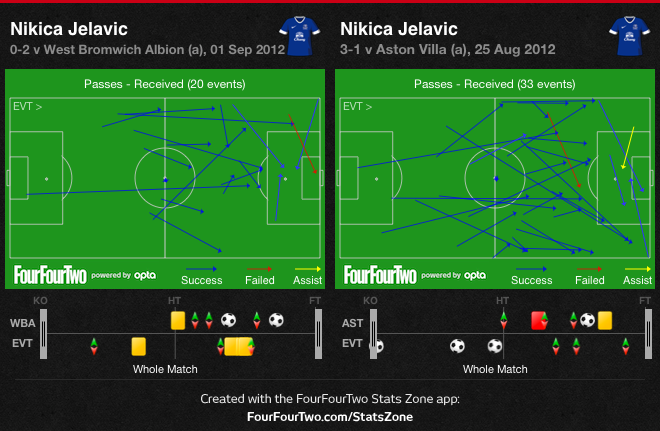 All that said though, Everton were completely competitive in this game. They had more shots (13 to 12), more possession (55% to 45%) and were much more efficient with the ball in the attacking third (completing 104/148 passes to 55/105 for WBA). Their biggest downfall was an inability to put the ball on the net, with only one of their shots finding the target. And, don’t discount WBA’s performance. They have been stellar so far this season, and their big physical defenders matched up well with Fellaini. They executed a well-conceived game plan to perfection, got the benefit of an Everton injury and bad finishing, and won a close game. Everton fans are conditioned to view each bad performance as the beginning of the end, to permanently fear the return of drab, negative, pray for a point, performances. I don’t think that’s what this was though, I’d file this one under, sometimes it happens, come back and get ‘em next week.

If there’s any real negative to take away it’s that even after all the additions in the transfer window, Everton’s midfield remains dangerously thin. When Gibson had to come off, many fans, including a number that write for this site wanted Moyes to bring on a second striker in Mirallas and drop Fellaini deeper into midfield. I don’t think that’s a good solution. Fellaini has become the heart of the Everton attack when he’s high up the field, and moving him further from the goal just isn’t good for the team’s attacking health. Just because Mirallas is a striker doesn’t mean he’s automatically better for Everton’s attack than Fellaini up high. On the other hand, clearly Neville isn’t a good attacking option at all in midfield. So, after Gibson, and Osman in the middle, Moyes needs to find another offensive option. I’d be curious to see if he will be willing to try Naismith in that role (especially if the rumors that Landon Donovan is coming in January prove to be true). With a week off though, hopefully Gibson will be ready to go after the international break and nobody will miss a beat, we’ll all be able to forget this game ever happened.