Another day, another scintillating show put on by Everton in the league. For a while there in the first half it seemed like there might be a historic scoreline in the cards, but a quiet second half will suit David Moyes just fine. Can you say "2nd in the Prem"?

- Everton sniffed around the Southampton goal in the opening exchanges as Baines and Jelavic worked together to worry the visitors, but soon enough it was the home side that was facing an uphill battle. Southampton won a somewhat questionable corner which was then served into the area for record signing Gaston Ramirez to nod home with the greatest of ease. It was shocking defending, as Ramirez drifted clear of Leighton Baines unnoticed by the rest of the defense. Even so, the cross wasn't anything special and Tim Howard really should have caught it or at least punched the ball clear. So just like at Leeds on Tuesday, Everton trailed early in the match, and the concern around the ground was palpable.

- Buoyed by the quick start, Southampton looked fairly comfortable for the first fifteen or twenty minutes, pressing Everton high up the field and forcing Phil Jagielka and John Heitinga to bypass the midfield in order to move the ball. There were a couple of warning signs from Everton however, as Marouane Fellaini helped a free kick into a dangerous position before Frazer Richardson headed over the goal line. After another clearance, John Heitinga was gifted a free header on the second corner but shot into the arms of Southampton's keeper Paulo Gazzaniga.

- Everton were then given a legitimate fright when Ramirez sped easily past Heitinga and was through on goal, seemingly poised to give the Saints a shock 2-0 lead. However, the Uruguayan's effort was disappointing and dribbled wide of the mark. I think that this was really the key moment in the match; if that ball goes in then the entire complexion of the game changes from that point forward, and it would have been very difficult for the Blues to recover.

- Thankfully, the breakthrough was coming in short order, and when it did arrive the man most responsible for the goal would be Kevin Mirallas. Everton was finally able to build up an attack from the back, and when Mirallas received the ball he fearlessly took on the defense before floating a ball that neither Nikica Jelavic nor his marker could control. But thanks to a fortuitous bounce, the ball found its way to Leon Osman in a prime scoring position. Osman really couldn't have missed the target if he tried, and by virtue of some decent football (and a bit of luck to be sure) Everton had their equalizer through Osman's first goal of the year.

- Galvanized, it was at this point in the match that the Toffees asserted their complete dominance. Indeed, you would be hard pressed to find a 25 minute period in the David Moyes era in which Everton played more attractive football. The second goal was pure eye candy, as Fellaini played a neat little pass to spring Mirallas again, who in turn found Jelavic streaking down the left-hand side. From a fairly severe angle, Jelavic unleashed a vicious shot that was out of the reach of Gazzaniga and settled neatly in the side netting. 2-1! Gazzaniga will have some questions to answer over his positioning, but it was still a fantastic finish by Jelavic.

- Why settle for scoring one goal when you can make it two? It was Jelavic's turn again, this time set up by a fantastic cross from the right by the enterprising Seamus Coleman. Once more, Jelavic had a difficult angle to work with, but he somehow managed to get sufficient power behind his header to squeeze the ball past the dreadful Gazzaniga and well over the line. An enormously impressive brace for the Croatian... Everton were scoring for fun.

- As the second half began, many Everton fans (including some of us in the GameThread) were dreaming of hat tricks and gobs of more goals, but it just wasn't to be. I guess you could characterize the second half as a mild disappointment in that regard, but really there can't be any complaints as the Blues saw out the game comfortably.

- Really, there was very little to talk about in the final 45 minutes. It was an inauspicious start to the half, with the crowd not quite in the game after the goal fest earlier. Southampton finally managed to regain some possession without ever really troubling Howard. Jelavic had a somewhat decent chance to make it three on the other end, and he would have secured the hat trick if only the game was being played in an elevator.

- Osman probably came the closest to scoring the fourth goal, curling a rare Everton shot from outside the box that looked for a moment as if it might find the inside of the post. Alas, the ball skimmed inches wide. Credit Jelavic with another nice play to control the ball with his body before feeding Osman.

- Mirallas had the other real opportunity for Everton in the second half, as Southampton's defense fell asleep for a second which allowed the Belgian yards of space and ages to pick out a corner. Unfortunately, all Mirallas could manage to do was shoot into the palms of Gazzaniga.

- Despite the fact that it felt like Everton already had the game won, the feeling was deceiving and Southampton nearly made it a grandstand finish when Ramirez did well to stay onside and chip deftly over Howard. However, in the end the shot was woefully lacking in accuracy and missed the goal all together.

- The last bit of the game was mostly a flurry of substitutions and trading of possession, as both teams simply played out the string. The referee Lee Probert (who had a solid game it should be noted) blew the final whistle, and the match ended 3-1 in Everton's favor. A job very well done indeed, and a much needed response after the dour effort at Leeds.

I have a feeling that Jelavic is going to win the poll going away, but personally I just couldn't let Kevin Mirallas's game today go unnoticed. He has been impressive ever since he arrived on Merseyside, but this might have been his coming out party. It's obvious that he has the talent to be a very, very special player in the Premier League, and it has been wonderful to see how quickly he has taken to his new teammates and to playing in England. Keep it up Kev!

So after six games in the league, Everton's record stands at four wins, one draw, and one loss, for a total of 13 points. As I type this, Tottenham is defeating Manchester United 3-2 at Old Trafford. If that result holds, Everton will have sole possession of 2nd place in the Premier League, three points off the pace of league leaders Chelsea. In October. Next up are two away games, albeit at relatively weak sides (Wigan and QPR). Then it's derby day. You hate to try to project ahead, but damn, that could definitely be 6, 7, or even 9 points. 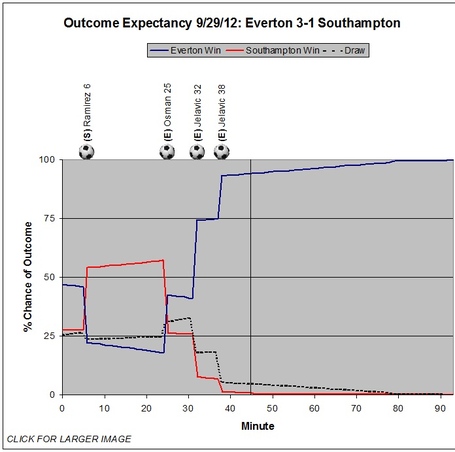