This weeks tactics focuses on gazing longfully into the genius eyes of David Moyes, as well as pulling a complete 180 degree flip-flop from last week and lauding a fantastic Victor Anichebe.

I’m usually the voice of caution. As a numbers guy, I’m the one who says things like, "It’s a long season," and "you’re never as good as you look when you win, or as bad as you look when you lose." But today, after the thing of beauty that was this week’s game, even I am throwing all of that out the window. Now is the time to dream, throw caution to the wind, think about top four finishes and European glory (and the paychecks that come with it). Get excited folks because the game doesn’t get much better than how Everton played it this weekend.

Tactically speaking the most important moment of the game came before kick-off. With no Jelavic, no Gibson and no Hibbert it looked like injury was going to force Moyes’s hand. When the lineups were announced it seemed that there was no other viable option than Neville returning to fullback and Fellaini shifting back to the role he played last year, central midfield destroyer. It wasn’t ideal, but it was certainly understandable. Everybody expected the team to look like this.

Except that’s not how they lined up at all. Instead, Coleman for the first time I can remember played in defense at right-back, and the team lined itself up this way.

Moyes made a bold, aggressive, risky, attacking decision and it was one Swansea were thoroughly unprepared for. As you can see clearly in the player influence maps below, the entire first 23 minutes (up until Anichebe’s opening goal) was spent right where Everton wanted it, the left attacking wing, with Osman, Pienaar and Baines making runs off of Fellaini. 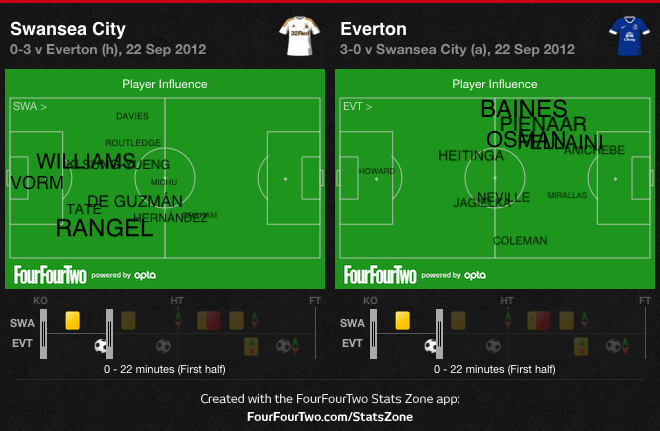 And while you have to give the players their due (which I will in just a minute), the real star here is David Moyes. Put yourself in Swansea Manager Michael Laudrup’s shoes. Your team is well known for possessing the ball, your opponent has traditionally played very conservatively on the road, and is injury ravaged to boot. Then, the lineup sheet comes out, and you see the defensively oriented selections you expect. So, you send the team out with instructions to expect Everton to sit back and absorb pressure and counter-attack. You anticipate Everton ceding possession in favor of defensive compactness. And then that’s doesn't happen at all, not even a tiny little bit. Instead, Moyes has the boys flying around doing what they’ve done all season, long balls to Fellaini, followed by possession in the attacking third. Think about that. Moyes created a situation in which Everton could attack the exact same way they’ve been doing it all season, and yet still catch Swansea completely by surprise, all by moving Seamus Coleman to right-back. If that’s not tactical genius I don’t know what is.

It’s also a testament to the versatility of the squad Moyes has at his disposal. Because, if his gambit hadn’t worked, if they hadn’t controlled the game, or if Swansea had exploited Coleman, then they always had the option of reverting to the expected lineup. That’s another of the little treats that Fellaini brings to a team (actually for that matter so does Phil Neville), the ability to play two widely disparate positions. It’s hard to prepare when you don’t know where the opposition is going to lineup. Although I expect that as the season wears on and Fellaini continues to be parked up top it will become increasingly difficult to con opposing managers into believing he will be anywhere else.

Now, as promised, onto the awesomeness of the players. Specifically, I’m going to highlight Victor Anichebe. (I think we can all agree to pretend I didn’t spent like a thousand words killing him here last week, right? Never happened.) He did everything a fan (or coach) could possibly ask of him. Perhaps the biggest surpise in his game on Saturday was the maturity and patience in his hold up play. Below are both the passes he received and the passes he attempted. 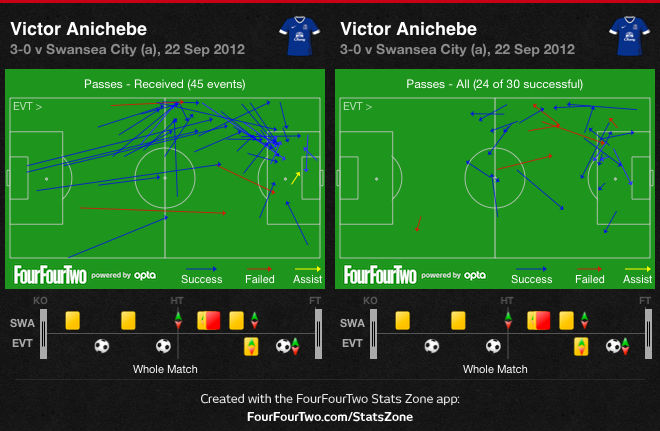 A few things stand out. First, on the receiving side he made himself available for long distribution out of the back. That’s very important because Moyes wants Fellaini drop deep behind the ball and help defend when the opposition keeps possession for long stretches so the forward becomes the only outlet to break the pressure. Its a role that Jelavic excels at, but Anichebe has historically been unable, unwilling or uninterested in filling. Second, as you can see from the cluster of passes he received in the corner of the penalty area, he consistently came to the ball and made himself a target for the Pienaar, Baines, Fellaini trio to find, and as the passes played graphic shows, he distributed from that position quite effectively as well. That brings me to my last Anichebe point. His passing was so much more composed than last week. He had an 80% completion rate, and all 30 of the passes he attempted were short, with 22 of them going sideways or backwards. There was clearly a focus on safety and build up instead of ambitious creativity. Some of that was a function of generally receiving the ball deeper, instead of having to drop back towards midfield to get it, but that also he means he spent a lot of time laying the ball off to teammates in and around the penalty area instead of always looking to shoot himself (although he did shoot a whopping 10 times as well).

I could go on and on forever about this game, posting pretty graphs with lots of blue lines, but the bottom line is this-- everybody who played against Swansea did their job. They dominated every area of the game from beginning to end. This was darn close to a perfect performance, and its one every Everton fan should bask in the glow of for as long as possible. If you can’t watch that game and get excited about this team’s prospects then being a sports fan may not really be for you.