There are some weeks where it’s hard to come up with an angle to talk about. In a long season there will be plenty of dull and dreary affairs to move on from as quickly as possible. Clearly this was not one of those games. There are enough talking points after the Newcastle game to fill a month’s worth of posts. For the sake of sanity, both mine and yours, I’ll ignore the refereeing and instead focus on the front and the back of the Everton squad. So take the jump and watch me try not to have an aneurism while I talk about Victor Anichebe.

Let’s start with this. I really don’t like Anichebe. Despite that I cannot deny that he does one thing very very well. Some would say that one thing is more important than all the other things a striker can do. He puts the ball in the back of the net, which he did again against Newcastle. Get him the ball around the penalty area with a little space to either run at a defender, or turn, and he is almost never wasteful. However, it’s a testament to all of the things he doesn’t do that despite that ability to score goals I’m never happy when he comes on the field.

First, Anichebe could care less about his defensive responsibilities. It was a telling moment last night watching the newcomer Kevin Mirallas scream at Anichebe after the Nigerian failed to close down a centerback. Mirallas who had been running his brains out all night (I thought he had a pretty good game, and was especially impressed at how willing he was to commit to running and defending. We’re talking about somebody who led the Greek league in scoring last year, and is used to being up top, so the selflessness was encouraging to see), closed down, and then watched a sauntering Anichebe not even bother to pretend to move towards the defender who received the ball. It’s a lapse you don’t see from any of the other forward players on the squad.

Second and perhaps even more importantly, while Anichebe might be a very good finisher, he offers nothing in the build-up. One of the most notable aspects of the game last night was how in control Newcastle was in the second half. For long stretches Everton seemed unable to settle the ball and transition out of their own half into sustained possession and attack. Two things changed in the game that made that happen, the first was that Newcastle brought on Demba Ba, and I’ll look at what that did to Everton’s defense in a minute, but the second was that Anichebe was up top and not Jelavic. Below is a comparison of Jelavic and and Anichebe’s passing stats. 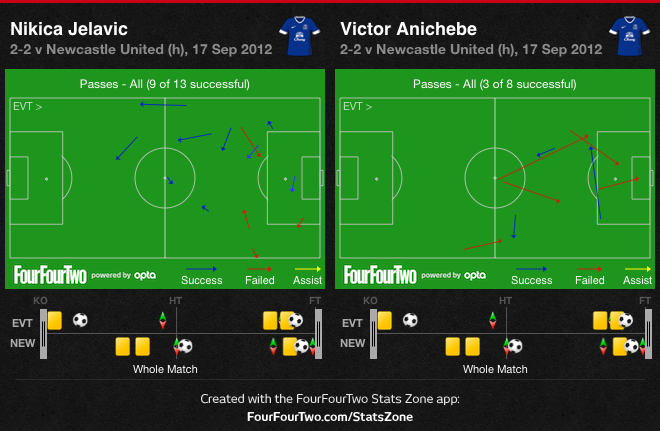 As you can see they are very different. Jelavic consistently plays short safe passes. Of his 13, only 1 was a forward pass, and all of them were short. It’s a symptom of a player holding the ball up with great skill and allowing his team to transition. Anichebe on the other hand only 8 total passes, of which only 3 were successful. The 5 he didn’t complete were all forward, the 3 he did, backwards or sideways. Jelavic is clearly happy to receive the ball and then lay it off to creative players while he gets forward into goal scoring positions. Anichebe, however, is looking to create for himself. Maybe that wasn’t a problem in past years when the creative talent on the team wasn’t what it is now, but in this year’s version it’s not good. Every time Anichebe doesn’t lay the ball off it takes opportunities away from Pienaar, Osman, Nasmith/Mirallas who are all streaming forward from midfield and looking to create chances with the ball at their feet. Jelavic was getting them the ball, and that made the attack work, Anichebe wasn’t.

That was part of what changed in the second half. The other part was the introduction of Demba Ba. The combination of Ba and Cisse at the forward position gave Everton fits, and forces me for the first time this year to take a good hard look at some potential defensive liabilities. Subbing Marveaux out for Ba had a huge impact on the game. Tactically it meant that Newcastle ceded the middle of the field, giving Everton the 3 v 2 numbers advantage there in order to play more directly from the back. And if you compare the number of long balls, and maybe even more importantly the percentage of them completed, you can see a real change in tactics. 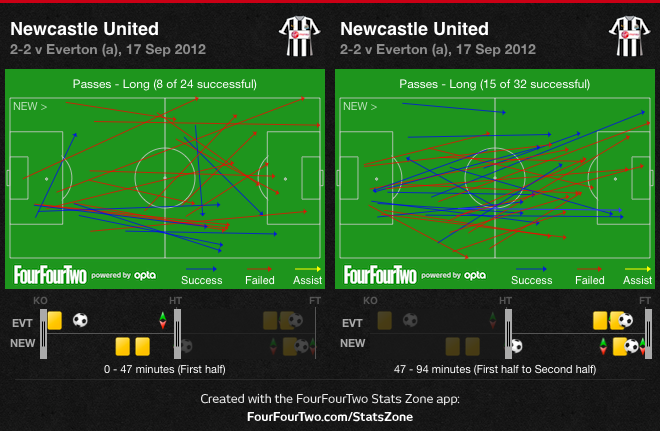 It was obvious that this caused some real defensive problems. In a lot of ways Jagielka and Distin are typical Moyes players. They read the game extremely well and are rarely caught out of position, but neither of them is a physically imposing player. And they spent most of the second half being tortured one on one by a much more athletically gifted Newcastle duo. Additionally, they received very little help. Ideally in this circumstance either the fullbacks or a defensive central midfielder would drop deeper to add extra numbers in defense, but Everton isn’t built that way at the moment. Baines and Hibbert are both small, sideline hugging players, sentencing them to assist in aerial battles in the middle of the field is pointless and a waste of their skills. And despite Neville’s presence in the midfield, he isn’t a physical presence either. Much like Distin/Jagielka/Hibbert, his strengths lie in reading the game and breaking up plays on the ground before they develop. He isn’t going to be effective shielding defenders from long balls.

There was, of course, one player on the field who could have filled that role admirably. The question though, as it will be all year is where is Fellaini most valuable. With a 1-0 score line I think it would have made sense to shift the field a little, park Fellaini in front of the back 4, move Mirallas up top and shove Osman wide. Good luck trying to lob long balls over that hair all day. But, since Newcastle equalized so quickly after the start of the half, Moyes never had time to make that adjustment (not that it’s a given that he would have) and at 1-1 the calculus shifts again. Already missing one target man, moving Fellaini deeper at that point takes away all of Everton’s attacking thrust, so I’m not going to complain about not making the change when you need to score to win.

All in all, a very interesting game, even if the refereeing kept it from being an enjoyable one for Everton fans. There were a lot of positives, but the exposure of Everton’s lack of athleticism at the back is a real eye-opener and definitely something that will need to be watched going forward, although as with many of their depth problems, there don’t seem to be any easy solutions.