As Sibi said in the GameThread, this is why you can never feel comfortable fully committing to Everton: you just know that a performance like this is right around the corner. In this match, the Toffees showed a worrying lack of ability to adapt, and it cost them dearly as West Brom thoroughly outplayed them and were good value for their 2-0 victory. Making it worse, the team will have to wait over two weeks to right this wrong, as the ever so pointless September international break is upon us.

- The first portion of the match was a feeling out period, as each team sized up the other, reluctant to concede the first goal. In retrospect, this might have been a moment for Everton to press their opponent, but as it was very little of note was created in the early going. Marouane Fellaini made a hard tackle on Jonas Olsson, a common theme throughout the game as Fellaini was much clumsier than he had been in the team's first two games. Claudio Yacob slid in hard on Steven Pienaar, who for a moment looked like he might have a problem with his ankle, but was able to continue after taking a long time to get off the field and then back on.

- Shortly thereafter, there was a key moment in the match when Nikica Jelavic was brought down clumsily inside the box. The traveling Everton support roared for a penalty, but none was given. Looking at the play, it's hard to determine for sure what the correct call was and really it could have gone either way. Unfortunately, Everton drew the short stick on this occasion.

- The game was disjointed but Everton were still looking reasonably stable for an away game... that is, until the 20th minute when Darron Gibson was forced off with what appeared to be either a groin or hamstring injury. The play he was injured on looked innocuous enough, but the impact of the substitution was anything but. Tony Hibbert came on which pushed Phil Neville into midfield, and from that point on the Blues looked unsure with possession and lacking in confidence.

- That point was driven home when Liam Ridgewell found space down the left after some lackadaisical play from Fellaini, whipping in a cross that Shane Long met and headed dangerously off of the crossbar. The ball was eventually cleared, but it was a statement of intent by West Brom and a sign that the Blues' fortunes were beginning to turn.

- Everton fashioned one of their better chances at the other end, with Fellaini meeting a long cross from Hibbert with his head. For a moment the ball seemed destined for the wide expanse of goal that Ben Foster had left unguarded, but in the end the header sailed harmlessly over.

- Right before halftime West Brom really should have taken the lead, as James Morrison somehow found himself unmarked and through on goal with only Tim Howard to beat. However, he took far too much time to get a shot off, and Howard was able to save brilliantly on his eventual attempt on goal. I'm still not sure exactly what Phil Jagielka and Sylvain Distin were doing when they should have been tracking Morrison's run, but in any case it was a shaky end to a shaky half for Everton's central defense.

- The second half got off to a weird start, when Fellaini was not allowed back onto the pitch until he had the correct color of tape on his socks! Apparently, Fellaini using white tape instead of blue tape for the entirety of the half would have been catastrophic, but the Belgian was back on the pitch after a minute or two.

- The teams traded half-chances. Youssuf Mulumbu was lurking and ready to strike when Hibbert eased a cross away at the last moment, while Fellaini (apparently onside) gathered a nice setup from Jelavic and fired just wide of the mark. On the other end, Jagielka blocked a tame free kick from Graham Dorrans, which was Dorrans's last contribution of the game.

- Kevin Mirallas was finally introduced in the 62nd minute for Steven Naismith, a change that probably could have been made at halftime. It didn't take long for Mirallas to play a clever ball for Fellaini, who found himself with plenty of space from close range but could only balloon the ball well over and into the stands.

- Fellaini would rue that missed opportunity, as seconds later Everton trailed for the first time this season. Shane Long was the goalscorer, slotting home a precise pass from substitute Peter Odemwingie that was placed perfectly between Jagielka and Distin. Though it was a good move and a good finish, it was still a poor goal to concede considering Long evaded two Everton defenders and the goalkeeper.

- The Toffees did their best to pull back even, but West Brom's defense was stingy and doing very well to congest Everton's usual attacking outlets. Mirallas got off a decent effort, but a deflection stole all of the shot's power and Foster was able to catch comfortably. That was probably Everton's best chance to equalize, and on the other end West Brom were getting closer and closer to a second. Distin and Neville committed fouls on the edge of the box, though the resulting free kicks were wasted. Morrison shot well over on a corner, and Howard did well to parry a high-velocity shot from Mulambu.

- Finally, the Baggies wrapped up the game and secured the three points when Gareth McAuley headed a Chris Brunt corner past a wayward Howard and cleanly into the back of the net. There is no doubt that it was a mistake by Howard, who found himself in no man's land and in two minds between punching and staying back. In the past Howard has sometimes had trouble with indecision on plays such as these, so it's troubling to see some of those concerns crop back up.

Difficult to pick a Man of the Match from that performance, but while he didn't have one of his better games I thought that Leighton Baines at least did his best to keep things ticking, and there was no doubt that the left-hand side was our only chance of generating scoring opportunities. Jagielka and Distin were both pretty bad, and you have to wonder if Distin's place in the team is under threat, especially considering our Player of the Season is currently sitting on the bench. Naismith also had a stinker, and in hindsight it seems like Moyes may have made the wrong decision starting him over Mirallas.

This loss comes down to a failure to adapt. Everton couldn't adapt to the loss of Gibson, and they couldn't adapt to a pair of powerful central defenders who were able to essentially shut down Fellaini. Make no mistake, Jonas Olsson and Gareth McAuley won this match for West Brom. Things aren't always going to go Everton's way, and if they want to win a spot in Europe this year they're going to have to find a way to take points from games like the one we saw today. Hopefully they spend the next two weeks thinking about that and come out strong against Newcastle after the break.

Also, what a way for Darron Gibson's unbeaten run in the league to come to an end. The cherry on top of an awful day. 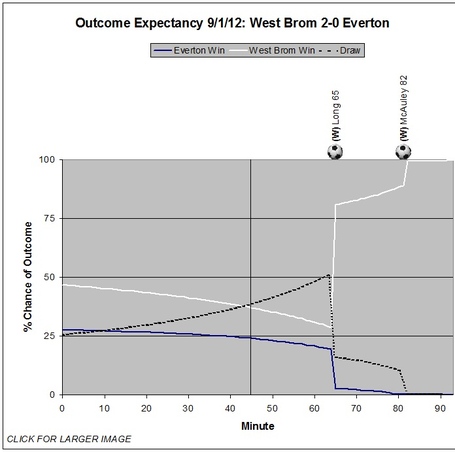