Two games, two wins, six points, four goals, and much rejoicing, starts don’t get better than the one Everton is currently enjoying. I’m going to note up front this week that it’s hard to make any generalizations from this week’s trouncing of Villa. An early goal often completely changes whatever the managers had planned, and Ciaran Clark’s straight red card for Villa in the 58th minute effectively ended what was already a 3-0 game. It’ll take a little digging to find some meaningful long term takeaways. So get your number shovels ready and let’s take the jump.

The most striking thing about the match this weekend is how different Everton looked from last Monday. There was only one personnel change, Hibbert picked up a knock and was unavailable, but that meant that Neville shifted from central midfield to fullback, and Osman came in from the right wing to partner with Gibson in the center. So, the new man in the squad, Steven Naismith started on the right side of midfield. The Osman, Gibson pairing is a very effective one, but it is also very offensive minded, and it’s one that Moyes has generally avoided, preferring to have a true tackler, usually Fellaini, paired with the more well-rounded Gibson or Osman. For a manager who in the past has been quite conservative on the road against weaker opposition it was encouraging to see the aggressive choice.

And that choice clearly impacted the game. Everton came out determined to control play. They maintained possession and passed the ball around in a complete reversal of their plan against Manchester United. They possessed the ball 61% of the time, and completed 425 (out of 507) passes which is well more than double the 196 they completed against Manchester United. What’s interesting and unique about this Everton squad though is that even when they play the possession game they still use the long ball quite effectively. They completed 33 out of 61 long balls, so over 10% of their passes attempted were long. Compare that to Manchester United last week, who completed 571/646 passes, but only passed long 40 times, completing 25,. All of which is a long and dry way of saying the team played the ball long but then retained possession and passed the ball around to create chancess.

One of the clearest ways to show the difference is to look at the difference between how Osman played this weekend in the middle of the field, and how Neville played last week against Manchester United. Below you can see where they played their passes from. Osman got forward to combine with Baines, Pienaar and Fellaini and overload the left hand side. Neville on the other hand was tasked with staying at home in the middle of the field and breaking up Manchester United attacks. They are different players, who have different roles, because they are good at different things. They just happen to play the same position sometimes. 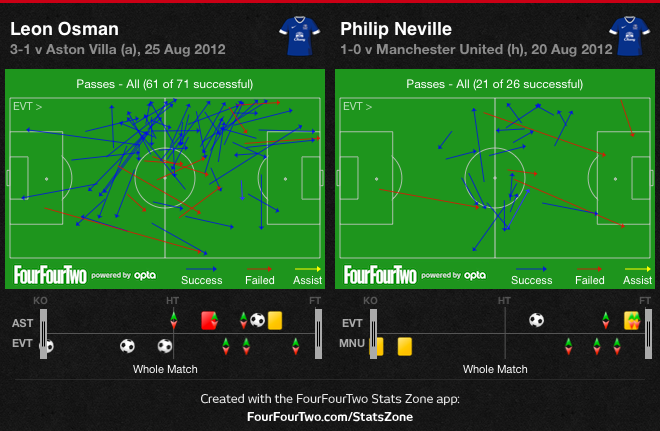 Another place you can really see the difference is in the play of Leighton Baines. The left-back is a brilliant offensive player, but against Manchester United he had very few opportunities to join in the attack. Everton’s ability and desire to hold the ball against Aston Villa meant that Baines had time to make his incisive off the ball runs, and receive passes deep in the corner where he could do great awesome Leighton Baines type things with them. He created 7 chances from open play, and 1 from a corner kick, as opposed to just 3 from open play against Man U. Although Baines did create 2 chances from corner kicks last week, just proving that even when he doesn’t have the ball he still finds a way to make an impact. 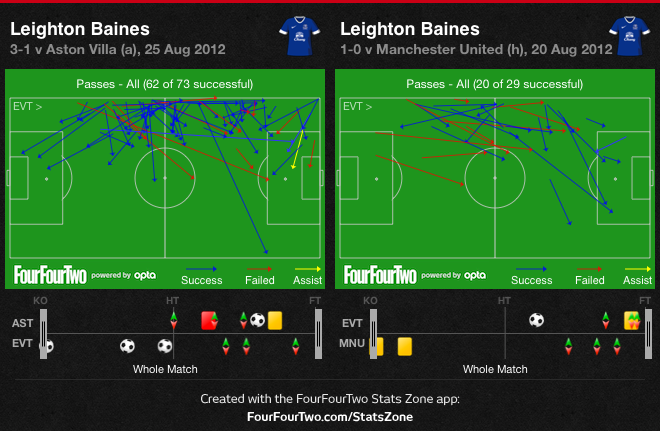 Yet another thing that sustained possession does is allow players to have more creativity and freedom of movement around the pitch. When a team is as defensively drilled as this one is (I’d talk more about it in this game, but really they had nothing to do, Villa had only two shots on target, both from distance) they can move around aggressively on offense to drag defenders out of position without fear that they themselves might be leaving gaps behind them. Pienaar and Naismith on the wings both had relatively free reign to move into more central positions, and at times clear across the field to create plays. Those moves were directly responsible for the first two goals. Pienaar had room to line up his beautifully struck shot from outside the box on the left side thanks to Naismith moving to the left edge of the penalty box to open himself up for a pass which he then laid off to Pienaar. And on the second goal, it was Pienaar who moved to the right side to play a pretty combination with charging center back Jagielka who put in the cross for Fellaini. That kind of player movement can’t happen if a team isn’t stringing lots of passes together. 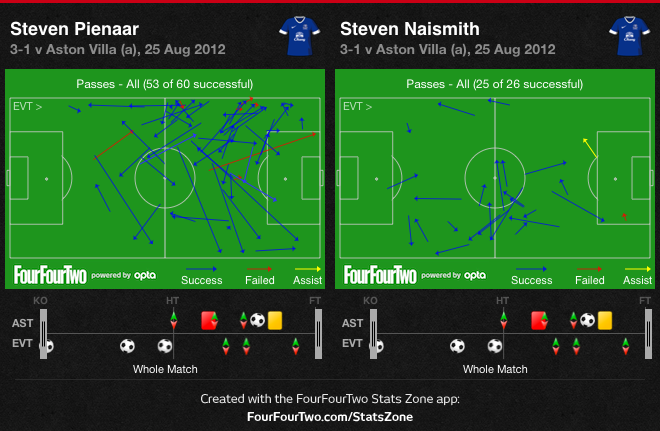 The past two weeks really are a testament to the incredible diversity of this team, and this coach. Moyes can sometimes be mislabeled as rigid and uncompromising, because he tends to play the same formation all the time and focus on defense first. But, if the past two weeks have shown us anything it’s that Everton has the ability to play tremendously different styles within the confines of that system, and Moyes is unafraid to deploy those wildly different approaches as he sees fit.