Can’t stop reliving last yesterday’s fantastic season opener? Don’t worry, neither can we. I’m sure we’ll all be talking about this game for a while, and hopefully in that wow beating Man U really launched us on a magical season kind of way, and not in that it’s sad that the first game of the season was the high point, kind of way. But regardless, today is a day for celebration. And your daily dose of celebration is about to be delivered in statistical form. So, if you’ve ever wondered what a giant fro-headed Belgian looks like when graphed, take the jump.

It really is impossible to overstate exactly how dominant Fellaini was in this game, and just as important how heavily Everton relied on him to be the focal point of their offense. The entire team completed only 196 passes, and 53 of them went to Fellaini. For those of you not doing math at home, that’s 27%. That’s huge. Shinji Kaga, by far Manchester United’s best player on the evening received the ball on only 12% of United’s passes. Now, of course, that’s by design. Everton wanted to play through Fellaini, and only through Fellaini, specifically to exploit the makeshift right side of Manchester United’s defense. While Valencia and Carrick are both fine midfielders, and in spells might be capable defenders, clearly neither had the physical capability to deal with Fellaini.

And it wasn’t all about aerial domination in the penalty box. One of Fellaini’s biggest contributions was bringing Piernaar into the game. As you can see below there is a cluster of six passes on the left all of which are a direct result of Fellaini receiving long balls, and knocking them down and playing them off to Pienaar so that the winger could continue to orchestrate the attack. For a player who’s footwork has perhaps been questioned in the past it was a fantastic, consistent display of how the focal point of a long ball attack should receive and distribute. 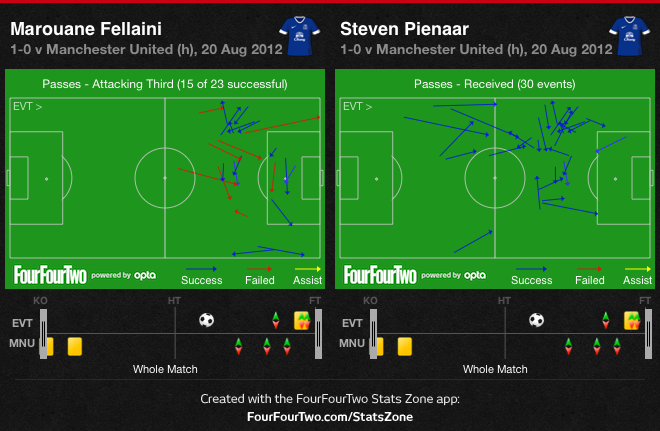 While Everton’s offensive strategy was pretty easy to see for anybody with two eyes, their defensive strategy was a little more complex. First, I want to talk about Leighton Baines and the left side a little bit. Several times Baines was beaten over the top forcing Distin, or Jagielka to cover. It seemed, though, that it was a conscious tactical choice to stick Baines close to Nani, and not give him time to receive passes and turn. The idea was to concede the over the top ball and trust the coverage, rather than give Nani time to run at defenders and link-up with Valencia down the right. And it worked well, as Nani was frustrated early, and had comparatively little impact on the game.

In general, baiting United to try long balls over the top seemed a good strategy given the amount of clever passing and playmaking that they have in the middle of the field. United didn’t bite though, attempting only 40 long balls out of their whopping 646 passes. But United’s commitment to passing the ball around and playing through the middle wasn’t a rousing success either. It’s an extremely rare stat line to see one team, Manchester United, have 69% of the possession, but have less shots and less shots on target. Those numbers are a testament to the typical David Moyes discipline that the team showed in containing and the excellent positioning of the Distin and Jagielka who just refused, sometimes at the last minute, to be passed around.

Let’s look at some specifics. First, Everton did press in certain limited circumstances. Generally it was the rare times when Fellaini didn’t win an aerial challenge from a goal kick or other long dead ball situation. Then Jelavic would press the ball, with Pienaar and Osman flying in from the wings, with one of the two central midfielders focusing on closing down Scholes to make sure he couldn’t orchestrate a quick transition. This was reasonably effective, and you can see that 6 of Everton’s 16 successful tackles came in Manchester’s half. Most of the time, however, after conceding possession Everton would drop off and defend deep. The focus was to keep United from passing through them and getting in on goal. It’s quite startling to see the suddenness in the chart below of how about two yards out from Everton’s penalty box Manchester United’s passes just stop. Again, it wasn’t always pretty, and sometimes it was as last ditch as you can imagine, including one brilliant clearance off the line by Jags, but the organization and shape of Everton held effectively enough to keep a clean sheet. 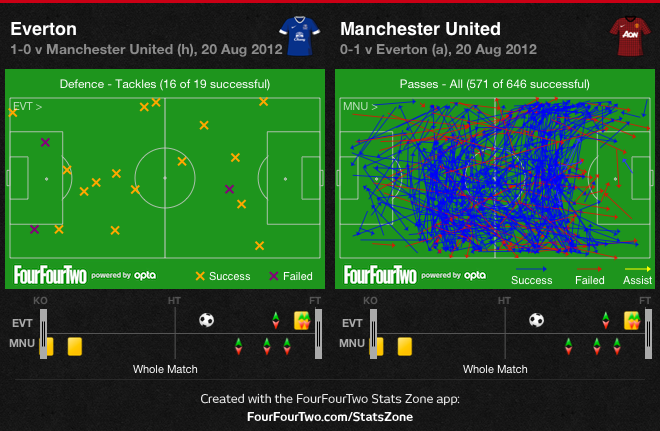 And when United amped up the pressure even more as they searched for a late equalizer, Everton were very effective at shifting the ball to the areas they felt capable of defending. Before they needed to equalize United weren’t particularly concerned with crossing the ball attempting just ten crosses. As the game closed, and Everton’s interior defense remained disciplined and organized, United were forced to move the ball wide to the only places they had any space to work. They crossed 24 times in the last 35 minutes of the game, and more importantly only two of them were successful. That’s not an accident; it was Everton’s game plan. The midfield dropped very deep to help the defense, to the point where at times it looked like Everton were playing a 6-3-1, and they funneled the ball out wide, made United hit a contested cross, and trusted the fact that their defenders are very strong in the air. 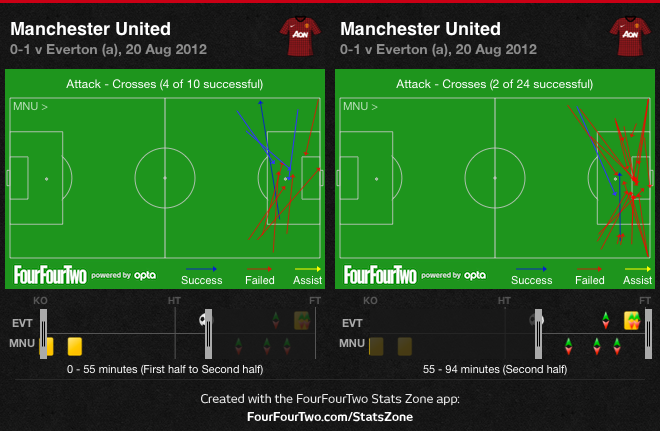 Overall Moyes got his tactics completely right for the opener, and the team rewarded him by executing to perfection. It’s a fantastic way to start a season, and it’s the first time anybody’s been able to say that about Everton in a long long time.