Forget all of that. Wipe it away, rip it up, set fire to it, whatever you want. Those scorelines are ancient history, because Everton just beat Manchester United on opening night.

- Even watching on television from across the pond, Goodison seemed as raucous as I can ever recall. Off the top of my head, the only game that might top this one was the return leg against Fiorentina back in 2008. Perhaps there have been better atmospheres, but they can't have been much louder than this. Goodison was a cauldron.

- It was clear from the off that Everton was feeding off their crowd and ready to put up a fight to the death. A glancing header from Leon Osman that never troubled David De Gea was the season's first attempt. Nani was his usual arrogant self in the opening minutes, somehow avoiding a booking for dissent before earning the yellow card moments later for a challenge on Leighton Baines.

- The first real scoring chance of the season fell appropriately to Marouane Fellaini, who slithered free of his defenders before firing a cheeky shot from a severe angle that rattled the post. Looking at the replay, De Gea had left some space for Fellaini to aim at, but it proved to be too small a target for the Belgian.

- The Red Devils also had a few chances to grab the opener, but nothing that seriously spooked the Everton defense. Nani's low driving effort sliced wide of the mark, and a Wayne Rooney free kick was tipped around the post by Tim Howard, though it was probably going to miss anyway. Near the end of the half, United had perhaps their best chance of the match, as Rooney found himself in front of goal and free of his marker after a nice turn. However, he was only able to shoot tamely directly into the waiting arms of Howard, who didn't need to move an inch to make the stop.

- Meanwhile, Everton continued to play some really fantastic football, as a beautiful buildup from Baines, Steven Pienaar, Leon Osman, and Nikica Jelavic resulted in a corner. On the ensuing play, a long-range header from Pienaar was punched over the bar by De Gea, who was looking difficult to beat and enjoying a fine first half. After another great buildup, Pienaar found himself open for yet another opportunity on goal, which De Gea again saved. The rebound was at too tight of an angle for Jelavic to handle.

- Before the half concluded another great chance fell to Osman, whose pointblank shot was saved by De Gea after a brilliant header from Fellaini provided the service. Soon after that, Baines was back at it, whipping a trademark curling free kick that had the accuracy but didn't quite have the power to beat a sprawling De Gea.

- Before the fans had barely had time to settle back into their seats after their halftime pint, Osman had rattled the underside of the bar, the best scoring opportunity of the match to that point. Tony Hibbert, who was putting in his usual workmanlike shift, had set up the chance with a long, accurate cross.

- Manchester United was dominating possession, but Everton was looking the likelier to score by a wide margin, and the breakthrough finally arrived in the 57th minute. Pienaar won a corner, which Darron Gibson took (as an aside, I thought it was intriguing that Gibson, and not Baines, took the majority of the corner kicks). Meeting the cross, Fellaini outmuscled a helpless Michael Carrick, firing a powerful header into a gaping net for a 1-0 lead. Cue pandemonium.

- As expected, United upped the pressure in the minutes immediately following the goal, and they would have scored the equalizer had Jagielka not been there to clear Paul Scholes's unchallenged shot off the line. Nani also narrowly avoided going through clear on goal, but Baines was there to ease the ball out for a corner.

- At that point there was still just under a half hour left to play, and the tone of the match changed considerably. Predictably, David Moyes hunkered down for a long, painful defensive stand to try to make our precious goal hold up as the winner. What was remarkable, however, was how poorly United adapted to the shift in the flow of the game. Robin van Persie began warming up seconds after Fellaini scored, and was introduced in the 68th minute.

- As a whole, the second half didn't quite provide the same plethora of chances that the first half offered, but the tension was ratcheted up significantly. There was still plenty of energy around the ground, but it seemed like more of a nervous energy to me, as everyone associated with Everton willed the clock to move faster.

- United huffed and puffed but were mostly limited to long-range attempts, as the Everton defense staunchly refused to allow them inside the box, whether through the air or on the ground. Finally, after what seemed like an eternity, Andre Marinner blew his whistle and the match was over. The supporters belted out "Grand Old Team" with pride, the players left the field grinning from ear to ear, Bill Kenwright was crying like a baby. Good times indeed!

I don't know if I'll ever give out a perfect 10, but Marouane Fellaini came as close as any Everton player I can remember seeing play. He simply dominated every aspect of the game, and United had no answer for him. It will be very interesting to see which position he settles into as the season moves forward, considering how good he looked playing the Cahill role today. However, I think his versatility will continue to be an advantage for Everton. Phil Jagielka was immense today as well, his goalmouth clearance perhaps being the moment of the match.

Now, of course, the trick will be to see if Everton can sustain this early success. The result today was obviously fantastic and will go down as one of Everton's most memorable openers, but it doesn't yet mean that the Blues have bucked the trend of starting slowly. A loss or even a draw against a toothless Aston Villa team on Saturday would undo a lot of the strides that were made tonight, so let's just hope and pray that they can keep this up. But until then, we'll enjoy what was a truly famous night at Goodison Park. COYB! 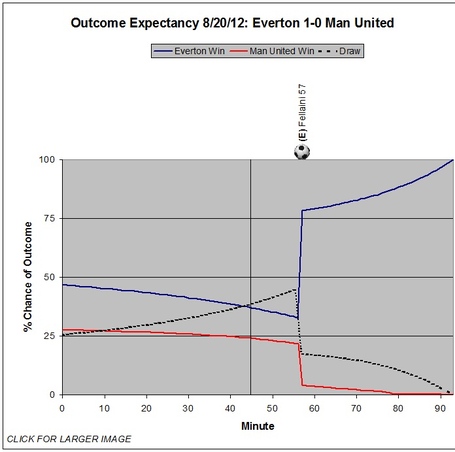